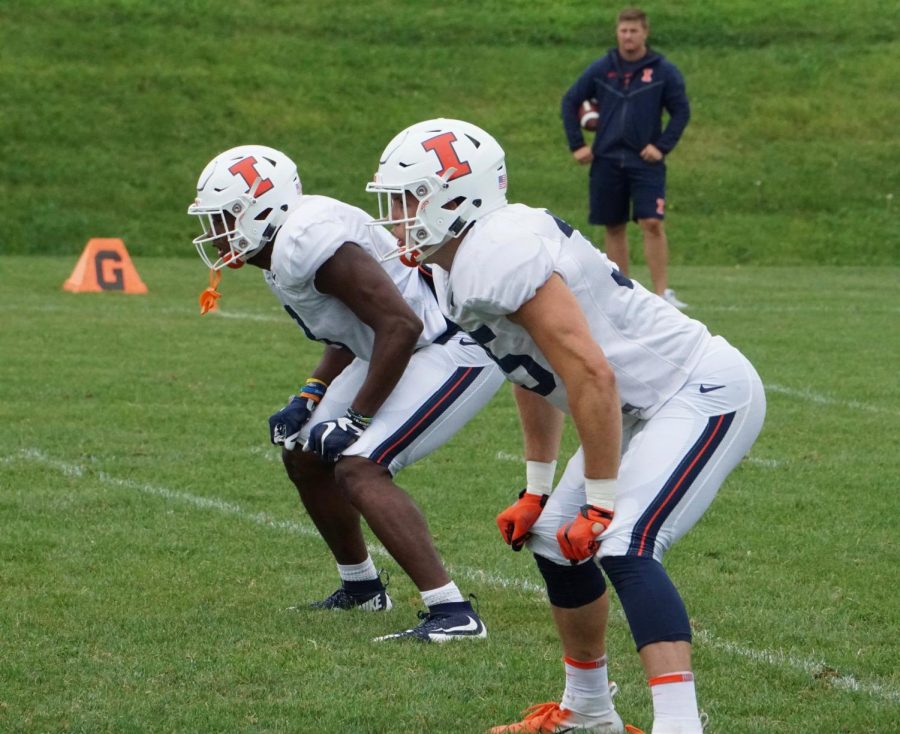 Linebackers Jake Hansen (right) and Del’Shawn Phillips (left) line up on defense at Illinois football training camp on Wednesday. Phillips and Hansen will take on a larger workload this upcoming season as the team is low on players at the position.

Illinois head coach Lovie Smith and defensive coordinator Hardy Nickerson speak openly about what they want from their defense: takeaways.

For a 2017 season in which the Illini sputtered to a 2-10 (0-9 Big Ten Conference) record, the defense actually fared respectably in the takeaway category, tying for 60th in the Division I Football Bowl Subdivision with 19 takeaways. But all too often, opposing teams were able to wear down the defense — especially as the offense could only muster 174 first downs on the season (No. 125 of 129 FBS teams), and the program surrendered an average of 418.5 yards of offense per game (85th in FBS).

Now, Illinois is confident it is making improvements in all areas of the field ahead of the new season, closing the gap on Big Ten opponents who overwhelmed a young team in 2017. Though the staff has talked about progress being made, arguably no area on the defense needs a bigger increase in production than at the linebacker position.

With last year’s starters Tré Watson (Maryland) and Julian Jones (Georgia State) transferring, and with the staff moving sophomores Marc Mondesir and Ayo Shogbonyo to the defensive line, Illinois hopes it has the quality at the position to compete.

On paper, that quality comes from returning starter Del’Shawn Phillips, who led Illinois with 85 tackles (46 solo) and is the only senior on the defense. It also comes with the return of now-healthy redshirt-sophomore Jake Hansen, who missed all of last year with a knee injury he suffered in camp.

“Jake fits the profile of what we play with linebacker-wise,” Lovie said. “Athletic, can play in space, smart and a playmaker. That year off allowed him to become more of a student of the game, too. Like where he is, hasn’t had any issues injury-wise.”

For his part, Phillips is making sure he and his guys have the schemes and reads locked down so they can focus on what’s important — making big plays.

“Things are going great, could definitely be better, (but) there’s always room for improvement,” Phillips said. “But for the most part, things are going great. Guys flying around to the ball, learning their responsibilities, reading their keys, executing their technique and finishing.”

Keeping pace with offensive coordinator Rod Smith’s much faster offense has been a difficult task, Phillips said. However, he believes it’s excellent preparation for some of what the defense will see during the season.

The offense’s increased speed makes it more difficult on newcomers such as Khalan Tolson and Jacob Hollins, who are working to learn their places in the defense but have to connect it all and get set more quickly in between plays.

“It’s exhausting, actually,” Phillips said. “A lot of reps, a lot of moving, a lot of running, play after play. They’re lining up the snap for the next play and we’re trying to get the call in still, get set up. It’s something to get used to; it’ll actually help us in the long run. We’ll be better conditioned moving forward playing against Big Ten teams.”

Nickerson is pleased with how his guys are coming along so far in camp but knows there is a lot of work to be done before the unit lines up against Kent State on Sept. 1. For the third-year coach, making sure his guys are ready ahead of each play has been a focus.

“The thing that’s most important for us is communication, everybody being on the same page,” Nickerson said. “Especially when things are going really fast, it can be a little hectic at times.”

The Illini will most likely have to rely on junior Dele Harding more this season, who started five games last season at linebacker and finished sixth in team tackles (32). Nickerson likes Harding’s experience, but can also use sophomore James Knight, who played in every game of 2017 on that strong side when Illinois opts not to use a nickel back.

St. Petersburg, Florida, native Tolson has also seen a lot of reps so far in camp. Rated as the No. 55 (247Sports) and No. 83 (ESPN) outside linebacker in the class of 2018, Tolson looks to have the athleticism of a Big Ten linebacker. He almost certainly won’t start, but will probably see time on the field, especially if injuries test the Illini’s depth.

Collectively, Nickerson, Phillips and Hansen like how the unit is progressing, but each acknowledged there is a lot of work to be done still.

“I think we’re coming together,” Hansen said. “Obviously, there is stuff you’ve got to work on every day and get better at, like just little details. As a whole, I think we’re starting to really mesh as a unit for sure.”