New Illini QB Bush: ‘I know where I’m supposed to be’ 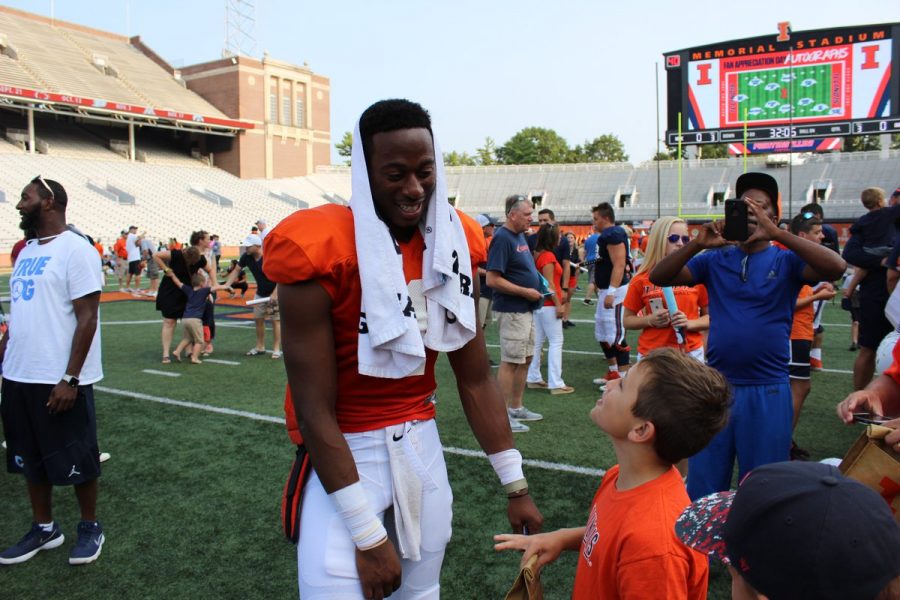 Grad-transfer quarterback AJ Bush meets with fan’s after the final Illini football training camp practice was held at Memorial Stadium on August 18, 2018. Bush has been a standout during training camp and is expected to be named the team’s starting QB for the season. Photo by: Eli Schuster

Illinois grad transfer quarterback AJ Bush has made himself at home in Champaign.

An unlikely journey spanning four schools in five years has humbled the Alpharetta, Georgia, native, but Bush feels like it’s his time now.

Since joining Illinois at the inception of training camp in August, Bush has shown an ability to connect with receivers and an athleticism that can make an offense multi-dimensional. The 6-foot-4-inch, 225-pound player likes to go on the run when he can’t find a receiver downfield, and his decision making has been a level above the likes of sophomore Cam Thomas and the freshmen trio of Matt Robinson, M.J. Rivers and Coran Taylor.

Though head coach Lovie Smith has not officially declared Bush the starter, all signs are pointing to Bush being under center when Sept. 1 comes and the Illini square off against Kent State.

“The last week or so, (Bush has) really kind of taken control of the team, something the staff wants from its No. 1 quarterback,” Smith said after Saturday’s final training camp practice.

After stops at Nebraska, Iowa Western Community College and Virginia Tech, Bush came to Illinois to finally be the guy at a Power Five school. He’s only completed seven passes at the Division I level, but Bush doesn’t carry himself like that.

“I never lack confidence, no matter what I went through in my career,” Bush said. “I know where I’m supposed to be, I know how good I am. I know what kind of player, leader and teammate I am, so why not be confident?”

His path has forced him to become stronger mentally, especially as he went through multiple quarterback competitions and never came out on top. Those experiences have helped significantly in Champaign, as Bush has gradually won over the coaching staff and the majority of the first team reps.

Whether it’s a big play, giving direction to other players or simply keeping it loose during downtime in between drills, Bush feels like this is his team. He regularly gets in the faces of his teammates to motivate them, congratulate them and to talk smack.

The offseason approach was different for Bush than it was for most college football players because he wasn’t eligible to practice with the team until camp began. He focused on doing what he could, working individual receivers on their own time and mining the lessons learned from past camps.

Bush’s collegiate years have taught him a lot about not only the game of football but how life works.

“I’ve learned a lot of things on the way,” Bush said. “Just learning what not to do, how to approach things, what to listen to when I’m in meetings. If you play Madden or a video game over and over, you’re going to lose a couple times, but eventually, you’re going to get better. That’s the thing I don’t think people realize; just because someone doesn’t have success early in their career or early in what they try to do, a lot of people miss what’s inside of that person. That’s one of the things you can’t judge, the desire inside somebody.”

That’s why Bush wants to be judged on his contributions to this Illini team and not by his resume, something that would be considered less-than-stellar for most Big Ten schools looking to identify a starting quarterback.

After a 2-10 season that saw Illinois come in as the No. 126 rated offense in the country, Bush is an option the staff feels will massively boost the team’s prospects. Confidence looms as the team shifts into new offensive coordinator Rod Smith’s fast-moving offense.

With a new offense to learn, surrounded by a sea of unfamiliar faces turned teammates, time is not on Bush and the Illini’s side. Little margin for error exists at this point, so Bush is making sure he’s a guy everyone knows and can approach. He wants to be a leader on the field and in the locker room, and has wasted no time getting to know everybody.

“That’s just my personality, man, I like to meet new people,” Bush said. “Everybody can be friendly with everybody, it’s just that comfort zone. I like to get people out of their comfort zone. I’m an outgoing person. If you’re a type that’s quiet, I’m going to talk to you just to see where your head’s at.”

In football and life, Bush applies the same philosophy. The setbacks will come, but it’s about getting past them. He hopes that will carry over well into this year at Illinois.

“It all comes down to your character and what you want,” Bush said. “If you want to do this, you’re going to capitalize on those lessons. I never lost, I took lessons and I learned from them. I always say, ‘two L’s make a W’. You’ve got to just keep grinding and focus on what you want in life.”