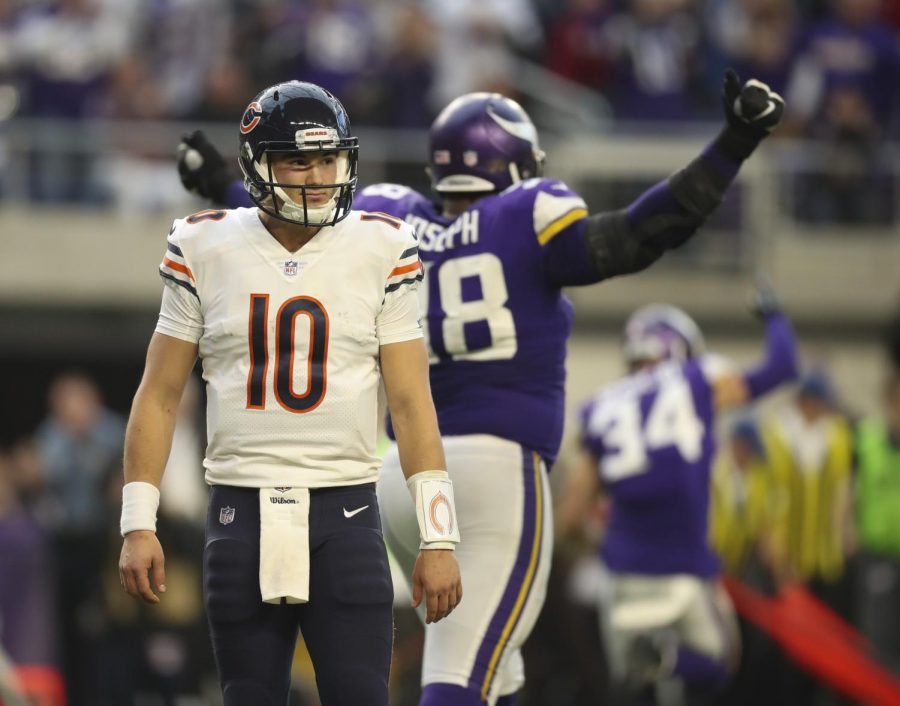 Quarterback Mitch Trubisky of the Chicago Bears competes in a game against the Minnesota Vikings in 2017. Trubisky is a young NFL talent that, much like the Illini football team, looks for big improvement.

Soon enough, our noses will be tickled with the sweet smell of pigskin in the morning. Saturdays and Sundays will be loaded with greasy snacks, minimal movement and plenty of mixed emotions. With all of this at the center of my mind, I decided to write a column full of wild accusations to connect both the professional and college football world. Like many of us, I’ve thought plenty of times about how the personality of an NFL quarterback compares to the play of an entire Big Ten team. You know, standard thought. Let’s get into it.

The Buckeyes are a quick-moving team that year after year rides the coattails of a breakout player who heads to the draft. Then, the QB holds down the fort for his college years. In this case, Prescott is literally riding the wave of former Ohio State player Eziekel Elliot. When it comes down to it, Prescott is good enough to run his team. He can go on the run if need be and then sling it down the field, one or two times, accurately during the game for a massive score. Prescott has what it takes to lead a team into the playoffs, but when push comes to shove and it’s all up to him, he just can’t get the job done.

The potential to put together a winning team has been present for the Golden Gophers for quite some time. As they try to figure out the P.J. Fleck era, the team continues to rely on players they hope to be diamonds in the rough. Matt Cassel is the human embodiments of the phrase “one of these days.” In college, the man had a total of 20 completions for the USC Trojans as he sat behind the likes of Carson Palmer and Matt Leinart. Yet, NFL team’s looked his way for success and still do. Cassel has continued to fool NFL general managers in almost the same way that the Gophers have fooled their fans.

We have no idea what to expect with Nebraska this season. New head coach Scott Frost has left his undefeated (national champion?) UCF team to enter the Big Ten lifestyle. The team has an incredible amount of potential to surprise some people right off the bat, but it also may take some time to get things right. Lamar Jackson comes to the NFL with plenty of expectations, but fans are ready to wait for his on-field production.

The Hawkeyes are a team full of ups and downs. Each season fans aren’t surprised if Kirk Ferentz somehow pulls together nine wins. Often, the team just understands how to win football games. It may not be flashy, it may not be a blowout, but Iowa will string together win after win. Alex Smith has continued to be productive each season of his NFL career, with some standout performances along the way. Like Smith, Iowa can push its way into the postseason but once it gets there, it’ll be a sad show.

In the Hoosier state, it’s all basketball all the time. If the Hoosiers team needs some more help, the Idaho-native inches  6-foot-7 with a mean inside game. The scholarship offer from Gonzaga shouldn’t go unnoticed.

Currently, plenty of controversies revolve around the Maryland Terrapins athletic program. For the past couple of years, people have expected the team to take a step in the right direction and finally, after last season it looked like it was going to happen. However, just like Winston’s 2016 season, the progress was interrupted by continuous off -the -field problems. Not to mention, both Winston and Maryland are well known for their crab legs.

The Boilermakers have some good players; however, not one of them will surprise you. How the team is going to perform really depends on the schedule it is dealt, but Jeff Brohm knows he can put together plenty of watchable performances. Nick Foles is almost the ideal backup quarterback. If he is dealt the right cards, can put together one heck of a fun game.

I feel like part of this is because he wore purple last season, but I stand by the comparison. Keenum came into the league with no one watching. He bounced back and forth from the Texans and Rams before finally finding himself some success with the Vikings. It took Northwestern quite a while to find their place in the Big Ten, but Pat Fitzgerald has finally made something work. Keenum makes the fans happy but brings the harsh realization that a realistic championship run will always be just out of reach.

The Nittany Lion put up big numbers with plenty of highlight reel plays. The team can dominate the regular season, picking up wins over big opponents. Although, when the lights shine bright the moment becomes too big. Matt Ryan wins you plenty of ball games and can even put together an MVP season, but hoisting the final trophy is no easy task for him.

Michigan State always finds themselves a relatively productive quarterback. He can sit in the pocket and make the necessary plays. In some cases, the quarterback can even lead the team in clutch moments. Overall, the Spartans fit with Kurt Cousins, both being consistent and productive.

Ryan Tannehill has plenty of physical talent and a lot of upsides. Although, injuries have plagued his career and once again he is trying to bounce back. Each season leading up to his ACL injury in 2017, everyone expected Tannehill and the Miami Dolphins to take that next step. In recent Wolverine history, expectations have been high going into the next season but Jim Harbaugh just hasn’t been able to turn things around. The roster is full of talent, but getting the most out of it has been a real problem.

Wisconsin is boring. I respect everything about what Paul Cryst has created, but when the Badgers play I’m definitely not running to the TV to tune in. The team is methodical, slow-paced and simple. Say what you will about Blake Bortles, but the man has, so far, made a name for himself in the NFL. He isn’t very exciting and he also isn’t your number one choice. Although, he is a relatively safe bet and you know what you’re going to get.

Mind my metaphor, but Trubisky is a young flower that just hasn’t sprouted. The Illini are in the midst of a huge rebuild and the team is relying on young players to learn the game. Trubisky has potential to grow each year but has a lot to improve on. It may take some time to get things right, but if all goes according to plan the making of a strong, reliable QB could be in the works. Trubisky is an experiment as is the Lovie Smith-built Illini (and the coach’s facial hair).

Correction note: The name “Kurt Cousins” originally appeared in the column incorrectly and has been changed to “Kirk Cousins.” The Daily Illini regrets the error.