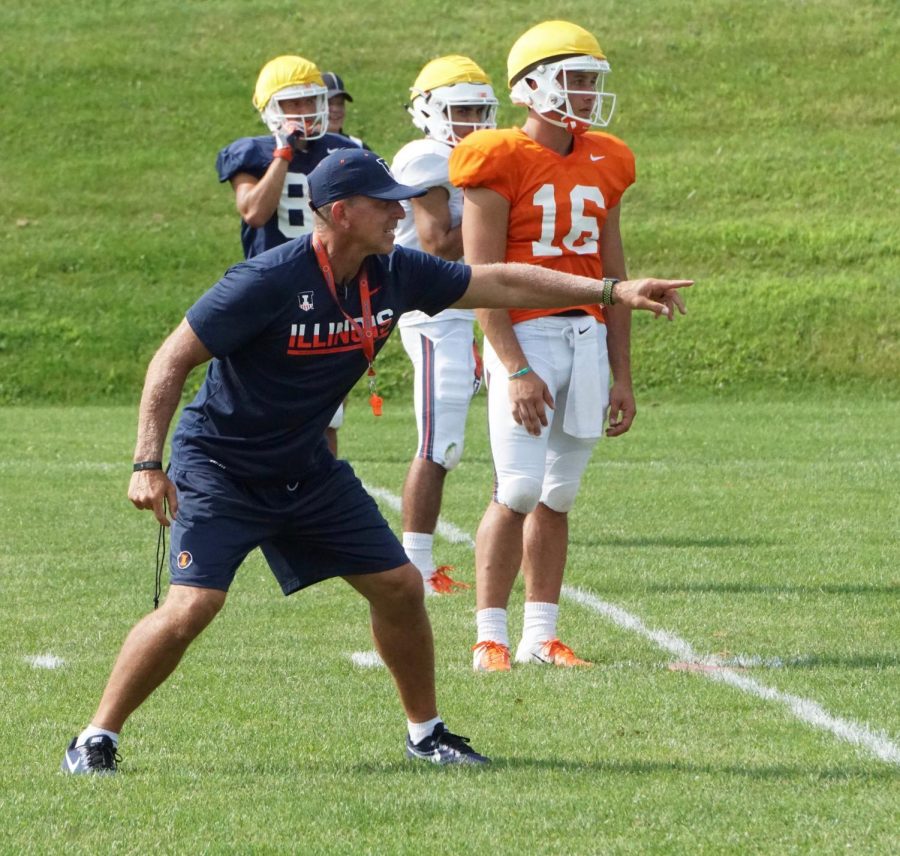 Special team coach Bob Ligashesky directs Illini players during training camp. Ligashesky coached one of the best units in the 2017 season and looks to expand on its production. Photo by: Gavin Good

Illinois didn’t have many positives in Lovie Smith’s second season in charge.

The team was not competitive in the Big Ten (0-9), as a raw group of freshmen was overwhelmed by bigger, stronger and older talent. Adding to that, there was a mass exodus of transfers to close out the year.

But Illinois can take some solace in having been rated No. 38 in special teams efficiency.

Third-year special teams coordinator Bob Ligashesky wants to build on that, though. He came to the Illini with over a decade of NFL coaching experience and wants the special teams unit to impact the team positively in all aspects — kicking, kickoffs, punting, returning and return coverage.

Throughout training camp, he mixed and matched personnel at a variety of different alignments and roles in kickoff and punt coverage. It’s normal to hear his booming voice while on the opposite side of an Illinois practice. He’s got to get his message heard, especially when players are balancing their roles with different ones on offense or defense.

“The thing we’ve talked about is, in coverages, we have a chance to control the coverage,” Ligashesky said. “We’re always trying to improve that, we’re saying, like, ‘Hey, what’s the best thing our specialists do, and then, what’s the best way to cover that?’”

The punting game is one area where Illinois has been strong in the past. Built on the back of sophomore Australian Blake Hayes, who averaged 42 yards per punt as a freshman, Illinois pinned opponents back inside their own 20-yard line 22 times in 2017.

The All-Big Ten honorable mention started every game and ranked third in Big Ten punting average (42.7 yards per punt). In the offseason, Hayes has mostly worked on solidifying his fundamental techniques, mastering the end-over-end, Aussie punt style, in addition to developing some other finesse styles of punting.

“He’s focused on what he’s doing and just wants to be a really good player and do everything he can to help the football team,” Ligashesky said. “Be a great teammate, work hard. I like that he focuses on his job every day and comes out to work hard.”

Hayes adjusted quickly to life in Champaign but feels even more comfortable headed into the fall with a full year under his belt as an Illini. When he first told his parents about his dream to punt in college for an American football team, they weren’t very fond of the idea.

But Hayes quickly showed them why they should believe.

“They didn’t support me initially just because it’s such an out-of-the-box idea,” Hayes said. “As we started to realize it was a real opportunity, their support came on board and they supported me all the way. That was really important.”

Last year, his parents visited late in the season, but they’re set to surprise their son with a three-game visit in 2018. He thinks they’ll choose a block of games in the earlier part of the season to avoid the often-cold, sometimes dreary November games. He speaks with them every day, and though he has built on-campus relations, they remain a big part of his support system.

“It’s awesome for them to come out here and see all the work we’ve been doing, me personally and as a team,” Hayes said. “They love it because, people like Dudek and things, they class as celebrities, like A-list celebrities in their eyes. They get mesmerized when they see them.”

Watching returners struggle to field Hayes’ punts has become a common sight, which may be due in large part to the punter’s ability to cause the ball to move in the air. He’s taken joy in pinning opposing teams deep, making their trek toward Illinois’ end zone tougher.

“I think it’s because I’ve been doing it since I could really walk, so it’s just natural,” Hayes said. “I don’t have to think about anything really. The spiral kick, I’m still developing, but the Australian kick, the technique’s always been there.”

Illinois feels pretty good about its other specialists too.

Senior kicker Chase McLaughlin is returning after going 12-for-17 on field goal attempts and not missing a single PAT on 17 attempts in 2017. He was also a perfect 9-for-9 from under 40 yards.

However, McLaughlin is in an odd situation for a kicker without major struggles and two years of starting experience. He’s got sophomore James McCourt and recently arrived freshman Caleb Griffin behind him, two capable legs that Illinois is using scholarship space on (though Griffin is a blueshirt because Illinois didn’t have enough available scholarships left for the 2018 class).

That’s rare, but McLaughlin is enjoying working with and against the two younger kickers rather than fretting about either threatening his spot.

“They put a lot of pressure on me to be as good as I can,” McLaughlin said. “I know that they’re kicking outstanding, and to keep my spot, I’m going to have to kick better than them. That’s the bottom line. If you want to keep your job, you have to be the best. It’s definitely different, but I wouldn’t trade it because it keeps me on my toes and performing at the highest level.”

With his 2017 field goal long standing at 43 yards and missing five of his eight attempts from beyond 40 yards out, McLaughlin wants to shore up that area of his game. But he’s not overthinking it. The kicker made one from 68 yards out at Ohio State last year during warm-ups, and he believes in his leg strength.

“I just think I’ve been hitting the ball well lately,” McLaughlin said. “For me, it’s all about contact, the way your foot hits the ball. I’ve been focusing on that, doing a lot of little drills, contact drills to keep that finely tuned and where I want it. It’s been helping me a lot in this camp and hopefully into the season as well.”

For his part, Ligashesky has been fairly vague about endorsing a starter ahead of the beginning of the year. Currently, he’s relishing having three guys at the position and is giving the trio a variety of reps and kicking situations.

“They’re all still competing, knowing each other, pushing each other,” Ligashesky said. “We’re just trying to give everybody a chance to show and make sure we can put guys in situations that they’re good at. Some guys might be better at one thing than the other, and if we can use those skills to help us, there’s no problem in using them.”

McCourt and Griffin have each shown strong legs in practice so far, though McLaughlin has had the larger share of the most meaningful reps. McCourt seems to have added some strength over the offseason but tends to be less accurate.

McLaughlin sees sharing reps in camp and practicing with his two younger counterparts as a major positive for the group as a whole. Everyone gets to do everything and no one wears their body down too much.

“Biggest thing I think is, is it’s not like other positions, where you can go and knock your head into the wall and kick and kick and kick,” McLaughlin said. “You’re going to throw your leg out and just be done halfway through camp. With (Coach) Lig, he understands that and he gives us time to recover and time to rotate kickers every day. One day, I can be focusing on smaller drills and not be throwing out my leg. The next day, I can be kicking and have a smaller amount of kicks but have them be more in pressure situations like kicking in front of the whole team.”

McLaughlin characterizes his coach as many do — loud, intense, intimidating. But in the end, he wouldn’t have it any other way.

“He’s real hard on you,” McLaughlin said. “He’ll tell us straight to our face, which is one of the best things I love about him. It’s harder kicking in front of him, with him breathing down your neck and yelling at you, than it is in a game. That’s the whole point of it, making practice harder than a game, so when you get in the game, it feels easy.”