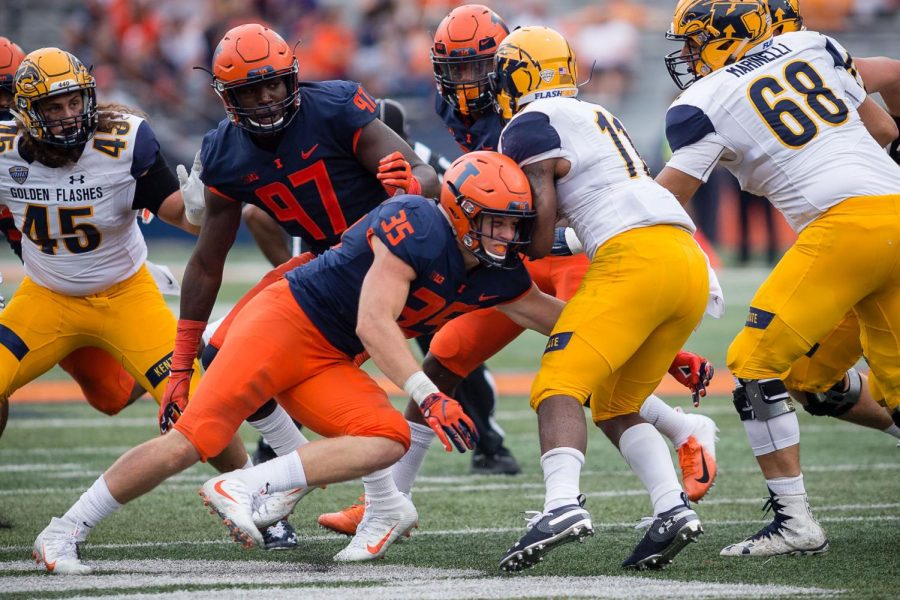 Illinois linebacker Jake Hansen (35) makes a tackle during the game against Kent State at Memorial Stadium on Saturday, Sept. 1, 2018.

Jake Hansen was all over the field for the Illinois defense in Saturday’s comeback win over Kent State.

The sophomore tied Jeff Weisse’s 1998 program record with six tackles for loss in his first game back since suffering a torn ACL during training camp last season. Hansen also led the Illini with ten solo tackles, assisting on five.

“I’ll tell you what, I was pretty nervous going into the game,” Hansen said. “Hadn’t played in a while, so it gives me a little confidence in myself, my abilities.”

While he was generally unhappy with the performance on the field, head coach Lovie Smith was pleased to finally see Hansen, a player he’s praised a lot in his time at Illinois, step up in a game. With Hansen’s ability to make reads on plays and his consistency in open-field tackling, the Illini benefitted significantly from his return.

“Jake’s a good football player, start with that,” Smith said. “He can do everything we ask in our linebackers, he fits the profile. He can play in space, he’s a good tackler in the open field. He dropped a ball today, but he has good hands. He gets the coverage part, a football junkie.”

If Hansen can stay healthy and keep making plays like he did on Saturday, the linebacking corps will be much more disruptive than it was in 2017, when Illinois, as a unit, was ranked No. 85 in total defense.

Grad transfer quarterback AJ Bush connected with five different targets on Saturday. While Illinois will want to get even more players involved in the passing game, the receivers showed some promise.

Sophomore Ricky Smalling made three catches for 70 yards, including a 44-yard reception where he made multiple defenders miss before being brought down. After a freshman campaign in which he led the team with 31 receptions for 501 yards and two touchdowns, Smalling got open and made himself a target for his new quarterback.

Seniors Mike Dudek and Sam Mays also added to the Illini’s offensive efforts, bringing in three receptions each. Dudek averaged 13.7 yards per catch, totaling 41 yards, while Mays had his first catches in over a year after playing last season, but failing to make a catch.

“Sam has been healthy and he had a good training camp,” Smith said. “His problem has been more staying on the field, fighting through injuries. Beyond that, he’s a good matchup in one-on-one situations, good size. He’ll tell you there’s a couple opportunities we left out there too that we’ll get next time, but I like what Sam has done.”

Bush totaled 156 yards in the air, completing 11 passes on 20 attempts and earning a quarterback rating of 120.5 on the day. He also added 139 yards on the ground, the fifth-most for a quarterback in program history.

Suspensions loom large, even in wake of victory

That means the team will be without some of its biggest producers last season in Williams, Hobbs and Dorsey. As for Green and Pate, the two were top-young talents looking to make a difference this season. No timetable was given for their return, and Smith refused to comment any further during the postgame press conference.

The suspension of Williams meant Illinois relied more on freshmen Delano Ware and Kerby Joseph to fill in, though the secondary struggled to make tackles throughout the game. Illinois started freshman Daniel Barker to replace Dorsey, though he had a relatively quiet game.

Smith wouldn’t provide any details of why or what the suspensions are from, and Illinois lacks the depth needed to seamlessly replace the talent of the players currently suspended, especially with the health of starting corner Tony Adams in question as well.

If one compares the Illinois offense on Saturday to the 2017 unit, it would get an A for sure, but the Illini showed flaws against a Kent State team they should have taken care of more comfortably. The offensive line allowed three sacks against what is predicted to be the worst team in the MAC, despite coming into the game at full strength. Receivers dropped some catchable passes — a wide-open Sam Mays dropped what could’ve been a touchdown had he beat the defensive back after hauling it in. However, the running backs did average 5.2 yards per carry, something the staff will be happy with, and Reggie Corbin outgained his entire 2017 season by putting up 79 yards on 10 attempts (he rushed for 78 on 18 carries last year).

The defense was the more disappointing side of the ball for Illinois on Saturday, conceding 453 yards to what was 2017’s third-worst FBS offense (No. 127, Illinois was No. 126). Quarterback Woody Barrett seemed to have the Illini’s number, completing 28 of 41 passes for 270 yards and two touchdowns. Barrett also gained 129 yards on the ground, including a scramble of 23 yards and added a touchdown. Sure, key players were suspended, and sure, other players stepped up, but Illinois should be concerned with the constant missed tackles and several moments where coverages were blown. Stronger opponents will carve this unit up if it can’t shore things up.

At times, AJ Bush’s decision making was questionable, and even a bit slow. It showed twice in the second quarter, once when he stared down Smalling a couple seconds before throwing to him, allowing a Kent State defender to close the gap and break up the pass. A bit before that, he was rolling out of the pocket, toward the sideline, and threw behind Smalling as he was crossing back into the middle. Bush did more than any Illinois quarterback has in a while — he consistently completed passes, and he was productive on the ground (139 yards rushing). There will continue to be a learning curve, especially with a player like Bush who was making his first college start, but he showed promise.