Mike Dudek out for season 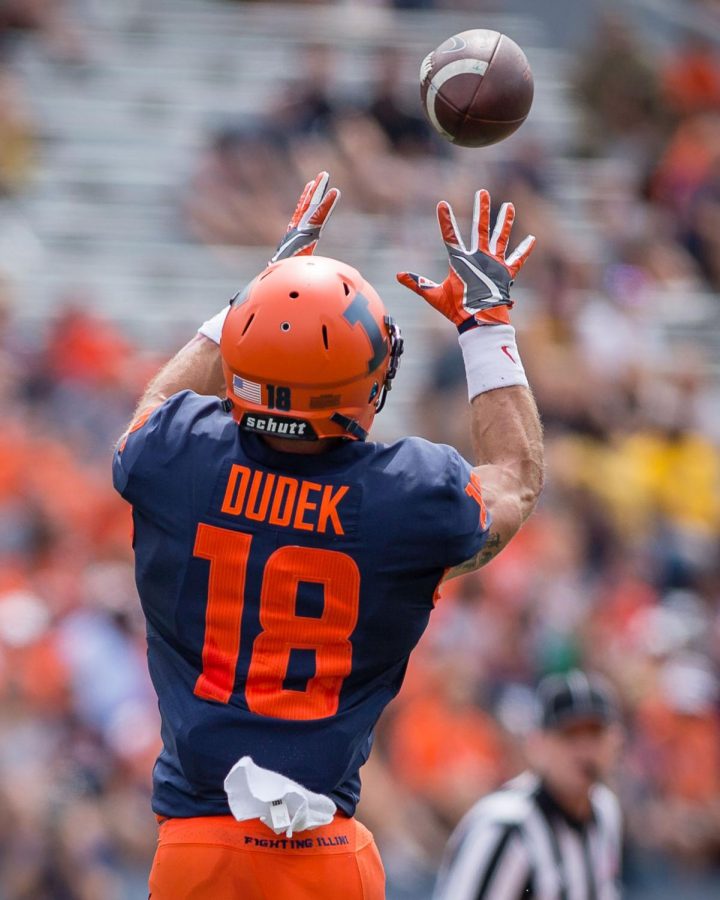 Illinois wide receiver Mike Dudek (18) leaps up to make a catch during the game against Kent State at Memorial Stadium on Saturday, Sept. 1, 2018.

Dudek missed all of the 2015 and 2016 seasons with ACL injuries, and also missed five game last season due to lingering injuries.

Widely considered one of the integral leaders for the Illini, Smith speculated that Dudek suffered the injury late in the game, Saturday, against Kent State, where he had four catches for 65 yards.

BREAKING: Mike Dudek out for the season with another knee injury. Lovie: "Some things are hard to understand, that's definitely one of them." #Illini

According to Smith, players didn’t hear about the news prior to his announcement at the press conference.

“To be truthful, most of our guys don’t really know about it (yet),” Smith said. “We just found out earlier, I know how they will feel. There’s a reason why Mike is popular, he does everything right.”

Players in attendance at today's press conference have had a hard time processing the Dudek news. Informaiton broke to the players the same time as media. #Illini

Dudek’s 2014 freshman campaign was one the most successful in recent school history. He ended the season with 1,038 receiving yards, breaking the Illinois freshman record, while catching six touchdowns, tying the program’s top mark for a freshman.

He also received praise nationally, as he was named Second-team All-Big Ten, and a True-Freshman All-American by ESPN.com, 247 sports and Scout.com.

Before he could take the field for his sophomore campaign, Dudek suffered a torn ACL during spring practice in 2015 and would suffer another ACL injury in the same knee that caused him to miss the 2016 season.

2017 was expected to be a much-anticipated return to health for the then-redshirt junior, but he ended up missing five games with other lingering health issues, only totaling 262 yards and one touchdown in seven games.

Dudek was expected to be in the best health since his freshman season and during the offseason received plenty of praise from new offensive coordinator Rod Smith. During training camp, Smith worked to get Dudek heavily involved in his offensive scheme this season.

Smith lamented Dudek’s bad luck with injuries, given how hard he worked to get back on the field.

“I hate it, man,” Smith said. “It’s sad cause I watched that kid pour his heart and soul into workouts and getting back. My heart goes out to him and his family.”