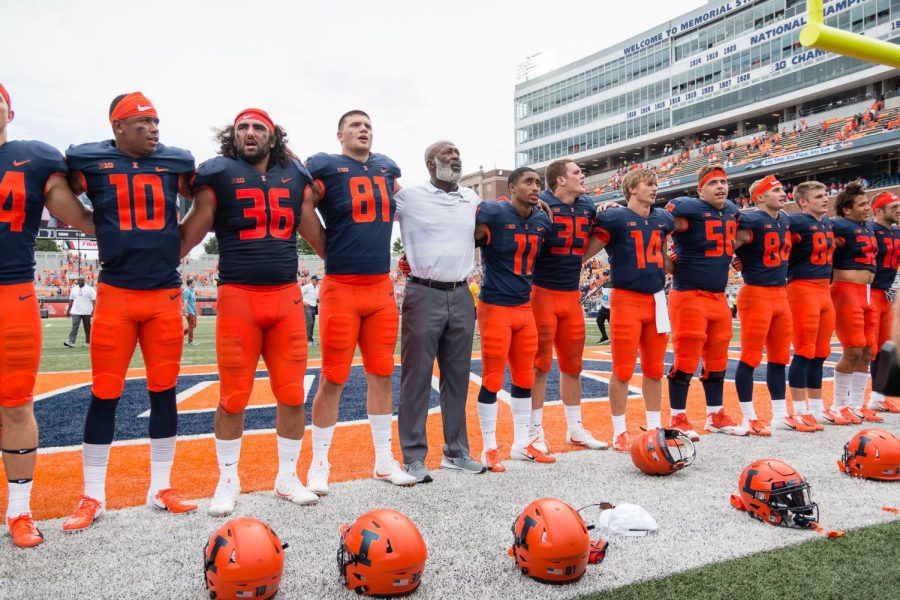 Illinois head coach Lovie Smith sings Hail to the Orange with his team after the game against Kent State at Memorial Stadium on Saturday, Sept. 1, 2018.

At the Illinois season opener on Saturday, boos rang throughout Memorial Stadium.

As I sat behind the thick glass of the press box overlooking the roughly 31,000 fans who decided to make their way into the stadium, I could hear the sound of muffled yet booming boos.

The first half of Illinois’ battle against Kent State was one to be forgotten. In fact, a ceremonial burning of the game tape may be the appropriate next step.

While I have encountered brief booing before from the Illinois fans, this experience felt different. Instead of being rooted in dissatisfaction or poor play-calling, this one left the mouth with a taste of betrayal.

During the preseason, and especially training camp, optimism continued to grow around the football program. Not only was recruiting looking up for the class of 2019, but Illinois was going to have a legitimate quarterback battle. Not to mention, the team would finally get back some healthy key players.

Grad-transfer AJ Bush arrived on campus and almost immediately put his name at the top of the depth chart.

Illinois had its quarterback.

Rod Smith ran an offensive scheme that fit the college play style: A spread offense that relied on getting its top playmakers the ball in space. The new approach, on full display during training camp, was discussed by staff and media alike as refreshing.

Illinois had its offense.

Jake Hansen was returning to action. Young players were showing that the experience last year helped. Freshmen were making plays.

Illinois had its team.

All of this isn’t to say that picking up more than four wins to start the season still wasn’t a stretch. Illinois had, and still does have, plenty of question marks surrounding the team. But the idea of doubling the team’s win total after a brutal 2-10 season felt like a doable victory within itself.

Fans just want to see progress, but during Saturday’s first half, they saw anything but.

After senior Chase McLaughlin missed a 56-yarder to send the Illini into the locker room behind 17-3, fans let the frustration out, and it didn’t go unnoticed.

During the postgame, Lovie Smith addressed the crowd’s reaction in the best way possible, agreeing with it.

“I was part of the same group,” Smith said. “That performance that we put out there (in) the first half, relatives and family were okay, but beyond that, no, we didn’t play well.”

Typically, being booed during a season opener would be seen as a negative, but in this case, I believe it helped flip the script. The Illini outscored Kent State 28-7 in the second half, giving fans a closer look at what everyone had been talking about in the preceding weeks.

The team’s ability to shake off a halftime deficit was an oddity. The last time Illinois won a game after being down at the half was Oct. 3, 2015, against Nebraska. I stood in the rain that night as I watched former Illini and current Green Bay Packer Geronimo Allison catch a game-winning touchdown.

The same cheers that rang through the stadium that fall night filled the air on Saturday. It has been four years since Illinois fans got to see a halftime deficit overcome, and the four years-worth frustration that has been built because of it was heard through the chorus of boos.

The first half of Saturday’s game could have marked an end for the Illini. The end of utter frustration. The end of boos.

The second half of the game felt like the Illini finally broke down a barricade. The hurdle of losses and unwatchable football may have finally been overcome with the bounce-back performance.

Although, I could be completely wrong come game time next week. If so, feel free to send the boos my way.