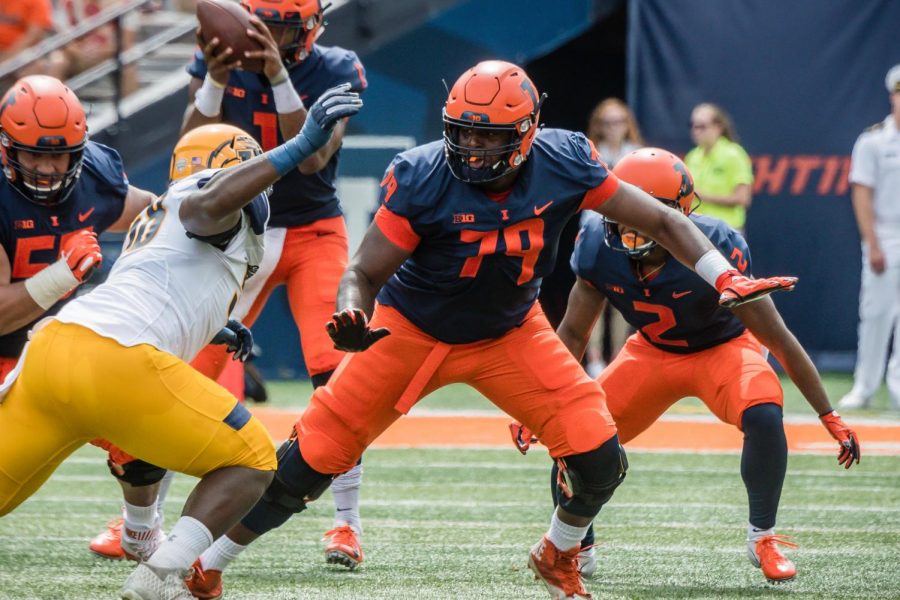 Offensive lineman Vederian Lowe prepares for a block against Kent State last Saturday. Despite a rst-half struggle, with several missed blocks and a lack of communication, Lowe and his fellow linemen made halftime adjustments to help lead Illinois to a 31-24 victory.

Illinois knows it needs to play better to have a successful season.

The team squeezed out a 31-24 win over Kent State in week 1, but it had to come on the back of a 21-point third quarter, the highest-scoring quarter for Illinois so far under  head  coach  Lovie  Smith’s guidance.

After struggling to move the ball in the first half, the Illini put up 301 total yards (of 469) in the second half, breaking out on four scoring drives to bridge what was a 17-3 halftime deficit.

At the half, linebackers Del’Shawn Phillips and Jake Hansen delivered motivational words. No position group was doing what it needed to for Illinois, and the offensive line was putting unwanted pressure on the defense.

“First half was just not good,” said tackle Alex Palczewski. “We needed to come out way harder; we need to impose our will and dominance on our opponents. That’s just not what we did.”

As offensive coordinator Rod Smith pointed out on Monday, the issue was a matter of not executing on assignments above all else. Once Illinois began to win the smaller battles on the field, the offense had an easier time marching down to score.

Sophomore Vederian Lowe made his eighth start as an Illini on Saturday and next to newly minted guard Kendrick Green, he didn’t play his best game. But as Lowe said, he and the rest of the line got the composure needed to give quarterback AJ Bush Jr. time to make plays.

Lowe thinks for his guys on the line, communicating efficiently and quickly was what helped make the difference in the second half.

“We were trying to make sure that everybody went to the right person and there were some people on different pages,” Lowe said. “Halftime, we got the guys together, listened to the coaches, listened to the game plans, their adjustments. We came out the second half and made everything right.”

Though Lowe and Palczewski have each started since last season, Green made his first start on the line on Saturday. Palczewski was proud of the 300-pound Peoria  Illinois native’s work — it went much smoother after halftime. He said he always knew Green would make the adjustment from the defensive line with relative ease.

“As soon as (the coaches) said he was going to come to O-line, I was very excited because he was always a hard worker,” Palczewski said. “Throughout the entire offseason, whenever we were running, I was always with him because he and I push each other and we did a lot of stuff together. He’s been doing a great job; he’s been making great strides. He’s going to be very good.”

Illinois put up 279 rushing yards, including 139 from Bush, and the holes were more evident in the second half. Palczewski wants to see Illinois take that next step on Saturday night against Western Illinois and control a game from start to finish, rather than having to play from behind.

“I just want to see (the offense) keep on going,” Palczewski said. “Our offense is all about tempo. No matter what happens, if we bust a 20-yard run or something, we just need to get back on the ball and run our next play. If you look at the second half, that is what really started clicking for us. We kept on moving the ball and we kept on going as fast as possible.”

For Lowe, making  improvements on the line so Illinois can maximize Bush’s time in the pocket and give its running backs as much room to roam as possible is a fairly simple matter. They just need to talk well, stay alert and execute the game plan.

“(We need to) stay on the same page, communicating, making sure we all go to our right assignments, be aggressive, use coach’s technique like he always talks about,” Lowe said.

Once the team gets rolling offensively, things will only continue to get easier, Lowe said. When that forward momentum is picking up, especially in the trenches of the line of scrimmage, the offensive line can feel it.

It happened against Kent State, and Lowe wants it to be an ever-present goal against Western Illinois.