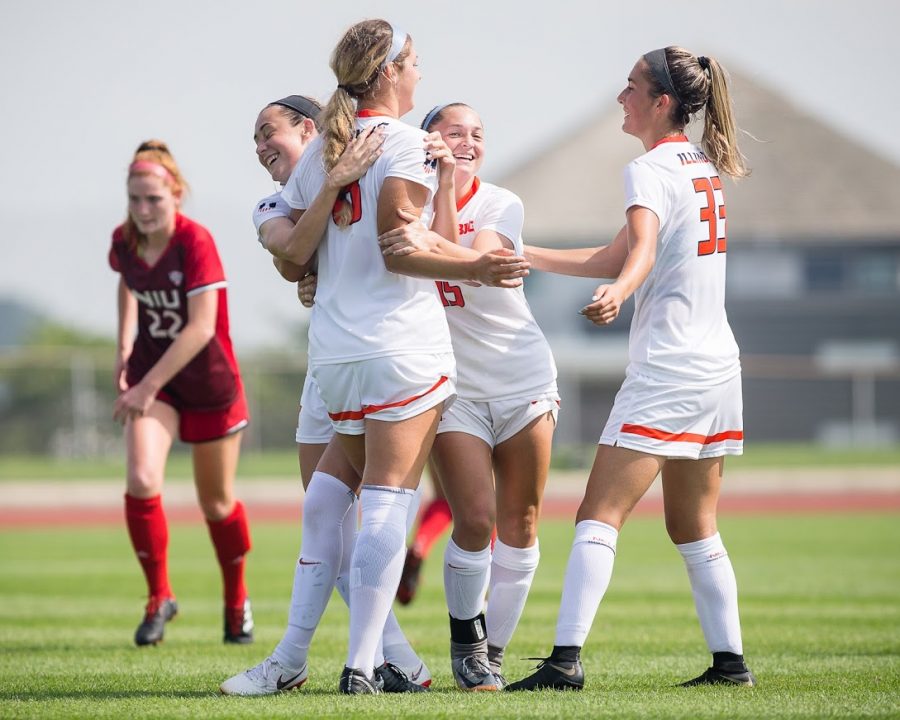 Illinois midfielder Hope Breslin (10), forward Kelly Maday (15), and defender Ashley Cathro (33) celebrate with forward Caroline Ratz (8) after a goal during the game against Northern Illinois at the Illinois Soccer Stadium on Sunday, Aug. 26, 2018. The Illini won 8-0.

Illinois soccer fans may not have seen it coming, but head coach Janet Rayfield’s squad is competing with some of the nation’s top talent.

On Monday, Rayfield addressed the media at Memorial Stadium before football head coach Lovie Smith’s weekly press conference. The Illinois soccer team has shown its close contest against No. 6 North Carolina and win over No. 3 Duke were not flukes.

The team is coming off a 5-14 season that left some questions about the future of the program, especially after a 2-9 performance in Big Ten play. It only took the Illini six games this season to pass up the total goals scored in last year’s campaign.

In the most recent contest against a ranked opponent, Illinois clashed with No. 14 Oklahoma State Friday and picked up its third victory of the season.

Much like its other battles against ranked opponents, it wouldn’t come easy as Oklahoma State’s Julia Lenhardt scored with just a second remaining in the first half. This was a rather large momentum swing.

Junior goalkeeper Jaelyn Cunningham emphasized the team’s self-confidence, which allowed it to forget about the end of the half and prepare for a comeback bid.

“At the end of the day, we all really believe in this team and each other,” Cunningham said.

The Illini would come out of the halftime break pushing for an equalizer and finally found one in the 65th minute. The Cowgirls failed to clear their lines off a cross from the right wing, leading to sophomore midfielder Hope Breslin baiting her defender to the right before quickly darting back left and heading the ball in.

With just five minutes remaining, senior midfielder Katie Murray was taken down in the box and the ball spilled ever so slightly away from her feet. While the referee did not give a penalty, junior midfielder Arianna Veland pounced on the loose ball and hit a powerful shot into the top right corner to seal the win.

Veland decided to keep playing until she heard a whistle, which only came to signal the goal after she put the ball in the back of the net.

“I saw Katie go down and I knew the ref wasn’t going to call it, so I just went for it,” Veland said. “I’m glad that it went in.”

Friday’s game was certainly intense, and the Illini rode the momentum from the upset victory to a lopsided victory over SIU-Edwardsville.

Freshman forward Makena Silber opened the scoring just 33 seconds into the match, and the attack continued to flow after that. Murray added two goals to her team-leading total of four, and upperclassmen forwards Caroline Ratz and Kelly Maday also scored on the way to a 5-0 victory.

Rayfield feels her team’s drastic increase in goal-scoring can be attributed to the players’ improved attitudes, as well as the addition of talented newcomers.

“People keep asking the question ‘why are we scoring goals?’” Rayfield said. “There are several things that contribute to that. We’ve got some freshmen coming in (and) making an impact. Certainly, Makena Silber makes a difference. I think you also see some maturity in our other players.”

The Illini have just one more nonconference game left; they will host Illinois State on Sunday. As Big Ten play looms, Rayfield is happy with the impact her team’s offensive exploits have had on the other parts of its game.

“Certainly excited with where we are right now,” Rayfield said. “I think the most exciting thing (is) that last year, scoring goals was a challenge for us, and certainly this year, that’s been a different story. That’s changed our confidence, the way we play and our results.”