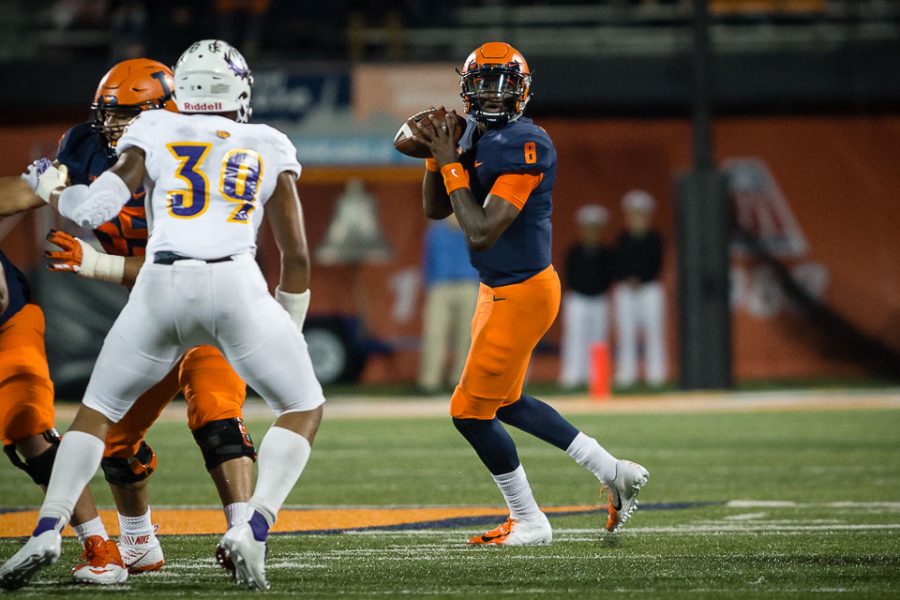 Illinois quarterback M.J. Rivers II (8) looks to pass during the game against Western Illinois at Memorial Stadium on Saturday, Sept. 8, 2018.

Rivers made an unexpected Illini debut after starter AJ Bush came out of the game with an injury at the end of the first quarter, but the Frisco, Texas native was composed when called upon.

Western opened the game with a six-play, 75-yard drive to take a 7-0 lead, and Illinois was unable to answer until Rivers took them downfield on a five-play, 45-yard drive.

To cap it, he hit fellow true freshman Edwin Carter for an 18-yard touchdown pass. Later in the second quarter, he did the same, hitting Carter in the end zone for a 16-yard touchdown. Carter made an acrobatic catch, but took a hard shot on the play, and came out of the game with a potentially serious knee injury.

Rivers’ emergence was the stable presence Illinois needed to overcome another slow start, completing 9 of 16 passes for 105 yards, and two touchdowns.

“(I) thought he showed a lot of poise,” Head Coach Lovie Smith said. “(Rivers) made the throws that he needed to.”

Smith said Rivers came on strong at the end of training camp, and that the staff felt most comfortable with him running the offense after Bush’s injury.

For Rivers, this was the moment he’d been preparing for since arriving on campus.

The Illini entered the half with a lead of 14-7, and was able to keep up that momentum for the remainder of the game. Kicker Chase McLaughlin tacked on two field goals, a personal best of 54 yards (tied for third-longest in school history), and another from 46 yards out early in the fourth quarter.

The offense put up 376 yards in total, including 238 yards on the ground, despite not running the ball once during the first quarter.

Mike Epstein busted off two big runs, one for 38 yards on a scoring drive in the second quarter, and another in the third quarter for another 38 yards. The sophomore only had eight carries, but put up 105 yards for an average of 13.1 per carry.

Junior Reggie Corbin went for 63 yards on 15 carries, getting into the end zone on a three-yard dash, capitalizing on sophomore walk-on Michael Marchese’s interception return early in the fourth quarter.

Sophomore Ra’Von Bonner had 22 yards on seven carries, and both Bush and Rivers had their scrambles as well, though neither put up a substantial amount of yardage in the rushing game.

With the balanced use of its rushers, Illinois has made it difficult for other teams to prepare, according to Epstein.

“Not only (is it harder) for their personnel to get ready for us, but just seeing three or four different backs on the field,” Epstein said.

Once the Illini broke off a couple of larger runs, gaps opened, and Epstein credited the offensive line with opening holes for himself and Corbin down the stretch.

“Our tempo is tough to stop,” Epstein said. “After a certain amount of plays I get pretty tired. I can’t even imagine the defense, because we’re rotating backs. I think it opens up some more of our lanes and really gives us an advantage.”

With the indefinite suspensions of starting defensive backs Bennett Williams and Nate Hobbs and the injury of corner Tony Adams, several walk-on’s saw meaningful time on Saturday night. Late in the game, walk-on defensive back Nolan Bernat intercepted a pass.

As for special teams, in the third quarter, sophomore defensive back Dawson DeGroot blocked a Western Illinois punt and safety Stanley Green scooped up the loose ball, returning it for a touchdown to boost the score to 17-7.

Smith was pleased with both his defensive and offensive lines after the game, after desiring more from each unit after the season opener against Kent State.

“Going into the game, the offensive line hadn’t played well,” Smith said. “The defensive line needed pressure, and I felt like both of them stepped up to the plate.”

Defensive linemen Bobby Roundtree, Isaiah Gay, and Jamal Woods each had sacks, and Illinois only gave up 66 yards on the ground, which had been a focus point for the unit after struggling against the run in 2017.

For Roundtree, performing better was a matter of simply picking the right moments to go for big plays, especially after the Leathernecks marched down the field to score on their opening drive.

“We knew what to look forward to,” Roundtree said. “We just had to be patient, and wait until our plays were called on us.”