Business as usual for Illini 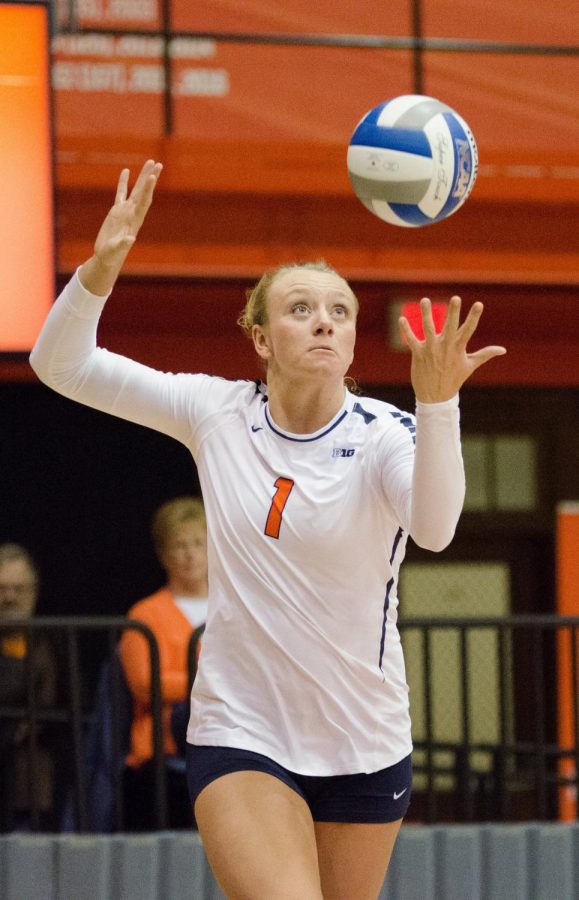 Jordyn Poulter begins her serve during Illinois’ game against Wisconsin on Nov. 17.

It’s been over a week since the Illinois volleyball team lost a set.

It’s been over half a year since it’s lost a game.

The Illini have started their season with eight wins (only losing five total sets), an NCAA ranking and several conference honorees. Senior Jordyn Poulter grabbed the team’s first weekly Big Ten honor last Tuesday when she was named co-Setter of the Week. Poulter averaged 12.14 assists per set at the Big Ten/Pac-12 Challenge in Seattle.

After a season that included a trip to the Sweet 16, head coach Chris Tamas accredits the team’s consistent 2018 start to merely getting back to business.

“It helped having the lineup back in order,” Tamas said. “With Beth (Prince) back on the outside and Megan (Cooney) on the right, I thought the team played exceptionally well as a team, which is a big deal to me.”

And it takes playing well as a team to perform the way Illinois has against top-25 teams. The team has already defeated three ranked opponents — No. 25 Colorado State, No. 21 Colorado and No. 13 Washington — before a weekend battle with Cleveland and Cleveland State.

Having a promising start can often make a team feel like they have a target on their back — something the Illini are no strangers to at this point in the program’s history. But sophomore defensive specialist Morgan O’Brien knows the secret to consistency is staying cool under pressure.

“We play best when we’re most relaxed, so that’s what we try to look for,” O’Brien said. “When we’re super tensed is when we mess up and make a lot of mistakes.”

While O’Brien makes sure things are running smoothly for the back row, junior outside hitter Jacqueline Quade shows she knows how to keep her head in the game and continues to build on her own successful career as an Illini.

Quade finished last weekend with a total of 18 kills against Washington and has consistently been in the double-digits — including back-to-back matches where she racked up 22 kills against Northern Colorado and Colorado.

But the seasoned veteran sees the secret to consistency as nothing more than falling back into step.

“I think definitely there’s kind of a rhythm to it,” Quade said. “Especially getting serves so much; it’s like you’re passing and then you’re in your own rhythm and then that correlates, kind of, to everything else.”

A steady rhythm will certainly help the Illini as they continue to forge ahead into the season. After they return from Cleveland, the next challenge will come at home in the Illini Classic against Northern Iowa, Lipscomb and No. 14 Creighton.

The promise of the extremely competitive Big Ten also looms on the horizon, with four Big Ten teams currently ranked ahead of Illinois — Minnesota (1), Wisconsin (2), Penn State (5) and Nebraska (7).

With so much in store for Illinois in the coming months, it could be easy for a team with early success and potential to lull itself into a false sense of security. But Tamas continues to drive one message home for his team: don’t get complacent.

“The first weekend, we had a little bit of a scare with the Northern Colorado team, a good Northern Colorado team,” Tamas said. “I told them the target on your back just gets bigger, so you need to make sure we come in here every day and prove ourselves day in and day out, and results will come in with that.”