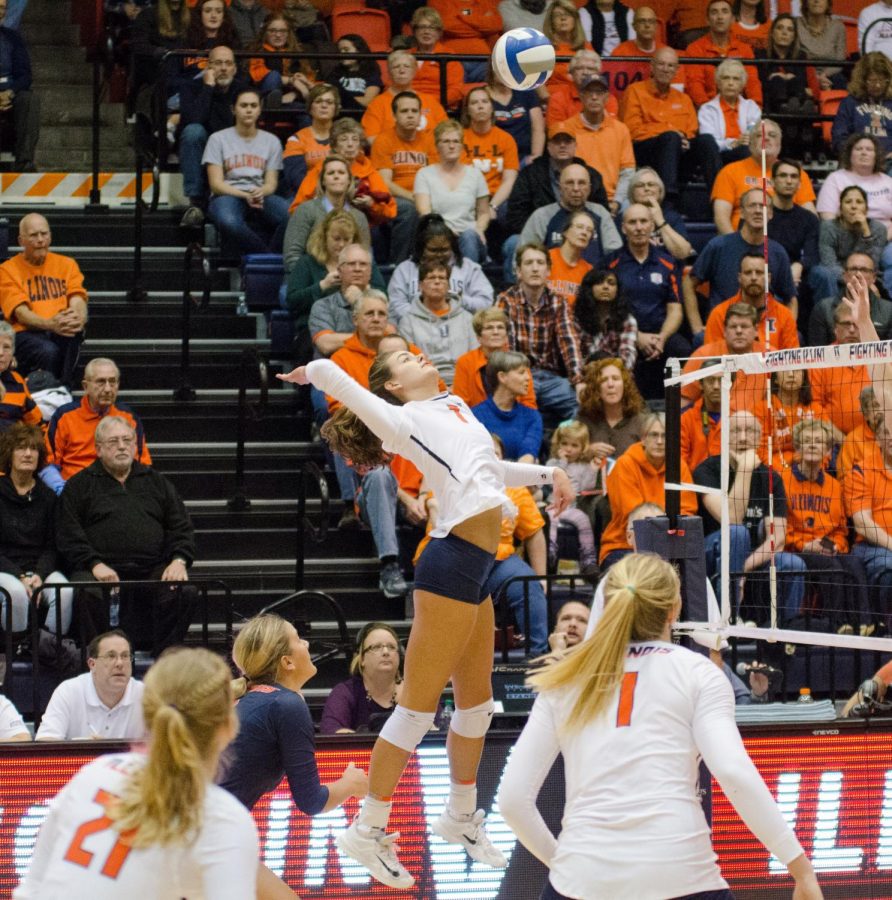 Outside hitter Jacqueline Quade prepares to spike the ball in Illinois’ game against Wisconsin on Nov. 17.

The Illini swept up another tournament title at the CSU Invitational in Cleveland Sept. 7 and 8.

“We’ve had our mix of some challenging moments,” said head coach Chris Tamas. “But also, we’ve had a mix of some dominant play, which you wanna see.”

It wasn’t hard to find the dominant play this weekend – it wasn’t until the last game of the weekend that the Illini allowed over 20 points in a set, winning the other eight sets by at least seven points.

Although the competition this weekend was not the strongest according to senior Jordyn Poulter, she has no problem with the results.

“The work that we are putting in practice and in matches is showing,” Poulter said.

Last weekend, the Illini got All-Tournament performances from Poulter, junior Jackie Quade and senior Alli Bastianelli. This weekend, a different trio picked up All-Tournament honors. Sophomores Megan Cooney and Morgan O’Brien were joined by freshman Taylor Kuper in the All-Tournament team, with Cooney picking up the MVP this time around.

Cooney dominated the final game against UC Irvine, with a match-high 15 kills and no errors on a .714 hitting percentage.

O’Brien added five aces to her season total against UC Irvine while collecting a team-high 48 digs across the weekend.

Kuper continued her versatile play with seven aces to go and 18 digs on the weekend.

The depth of six All-Tournament-type players isn’t lost on Poulter.

“Everyone does a great job doing their job,” Poulter said. “It makes it easy for everyone to be successful and to get team wins.”

O’Brien said she thinks the wealth of All-Tournament honors shows that the Illini have many important players and without all of them working together, “it wouldn’t be possible” to achieve these accolades.

This trio of wins marks the end of the Illini’s non-conference road trip that saw them win their first eight matches of the year, three of which were against ranked teams in either true road games or neutral sites.

“From week to week, we’ve been improving; the first week was more about kinda (surviving) … with the new lineup,” Tamas said. “Then last week, we beat two very good Pac-12 teams… this week, you wanna make sure you handle your business, and we did that.”

The Illini will be back in Huff Hall for the first time this year against another team this weekend at their non-conference home tournament, the Illini Classic.

“(Huff is) a great environment,” Tamas said. “When I first took the job, it was one of the things that drew me to the job.”

Along with the bolster of home-court advantage, Tamas is confident in where his team is right now.

“We have a really good unit,” Tamas said. “I think we are playing really well as a team.