Illini down Redbirds after in-state showdown 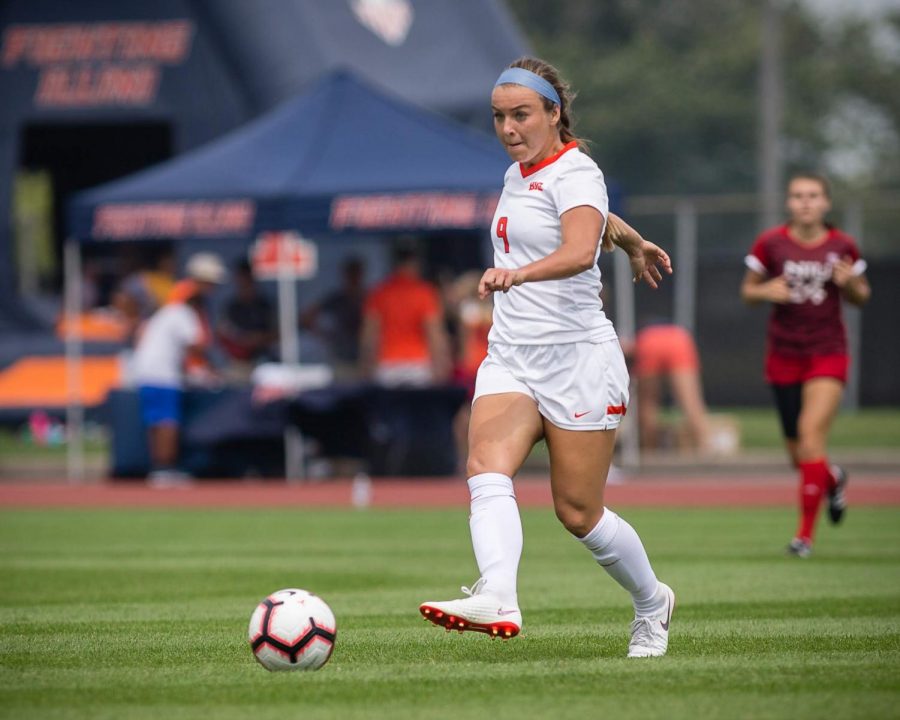 Illinois midfielder Lauren Ciesla (9) passes the ball during the game against Northern Illinois at the Illinois Soccer Stadium on Sunday, Aug. 26, 2018. The Illini won 8-0.

It took 13 shots on goal and 70 minutes, but on a chilly Sunday afternoon at Illinois Field, the Illinois soccer team was able to pick up its fourth straight win over rival Illinois State 1-0.

For the entire first half, the Illini were able to push the ball into Redbirds territory, shooting seven shots on net compared to the Redbirds’ three. No shots went in, but the Illini kept pushing and came out of the locker room at halftime with a lot of energy. They continued to amp the pressure up, as they were able to shoot six more shots in the second half until senior Lauren Ciesla was able to become the hero of the day with a kick that sailed over the Redbirds goalkeeper’s head and into the back of the net.

“We always know against Illinois State it’s going to be a gritty game, and we just had to keep going at them regardless of the score,” Ciesla said. “On the goal, I saw Patricia (George) cross it, and I was able to put something on it and I’m glad it went in.”

Head coach Janet Rayfield was pleased with her team’s gritty effort but was happier to see the team’s ability to stay composed down to the stretch.

“One of the things I loved about the team today was that they did not panic when we had 13 shots on goal and missed so many shots,” Rayfield said. “We have a whatever-it-takes maturity on both sides of the field.”

In the past four contests, the Illini have been able to outscore their opponents 16 goals to one, including three shutouts. Throughout the first seven games of the season, the team has been able to outscore its opponents 20-8 in route to a 5-2 overall record, including wins over No. 3 Duke and No. 14 Oklahoma State. To go along with that, the team has been distributing the wealth, with a combined total of 11 different goal scorers.

“I think overall, our team is clicking; we are playing really cohesive soccer,” Rayfield said. “I think we are fighting for and with each other, and believing in ourselves and that really helps.”

The team will hit the road to open up Big Ten play at Minnesota on Friday at 6 p.m.