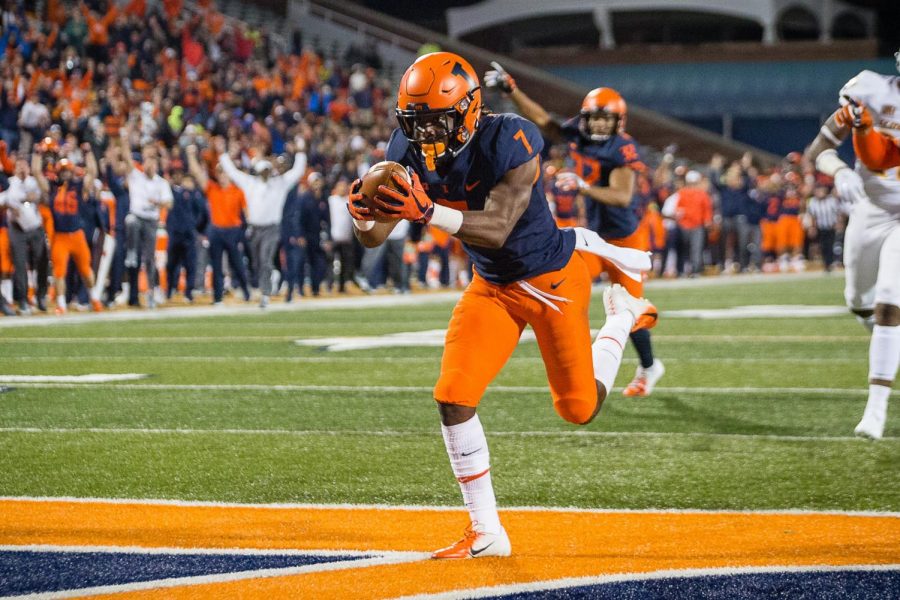 Illinois hasn’t lost in 2018, but last year’s 47-32 defeat at the hands of South Florida is still fresh in the minds of the team heading into this weekend’s 2:30 p.m. matchup at Soldier Field.

Coming in, it’s unclear whether Illinois starter AJ Bush will be ready to play, after he came out in the 34-14 win over Western Illinois with a hamstring injury.

True freshman quarterback M.J. Rivers came into the game in the second quarter and threw for 105 yards and two touchdowns, completing nine of 16 passes.

“Whenever a freshman gets a chance to play, especially the quarterback position, that’s tough duty,” said head coach Lovie Smith. “But (Rivers) really stepped up, gave our team a chance to win the football game.”

Illinois offensive coordinator Rod Smith is confident that if Bush is healthy for Illinois, he’ll be leading the offense.

South Florida comes into the contest after a 49-38 win over Georgia Tech, coming back from down 10 points in the fourth quarter to move to 2-0 on the year. Quarterback Blake Barnett helped lead a 21-point scoring run in the fourth quarter, capping the win with a touchdown run late in the game.

Though he isn’t as dangerous of a runner as last year’s starter, Quinton Flowers, Barnett is more than capable, and the Bulls are more comfortable throwing the ball than last year.

“Flowers was a huge run      threat, trying to get close to him and get him on the ground was a huge issue with the guys, with as elusive as he was,” said Illinois defensive coordinator Hardy Nickerson. “We won’t quite see that this year, but what Barnett brings is the ability to put the ball down the field and put it down the field with accuracy. We’ll have to make sure we are sound in the run game, and on the back end, make sure we’re sound in the passing game.”

Through two games, Illinois has let opponents average 407 yards of total offense, and is allowing third-down conversions 27.59 percent of the time. South Florida posted 426 yards and 219 on the ground against Georgia Tech last week.

The Bulls went on a 10-play, 88-yard scoring drive late in the game, and with his 19-yard rushing touchdown, helped deliver the win. Nickerson feels like he has a good idea of what to expect on Saturday.

“Watching them play the first two games, they haven’t changed a lot scheme-wise, other than they’re throwing the ball a little bit more,” Nickerson said. “With that being said, we’re just going through our normal process getting prepared and getting ready to play this team.”

Safety Stanley Green knows his defense will have to perform much better than the 2017 unit did when it gave up 47 points. The Illini need to contain South Florida and get the ball to the offense in positions where it can do damage, according to Green.

“It’s going to be a quick-paced offense; we’ll have to get lined up,” Green said. “One thing we’re talking about, is if you’re tired, let coaches know so we can get the rotation going.”

South Florida head coach Charlie Strong referred to the contest as a ‘trap’ game early in the week. But for Illinois, being the underdog is a position the team is used to, and the loss from last year provides plenty of motivation going into the rematch, Green said.

Illinois has dealt with a host of injury issues, including losing senior receiver Mike Dudek and freshman Edwin Carter for the season. Sophomore Ricky Smalling didn’t play against Western Illinois, but Lovie Smith indicated that he is close to making his return ahead of Saturday.

With a number of offensive weapons out, Rod Smith is stressing the importance of guys stepping into those holes and filling them with meaningful production.

If Illinois is going to get off to its first 3-0 start since 2011, when Ron Zook’s squad won its first six games, the team will need to have its other receivers make plays.