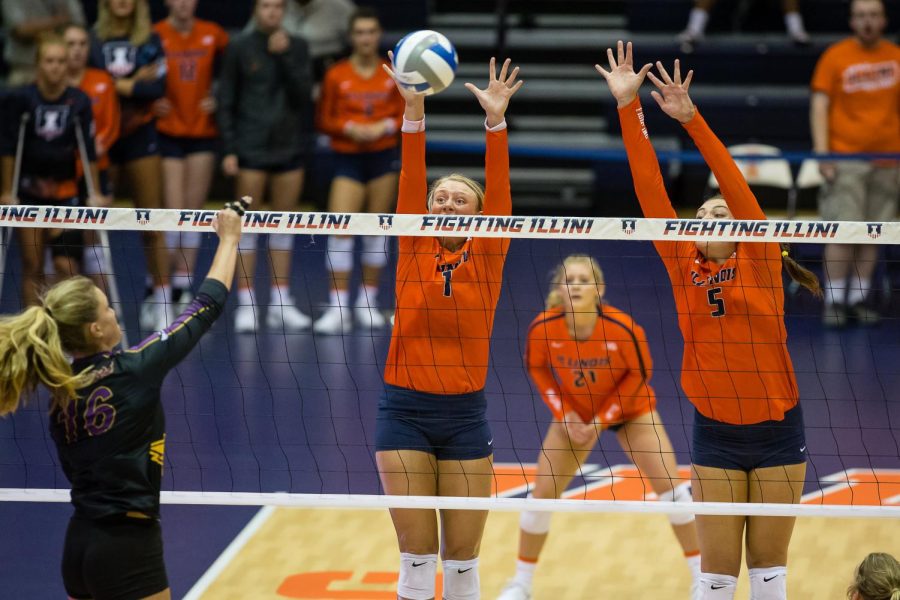 Illinois setter Jordyn Poulter (left) and middle blocker Ali Bastianelli (right) attempt to block the ball during the match against Northern Iowa at Huff Hall on Friday. The Illini won 3-0.

Illinois volleyball has been perfect this season.

The team has continued to move up in the rankings, earning the No. 8 spot in the country before it even set foot on its home court. While senior middle blocker Ali Bastianelli said she sees room for improvement, the Illini still managed to open their home schedule with a three-win sweep at the Illini Classic to finish nonconference play.

Illinois jumped on Northern Iowa early in set one, building an early lead that it would never relinquish, winning 25-13. The next set, however, was not as easy. The Illini racked up nine points from serving errors and saw a 24-20 lead turn into a 24-all thriller.

The serving woes continued into the third set and the Illini rallied after trailing 8-2 early on to complete the sweep. Junior Jacqueline Quade finished the game with the last three kills, ending a 15-kill day on a .333 hitting percentage.

As a team, Illinois outhit Northern Iowa in all three games and finished with a .297 hitting percentage to Iowa’s .122. While the Illini surrendered a number of points to errors on serves, Tamas wasn’t worried.

“The game plan was to serve aggressively,” Tamas said. “We’re gonna have to give a little when you serve that way.”

Illinois followed up with a dominant three-game sweep of Lipscomb, in which they didn’t allow the other team to get over 20 points in any of the sets played.

Then, the Illini moved on to their biggest test of the weekend against the No. 10-ranked Blue Jays.

Tamas believed the slow start was because the Illini tried to do too much, and Bastianelli agreed.

“Everything was on our side,” Bastianelli said. “I just think we got a little frazzled and we just had so much energy we didn’t know what to do with it.”

The Illini settled in and won the next two games, with help frome of senior Blayke Hranicka, who came in for Ashlyn Fleming in the first set and remained there for the next three.

“Blayke did amazing,” Bastianelli said. “She did everything we needed her to; it was really fun to see that.”

The decision to go with Hranicka over Fleming was a tactical one, according to Tamas.

“Blayke was just fresh and she matched up a little bit better with what they’re doing,” Tamas said.

Hranicka didn’t play against Lipscomb or Northern Iowa but said she was always ready to go. With Hranicka, the Illini cut the Jays’ hitting percentage from .273 in game one to .103 in game two and .186 in game three.

“It was really exciting because when I came in, we needed more energy,” Hranicka said. “It’s really easy for me to give people energy.”

However, one last test waited in the third set. After taking a 17-12 lead, the Illini gave up a seven-point run, giving the Jays a 19-17 lead.

Tamas, however, refused to call a time-out, and the Illini were able to get their feet underneath them. Quade highlighted the sets with team-high 21 kills to put them up 23-22 and finished out the Jays 25-23 in game four.

“It means a lot that the coaching staff trusts us to get out of those kinda runs,” Bastianelli said. “It means more for the players looking at each other and saying, ‘We got this.’”

Tamas said he doesn’t like to take timeouts and that he didn’t feel like the Illini were struggling with their serve-receive.

“They’ve been around me long enough to know that expectation,” Tamas said.

The late rally was bolstered by a loud and active crowd that filled both sides of the Huff stands.

The win kept the Illini’s season-opening streak alive and sealed an undefeated nonconference slate at 11-0. Illinois opens Big Ten play with a trip to Indiana, taking on Purdue and IU.

“There’s still room to improve,” Bastianelli said, “which is a little bit scary.”