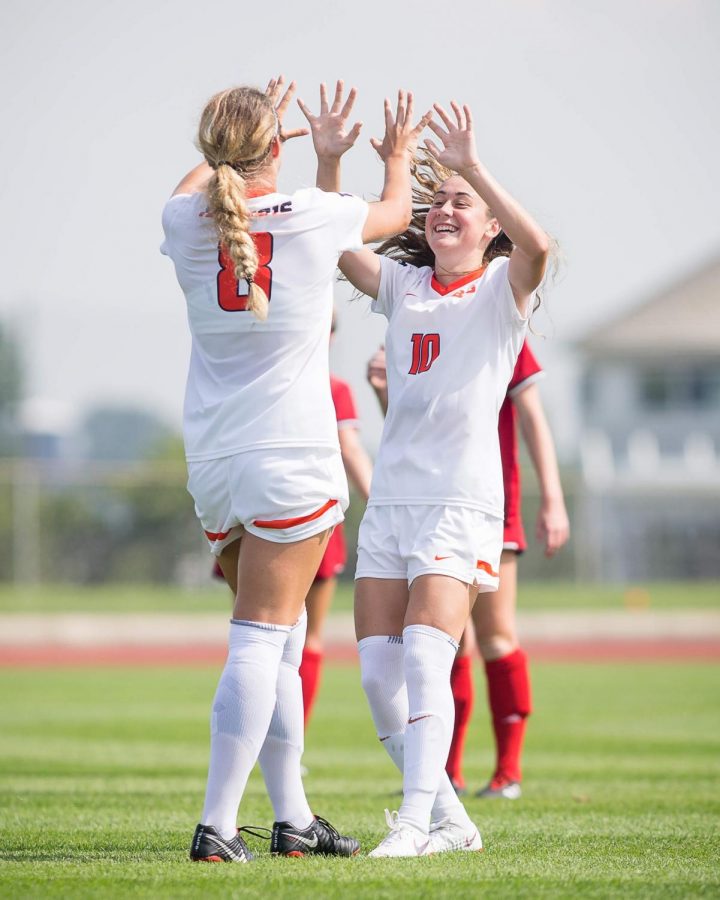 Seniors Carolina Ratz (8) and Hope Breslin (10) high-five to celebrate a goal against Northern Illinois on Aug. 26. The Illini won 8-0.

The IIllini looked to continue their winning streak as they headed up north to open Big Ten play against Minnesota.  Thanks to Illini junior Arianna Veland, who had two goals, the team picked up its fifth straight victory.

It didn’t take long for the Illini to strike first. Veland headed in a corner kick from sophomore Hope Breslin in the 13th minute of the game to put the Illini up 1-0. The early goal would be one of two goals for Veland in the game.

“If you talk about the impact she (Veland) has had on the year overall, she has really embraced the role that we have put her in,” said head coach Janet Rayfield. “We have had her playing as our defense center mid when she really came in as more of an attacking-minded player. She has embraced that role and is a big factor to us being in those physical, competitive games.”

Minnesota played aggressively and push the ball into Illinois territory, outshooting the Illini 5-2 in the first half, though the team couldn’t find the back of the net.

However, Illinois struck again in the 53rd minute of the second half when senior Katie Murray connected with Veland on a laser cross that soared above the Golden Gophers and landed right on the head of Veland. It marked the third assist of the season for Murray and the third goal of the season for Veland.

The 2-0 victory gave the Illini their first Big Ten win of the season. Accompanying that victory, Illinois managed to outscore its opponents by a remarkable 17-1 throughout a five-game winning streak, including wins over No. 14 Oklahoma State and in-state rival Illinois State.

“Any time you go on the road in the Big Ten and come away with a victory you really appreciate that,” Rayfield said.

Coming off the win, Illinois was then faced with another ranked opponent: No. 22 Wisconsin.

The two teams battled hard and pushed each other all the way to double overtime. After momentum swayed back and forth, the Badgers finally put a shot in the back of the net in the 104th minute of the game, ending the Illini winning streak at five games.

The Illini stabilized the Badger attack for most of the first half and into the second, but were outshot 14-4 over the course of the match.

In the second half, goalkeeper Jaelyn Cunningham came up with a big save in the 98th minute to keep hopes alive, but it wasn’t enough.

Despite the loss, Cunningham recorded five saves in the contest.

“Going forward in bigger games it always is going to take one more save, and that is going to be the next step for us moving forward,””Cunningham said.

Head coach Janet Rayfield took the game as a learning experience as she watches her young team progress and mature.

“We have to keep the ball and play until the whistle blows,” Rayfield said. “The last play of the game, the AR (assistant referee) called something and the referee overruled and didn’t blow his whistle, so we just have to play to the whistle and we’ll take that lesson as we move forward.”

The loss moved Illinois to 1-1 in Big Ten play and 6-3 overall. The team will take on Ohio State back home on Thursday for “Kick Cancer Night” at Illinois Field.