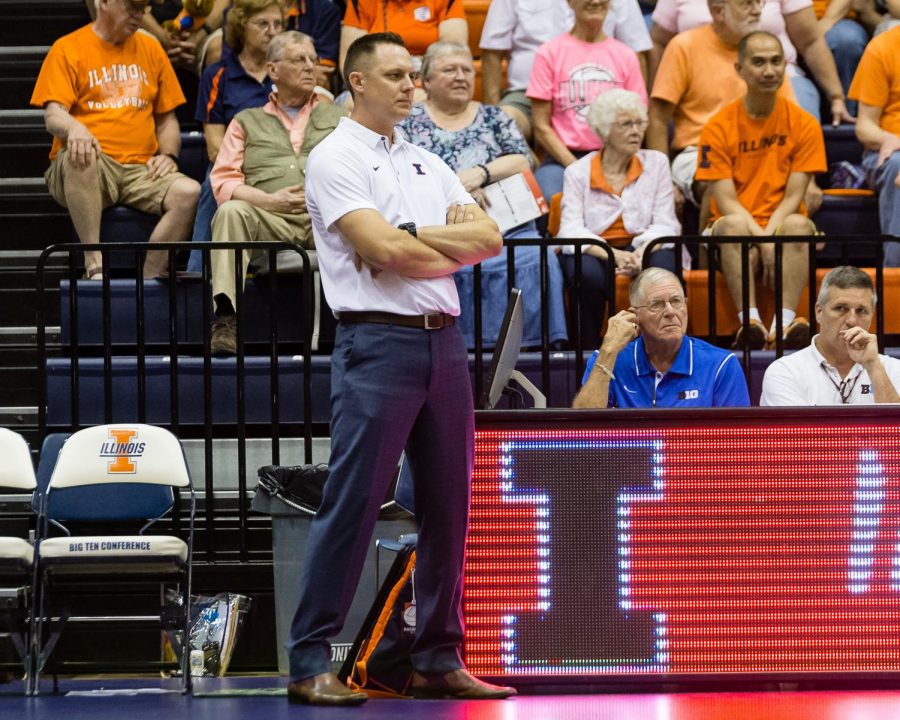 Illinois head coach Chris Tamas watches his team from the sideline during the match against Northern Iowa at Huff Hall on Friday. Illinois now looks ahead to Big Ten play.

For most of the nonconference schedule the Illinois volleyball team made winning look easy. But starting this weekend, the road gets a little harder.

“Every (Big Ten) game is gonna be like Creighton,” said Head Coach Chris Tamas. “A lot of it is about constantly improving in league play.”

With nonconference play over, the Illini will open the Big Ten schedule with a road trip to the state of Indiana, taking on No. 16 Purdue, then Indiana, on the road. After winning their first 11 games of the year, the Illini will look to extend their winning streak against familiar foes.

“I’m pretty excited to be headed to the home state,” said Jacqueline Quade, junior and Indiana native. “Lots of family coming out.”

For Quade and the upperclassmen, the start of Big Ten play will be business as usual. But for freshman defensive specialist Taylor Kuper, setter Diana Brown and junior middle blocker Ashlyn Fleming, the Big Ten is unknown territory.

For setter Jordyn Poulter, their goal is simple.

“It might go without needing to be said,” Poulter said. “Just keep doing what we’ve been doing.”

Perfect on the season, and fresh off a Sweet 16 run, Tamas thinks the team’s overall experience will help them this weekend.

“It helps having juniors and seniors who have played in the conference,” Tamas said. “They’re the ones who set the tone.”

What the Illini have done so far is put together the best nonconference resume        in the two years Tamas has been on campus, racking up four wins over top 25 opponents, two of which were true road games.

“It’s business as usual,” Tamas said. “They know the expectation, they know it’s coming every weekend.”

Because of the difficult early schedule, Tamas feels his team has learned lessons that will help them survive the gauntlet of Big Ten play.

The first of those lessons came against No. 25 Colorado State, who came back from down 2-0 to force a decisive fifth set early this season.

“We always tell them ‘There’s no easy games here,’” Tamas said. “You battle every day. You’re gonna have some human nature stuff but we gotta make sure we stay focused.”

There certainly will not be an easy game on Friday against No. 16 Purdue, who also comes in undefeated at 11-0. Lead by preseason All-Big Ten senior outside hitter Sherridan Atkinson, Purdue has risen from No. 23 in the season-opening poll, as well as Lipscomb the Bisons in three sets, just like the Illinois.

The Hoosiers don’t boast the same record as The Boilermakers. Indiana has lost to Northern Iowa —who Illinois beat 3-0 —part of its 9-2 record so far.

The road may not be easy, but it’s what Tamas and the Illini signed up for.

“You’re gonna be in front of two, three, four, five, six, seven, eight thousand people,” Tamas said. “This is kinda why you’re at Illinois and in the Big Ten.”