McLaughlin off to impressive start this season 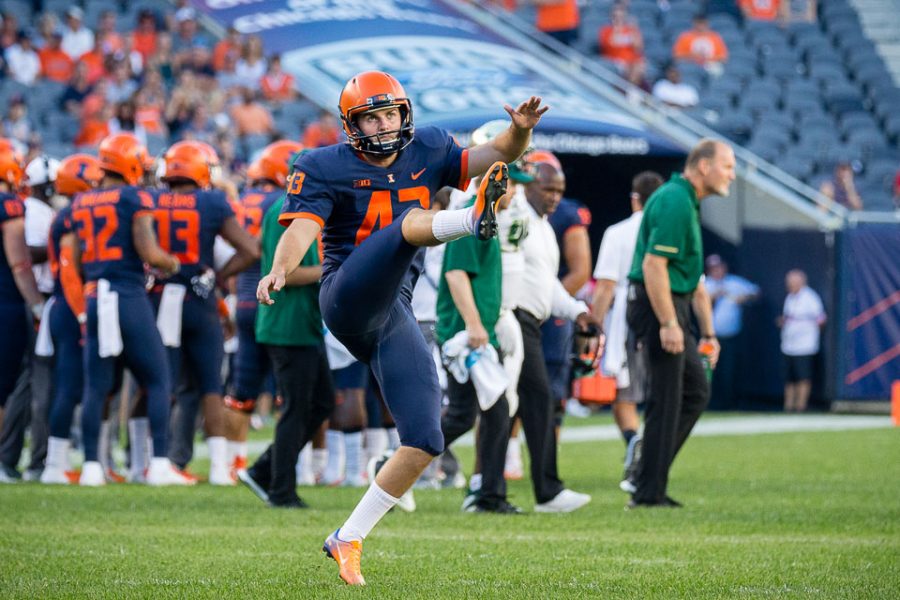 Illinois kicker Chase McLaughlin practices during a timeout in the game against USF at Soldier Field on Saturday. McLaughlin went 4-for-4 in the game and is the first kicker in Illini history to have three consecutive games with a 50-plus yard field goal.

Illinois has only played three games so far this season, but kicker Chase McLaughlin has used that time to make history.

McLaughlin is confident and composed when kicking field goals, but his performance as of late is not due to the mental factors. Rather, McLaughlin points to his added leg strength during the offseason, and with that, he’s become more accurate from deep.

The Cypress, Texas, native has always been a near-lock from within 40 yards, but the Illini have rarely attempted long field goals until this season.

“(Head strength and conditioning coach) Joey Boese and the strength staff have done a great job of helping me get stronger, quicker, faster,” McLaughlin said. “Then just being more confident out there, knowing I can hit the big ball and stay true to my form, my swing and hit it through.”

Illinois lost a close game at Soldier Field against South Florida last Saturday, squandering a 19-7 lead, but it was McLaughlin who single-handedly built most of the lead before the comeback.

He hit four field goals, including two from beyond 40 yards, and a 53-yarder on the last play of the first half to give Illinois a 16-7 lead going into the break.

Head coach Lovie Smith is well aware of McLaughlin’s four field goal feat, but he was also impressed with his work on kickoffs. South Florida freshman Terrence Horne had two consecutive kickoff returns for touchdowns in week two against Georgia Tech, but McLaughlin never gave the explosive return man a chance — each of his five kickoffs sailed into the end zone for touchbacks.

In fact, McLaughlin has been a bore for opposing returners so far this season, with 16 of his 18 total kickoffs going for touchbacks.

“This past week, we were playing a great returner,” Smith said. “There are a lot of different ways to take him out of the game. One is to just boom the ball out of the end zone. As you can see, Chase has worked awful hard to get stronger, and we see that in his leg strength. But it’s about being accurate too, with those field goals. Right before the half that gave us a big boost.”

McLaughlin didn’t expect to see so much action on the place-kicking front so early — especially with three attempts of over 50 yards — but he’s been prepping for such opportunities just the same. 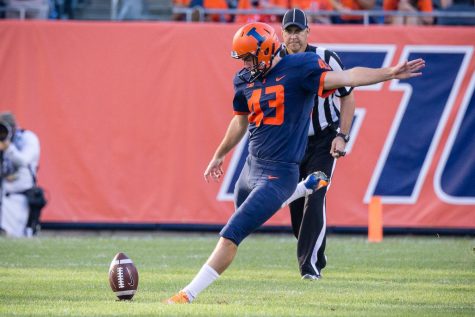 “They are usually such a rarity, doesn’t seem like it this season so far,” McLaughlin said. “But they’re definitely something we focused on because it has been a weaker point in the past. Inside of 40, I’ve been pretty solid and feel comfortable there. We’re just trying to push the range a little bit.”

Improving his range was the main focus for McLaughlin heading into the season. Working with special teams coordinator Bob Ligashesky, McLaughlin has been attempting more long-distance field goals than in past seasons, and he thinks those reps have helped improve his accuracy from further out.

“The biggest thing is that, just mentally, once you get back there and hit a big ball,” McLaughlin said. “When you get closer, the uprights seem a whole lot bigger. We’ve been doing it in practice all summer, all fall camp and then going into the season, so it’s just something I feel more comfortable doing. Coach Ligashesky has done a great job of giving me more long-distance kicks to feel more comfortable in the game.”

The praise hasn’t just been raining down from the coaching staff; McLaughlin’s teammates have also been impressed by his consistency. Sophomore running back Mike Epstein put it simply.

“He’s been amazing,” Epstein said. “Dude has been booting it.”

While the team works on its various units throughout practice, McLaughlin and the other specialists split up with Ligashesky to do their own drills. But Epstein said that despite that degree of separation in practice, McLaughlin has earned the respect of his teammates.

“He works on his craft every day. I’m just proud,” Epstein said. “I don’t always want to get three points on the board; I’d rather get seven, of course, but sometimes, when we hit the red line, he’s always there for us.”

Delivering consistently when the offense can’t get into the end zone is something McLaughlin takes a lot of pride in. He regularly talks about how, ‘when his number is called,’ he’s got to be there to make the plays he’s expected to.

So far, the senior has delivered. Though the season is young, he knows he has made a tangible difference.

“I don’t think it’s something that changes (the offense’s) mentality, but I think it definitely helps them,” McLaughlin said. “Just knowing once they get past a certain yard line, that we are in range depending on the game. Just helps them feel more confident, just like they help me feel more confident out there making the kick.”