Team looks to bounce back against Nittany Lions 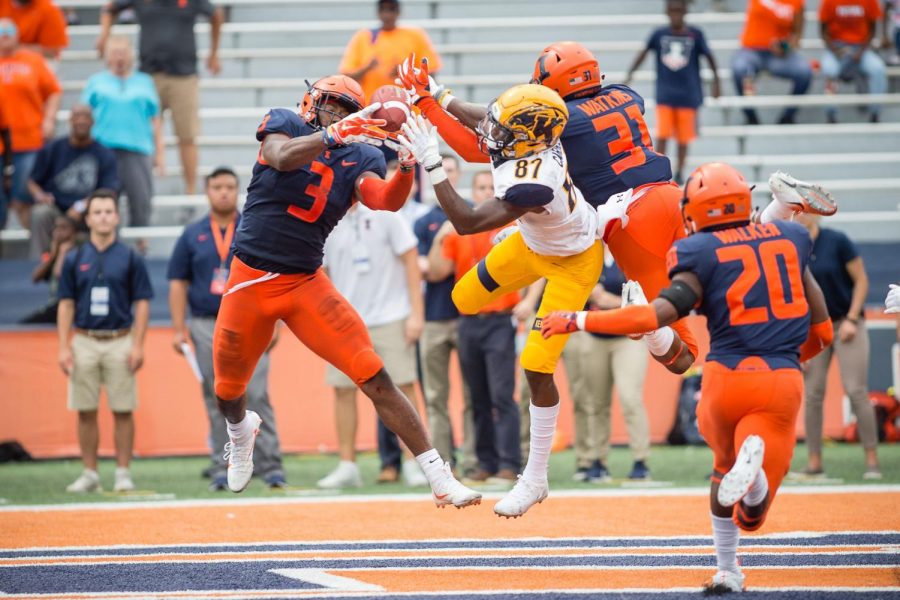 Illinois linebacker Del'Shawn Phillips intercepts a pass during the game against Kent State at Memorial Stadium on Sept. 1. Phillips has been a leader on defense, grabbing two interceptions this season.

The Illini figured out how to start strong; Now it’s about the finish.

Illinois football is back for a Friday night under the lights game against undefeated No. 10 Penn State. The teams have met a total of 23 times with the Nittany Lions claiming 18 of the wins.

Penn State won the last meeting 39-0 at University Park on Halloween in 2015.However, the last time the matchup was in Champaign, a 36-yard field goal with eight seconds left claimed the 16-14 victory for Illinois.

The Illini enter this game in an eerily similar place as last year, suffering their first loss at the hands of the Bulls before heading into Big Ten play. Last season, the team didn’t pick up another victory for the rest of the year. Now, it’s about breaking that Big Ten losing streak.

“We’ve got a better focus this year,” said linebacker Del’Shawn Phillips. “We’ve got more guys that want it, more guys flying at that ball, more guys who want the ball to themselves.”

Defensively, the Illini have been able to capitalize on mistakes made from opposing offenses.

The Illini defensive line has knocked down nine passes in the first three games. Defensive end Bobby Roundtree leads the nation with four, while defensive tackle Jamal Woods is tied for second nationally with three.

While the line forces fumble, the secondary has made plenty of mistakes, with missed assignments constantly being an issue.

This week, however, fans may see the potential return of Bennett Williams and Nate Hobbs, which may put the coverage confusion to rest.

The two, along with Carmoni Green, Deon Pate and Lou Dorsey have been suspended indefinitely for a violation of team rules but have been getting first-team reps at practice this week.

On the offense side of the ball, the Illini have struggled to complete their drives.

‘It helps when you keep the same group of guys,” said head coach Lovie Smith. “They have gotten a lot of time together, playing together. And I think it helps the confidence, too, of course when you talk about those explosive plays. They know where it starts and they know how big of a part they have had in it. It’s going to be a big challenge this week, but I know the offensive line is looking forward to that challenge.”

An offensive powerhouse for the team has been running back Mike Epstein, who collected 113 rushing yards and one touchdown on 19 carries against South Florida, his second-straight 100-yard game and the third in his Illini career.

“When my number is called I just try to go out there and make plays,” Epstein said. “They trust me with the ball in my hands and that’s special.”

Special teams is what the Illini relied on throughout the South Florida game. Kicker Chase McLaughlin was 100 percent on field goal attempts Saturday and is the first Illinois player ever to hit a 50-plus yard field goal in three consecutive games.

“Chase has worked awfully hard to get stronger, and we see that in his leg strength, as well as being accurate with those field goals,” Smith said. “Right before the half, that gave us a big boost. Very happy with what those guys have done.”

The team is still one of the youngest teams in the nation and with the threat of Penn State quarterback Trace McSorley, a mobile quarterback, the Illini are faced with their biggest challenge thus far.

No matter what the critics may say, Illinois is confident it can compete.

“We’re going to show up excited about seeing exactly how much improvement we can make and how we come back from adversity,” Smith said.