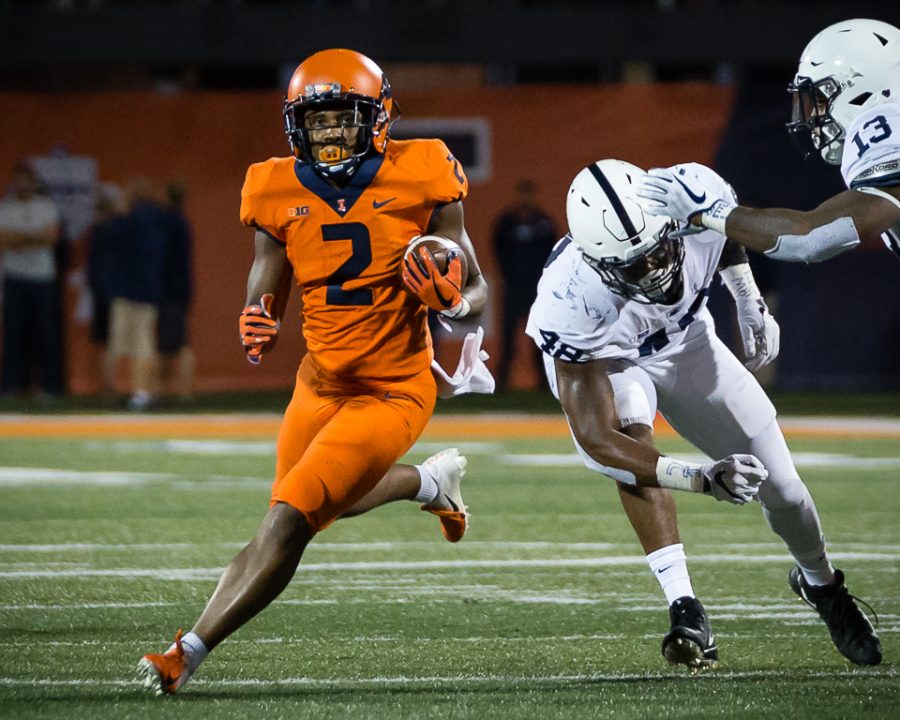 Illinois running back Reggie Corbin (2) carries the ball down the field during the game against Penn State at Memorial Stadium on Friday, Sept. 21, 2018. The Illini lost 63-24.

Floundered in the fourth quarter

Everything fell apart for Illinois in the second half against No. 10-ranked Penn State.

The Nittany Lions steamrolled the Illini defense, posting 387 rushing yards (591 yards total), many of which came in large bursts on big plays.

Illinois went from vying for the upset to failing to cover the 26.5-point spread in a nightmare fourth quarter. Penn State reached the end zone on its final six drives of the game, scoring 35 points in the fourth quarter alone.

By comparison, Illinois’ final six drives ended in a touchdown, a punt, an interception, a missed field goal and a turnover on downs.

“The fourth quarter, we can’t play much worse,” said head coach Lovie Smith. “The fight that we showed throughout, hanging in there early on, withstanding a little bit of their big punch, then the third quarter to go ahead. There are some things to build on. We are getting better as a team, but we’re not ready to play 60 minutes yet.”

Smith was happy with his team’s performance through most of the game, but he lamented how Illinois was so easily overwhelmed down the stretch.

Illinois showed promising signs of what can be down the road, but it lost a lot of face in the fourth.

“When you give up that many points in the fourth quarter, there are a lot of words you can use,” Smith said. “We just didn’t play the way we needed to there, when you give up long runs like that.”

Rod Smith is the answer for the Illini offense

Illinois had perhaps its best moment of the Lovie Smith era on Friday night—a reverse handoff to receiver Trenard Davis, a former quarterback, who found a wide open Ricky Smalling in the end zone to give the Illini a 24-17 lead with 10:36 to go in the third.

Rod Smith fooled the Nittany Lions, and he had his offense moving the ball well for the vast majority of the game.

Running backs Reggie Corbin and Mike Epstein each had their moments.

Corbin found the end zone on a two-yard score and breaking loose for a 51-yard run that set up Smalling’s go-ahead score. Epstein broke free for several first down carries and averaged 6.5 yards on 12 carries for the night for 72 yards. In total, the Illini racked up 174 yards on the ground.

Sophomore right tackle Alex Palczewski said Smith’s simplifying of his schematics and plans has helped the Illini grasp things early on in his tenure.

“He’s made it easy for us to understand,” Palczewski said. “He lets us just go out there and do our jobs.”

On Friday, the offensive line was a bright spot, opening sizable holes for the running back corps at times, before falling off similarly to the rest of the team in the second half.

“We came out fast, we blocked really hard,” Palczewski said. “We were doing our jobs and everything we needed to do in the first half.”

Smith also had M.J. Rivers connecting with a number of receivers in open positions, though it didn’t last. The true freshman quarterback went 9-for-14, throwing for 71 yards and a touchdown before falling away late in the game.

Corbin leveled high praise on his line, crediting them with doing the groundwork for him so he could find his openings.

“The way they were out there protecting, they fought,” Corbin said. “They never stopped, they never asked to be subbed out, they were the only guys that stayed in the entire time. They’re the core of our team.”

Illinois gained a cluster of suspended players back on Friday night, most notably Lou Dorsey, Bennett Williams and Nate Hobbs. The consensus was that it was a boost on the field and for morale.

But while Illinois was reinforced with some of its greater talents, players continued to go down with injuries.

Starting defensive tackle Jamal Woods got hurt, and after missing the first two games because of an injury, redshirt freshman lineman Lere Oladipo got hurt again. Potentially having the most worrisome injury, Bennett Williams was hurt in his return to the field as well.

None of the Illini returned to action.

When paired with the hamstring injury of starting quarterback AJ Bush and the season-ending knee injury of Mike Dudek, Illinois has had a rough start to the year health-wise.

One positive for Lovie Smith and Co. is that the team enters its bye week now, and it won’t take the field for a game again until Oct. 6 at Rutgers.

“Of course, the bye week is coming at the perfect time,” Smith said. “Hopefully the next time we play, he’ll be ready to go.”

The Illinois offense was solid, for the most part, against Penn State, a team few expected Illinois to move the ball well against. Lovie Smith’s play-calling was on point at times, especially on his trick play call that put Illinois ahead and scoring drives in the first and second quarters. When it mattered most, as the Nittany Lions poured it on late, the unit fell off and was unable to move the ball. Sam Mays and Ricky Smalling both had memorable drops, and the offensive line wasn’t able to sustain the same gaps it was opening earlier.

To be frank, the defense was atrocious on Friday. Illinois gave up 591 yards in total and allowed Penn State to convert on 9 of 11 third downs, including several that went for big gains. Two takeaways keep the defense from getting an F, but they weren’t enough to even slow the Nittany Lions. Illinois gave up six straight touchdowns to end the game. Unacceptable. Hardy Nickerson has a lot of work to do during the bye week.

Besides Ricky Smalling’s touchdown catch, Reggie Corbin had Illinois’ biggest offensive moment, breaking out for a 51-yard dash to set up the go-ahead score. He posted 87 yards on 11 carries, averaging 7.9 yards per rush. Though he wasn’t able to do much later, no one else was either. The junior put his team in a position to succeed, and though he wouldn’t throw his defense under the bus after the game, this one’s on them. Corbin now has 327 rushing yards in 2018, more than four times the 78 yards he managed last season.