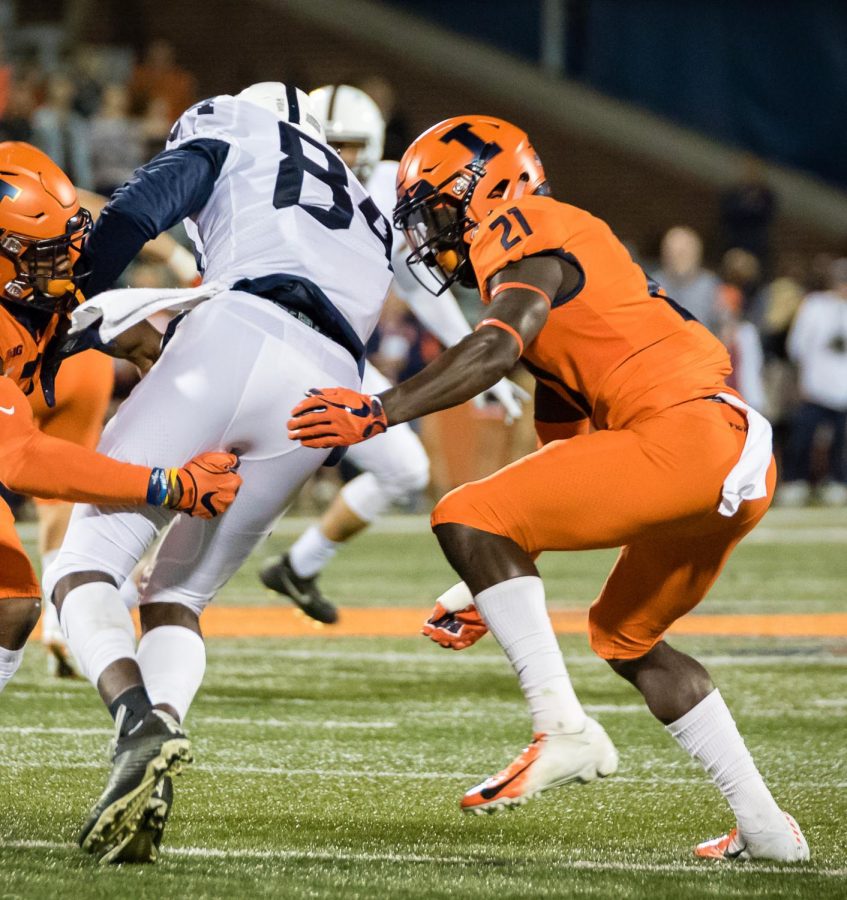 When Illinois recruited Jartavius “Quan” Martin out of Lehigh Acres, Florida, the 6-foot-1-inch, 190-pound defensive back saw something in the program: a promising opportunity of early playing time.

Upon his arrival to campus, and as training camp progressed, Martin consistently took meaningful reps at cornerback. He emerged as one of the more game-ready freshmen, nearly a sure bet to see the field at some point during the year.

It urns out Martin’s time to play came sooner and in a more prominent role than even he expected.

Ahead of the season-opener against Kent State, the team announced the indefinite suspensions of sophomore starting corner Nate Hobbs and 2017 Freshman All-American safety Bennett Williams, among three other players.

Leading up to the game, before the suspensions were made public, the coaching staff told Martin he would start.

For the true freshman, it was validation for the work he’d put in since joining the team.

“I always try to aim for the best; I worked my hardest during the summer workouts,” Martin said. “Camp, I went out and played with the older guys a lot; I was getting in the rotation. The first game, Coach told me I was going to be starting. I had to step it up; I just played my role.”

Martin wasted no time making an impression on the field, intercepting a tipped pass from Kent State’s Woody Barrett. He made program history in his second start the following week against Western Illinois, becoming the third true freshman to start at corner for Illinois since 1980, after Vontae Davis in 2006 and teammate Tony Adams in 2017.

Junior safety Stanley Green has been impressed with his young teammate’s start to the year, and he saw flashes of Martin’s potential in camp. He was near the top of the team in interceptions.

“(Martin) was one of the only freshmen in the nation who caught a pick in the first week,” Green said. “He’s a pretty good corner to me. I feel like he’s a ball-hawk; he knows how to get around the ball, get the ball.”

Third-year defensive coordinator Hardy Nickerson has been pleased with Martin’s performance in a starting role, especially in light of injuries and suspensions in the defensive back corps.

“He’s done a nice job for a young guy coming in,” Nickerson said. “He’s picked up things pretty fast. We’ve been working really hard, getting prepared, getting all the guys prepared each week, and he’s been able to translate all the meeting time, classroom time and all the hard work we’ve been putting into training camp. He’s been able to translate that over to game day. It’s been pretty exciting to watch from him.”

For Martin, it’s been a matter of seizing the moment, being ready for any situation and not worrying about his relative inexperience compared to other players on the field. Starting wasn’t what he expected, but he came to Illinois wanting and preparing to play real minutes immediately.

“You know, a lot of freshmen don’t have this opportunity,” Martin said. “The older guys talked to me before the games and during camp. They told me, ‘be ready for anything; expect anything to happen because you never know when your time will be up.’ And my time was up.”

In Illinois’ first loss of the season, a 25-19 heart-breaker to South Florida at Soldier Field, Martin was heavily involved again.

At the start of the second quarter, walk-on linebacker Michael Marchese knocked the ball out of an opposing receiver’s grasp, popping it into the air.

When the ball came up, he snatched it for the second interception of his young career.

His outing wasn’t without any blemishes though — Martin got beat in man coverage with about 9:30 to go in the game, giving up a long pass that moved South Florida into the red zone, where it added a field goal to pull within two points of Illinois.

Eventually, the Bulls scored the game-winning touchdown after a coverage breakdown for the Illini left a receiver with a wide-open path to the end zone.

Martin isn’t satisfied with his game; he knows there’s lots of room to improve as the season goes on. He wants to keep tacking on more interceptions as the year progresses, but for him, it’s really about steadily progressing through practice and game situations.

“Every day I come out, it’s a new day,” Martin said. “Yesterday is the past; I just work hard each and every day, expect to get better.”

As the suspended players returned to action against Penn State, Martin’s playing time took a step back, as he registered just a single tackle in the 63-24 loss.

However, Martin’s early playing time should push things in the young defensive back’s favor, and he remains confident that his work ethic will continue to earn him opportunities going forward.

“I just have a passion for (football),” Martin said. “I’ve been playing this game ever since I was five years old. I dreamed of times like this. So to be able to actually come and turn my dream into actuality, it’s a great opportunity.”