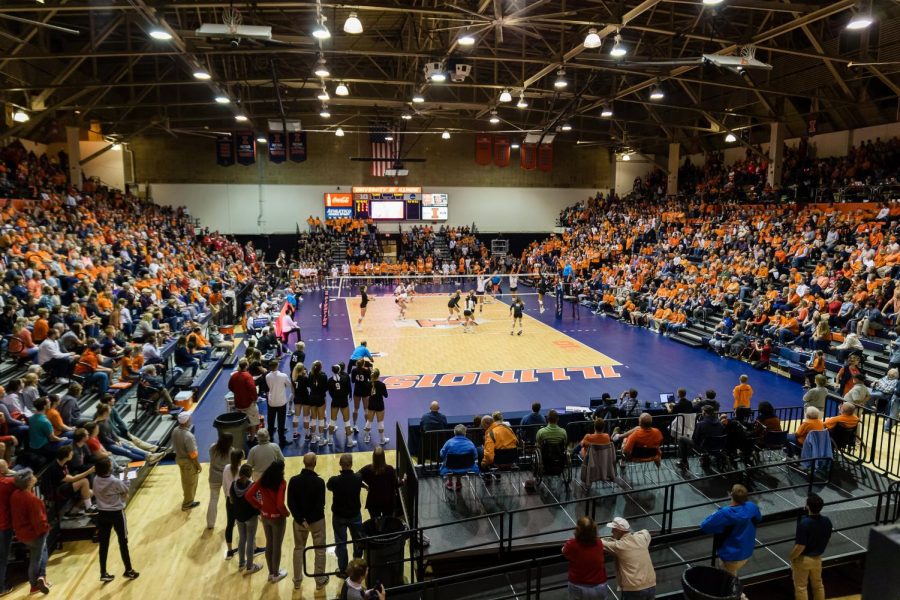 Illini fans fill Huff Hall during the match against Nebraska on Saturday. 3,569 fans attended this game.

It was a weekend of highs and lows for the Illinois volleyball team. Back home after successful road games at both Indiana and Purdue, Illinois managed to snag another conference win against Iowa on Friday. However the team fell for the first time this season against former NCAA champion Nebraska on Saturday.

On Friday night, the Illini made quick work of the Hawkeyes, shutting them down in straight-sets with a balanced attack led by junior Jacqueline Quade and senior Ali Bastianelli. Both Quade and Bastianelli were in double digits, with 12 and 11 kills, respectively. Quade also grabbed her seventh career double-double with 12 digs.

“It’s a really hard combination to stop when all three hitters in the front are doing some damage,” Bastianelli said. “It’s all in our pass and even our serve, getting them on a system and getting a good ball in return.”

Making sure the front row could also do damage was senior Jordyn Poulter, who continued her consistent season performance with a team-high 46 assists.

A seasoned veteran, Poulter accredits her many options on the court for her success.

“I always think the passing, if we’re passing well, it’s really easy for me to distribute the ball around and keep their block guessing,” Poulter said. “I think they started scheming a little bit because they were putting two up on Ashlyn (Fleming), and then we were able to set over them and get one-on-none.”

With the momentum of their Friday victory and the overwhelming crowd support  at Stuff Huff on Saturday, the Illini seemed set to face off against the conference-championship-contending Cornhuskers.

It was an intense conference match-up, not only because of Nebraska’s national rank but also because of head coach Chris Tamas’ familiarity with the Nebraskan program, having served as assistant coach there from 2014 until coming to Illinois in 2017.

Despite the familiarity, Tamas’ team could only take one set from the Cornhuskers and plans on using the loss as a useful learning opportunity.

“We were in the right spots, we were making the right moves, but we just weren’t quite as clean as (we) have been, but again, Nebraska’s going to put pressure on you like that, so it’s just about how do we go back to training and get better for the next match on Wednesday,” Tamas said. “It’s always a good learning lesson when you get beat. We’ve never lost; we’ve only ever won or we learned.”

Saturday’s matchup wasn’t without its standout moments; Quade continued to dominate the court for the Illini with 21 kills.

However, Quade realizes that the biggest battle she and her teammates face as they head deeper into Big Ten competition is the one with consistency.

“We’re doing a lot of really good things, which is super exciting, but I think now the issue is how do we maintain that throughout an entire match,” Quade said.