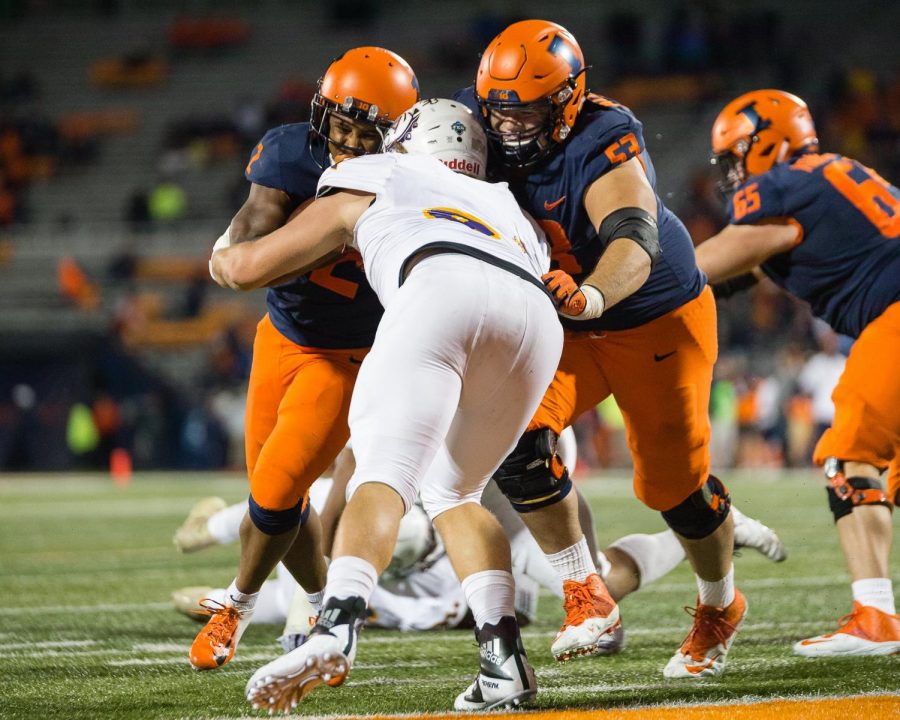 Illinois offensive lineman Nick Allegretti (right) blocks for running back Reggie Corbin (left) on his way to the end zone during the game against Western Illinois at Memorial Stadium on Sept. 8. Offensive coordinator Rod Smith wants to improve protection to open up running lanes this season.

The Illini have not won a Big Ten football game in 693 days.

The Nov. 11, 2016 victory over Michigan State came in Lovie Smith’s first season. A winless venture through Big Ten play through all of last season puts plenty of weight on the Illini as they head to Piscataway, New Jersey to play the 1-4 Rutgers Scarlet Knights.

After starting 2-0 with wins over Kent State and Western Illinois, Illinois has dropped tough contests to South Florida and Penn State. Last year, the team started 2-0 and then lost its last 10 games.

But the Illini are convinced things are different this time around.

“Last year, even though it had only been two losses, there was kind of an aura around the program like, ‘We need to pick this up or it’s not going to go well,’” said senior offensive lineman Nick Allegretti. “And it ended up not going well.”

On paper, Allegretti’s assertion that Illinois is a different team holds up.

Though Rod likes how his offense has been developing so far in 2018, he acknowledges there is still plenty of room for growth.

“I think we’ve made some strides, and we’re doing some good things (in the run game),” Rod said. “Throw game needs to be better: we’ve got to learn to get separation as wide receivers, protect us a little bit better and then throw the ball better at times. I’ve said it all along, it’s a work in progress.”

At the beginning of the season, the Illini were favored to win in the first two games of the year, but they opened as 1.5-point favorites heading into this week.

Part of that comes as a result of the Scarlet Knight’s struggles on the field in Chris Ash’s third season at the helm of the program. Rutgers opened the year with a 35-7 win over Texas State, but that remains its only win.

Illinois knows its opponent is ready to battle, and the team can only hope it can replicate the 24-7 win from 2016 in Piscataway.

That was the last time Illinois won a road game. To do so again, Illinois will have to do a better job against the run than it did against Penn State (387 rushing yards, six touchdowns). In that game, the Nittany Lions ran roughshod over the Illini defense, scoring touchdowns on their last six drives to win comfortably after the Illini led in the third quarter.

Defensive end Bobby Roundtree is eager for the opportunity to get after Rutgers’ quarterback, whether it ends up being true freshman quarterback Arthur Sitkowski or redshirt senior Giovanni Rescigno, to whom Ash has turned when Sitkowski has struggled. He thinks locking down in the run game is the best way to do that.

“(I expect) lots of running,” Roundtree said. “ They’ve got a new quarterback. I hear he stays in the pocket most of the time. If we stop the run, most likely they are going to pass more, and then it’s going to give us more chances back there.”

On the other side of the ball, Allegretti is confident that if his team can control the tempo, it will   be able to wear out the Scarlet Knights, especially as the game progresses.

“Those four d-linemen are going to play most of the game,” Allegretti said. “They’ll have a little bit of rotation, but with them playing the whole game, if we can push the tempo, that’d be huge for us.”

Illinois has been playing at a much faster rate than in 2017 under Garrick McGee,and seems to match up better against Rutgers’ defensive line, which isn’t as deep as the likes of South Florida’s, for example, which rotated heavily at the position to avoid tiring out late.

Rod knows he deinitely wants to see more of one thing on Saturday: touchdowns. If his team can punch the ball into the end zone more, instead of relying on kicker Chase McLaughlin, he thinks Illinois will lock up its third win of the year and surpass its 2017 win total.

“I love Chase McLaughlin;  he’s a great dude, man,” Rod said. “I love that guy. But golly, I want to see him kick extra points, not field goals. You know what I mean? That’s our goal. Obviously, we’ll settle for field goals if we have to because it’s points, but we’ve got to start punching the ball in the end zone.”