Grades and game notes from Illinois’ 38-17 win over Rutgers 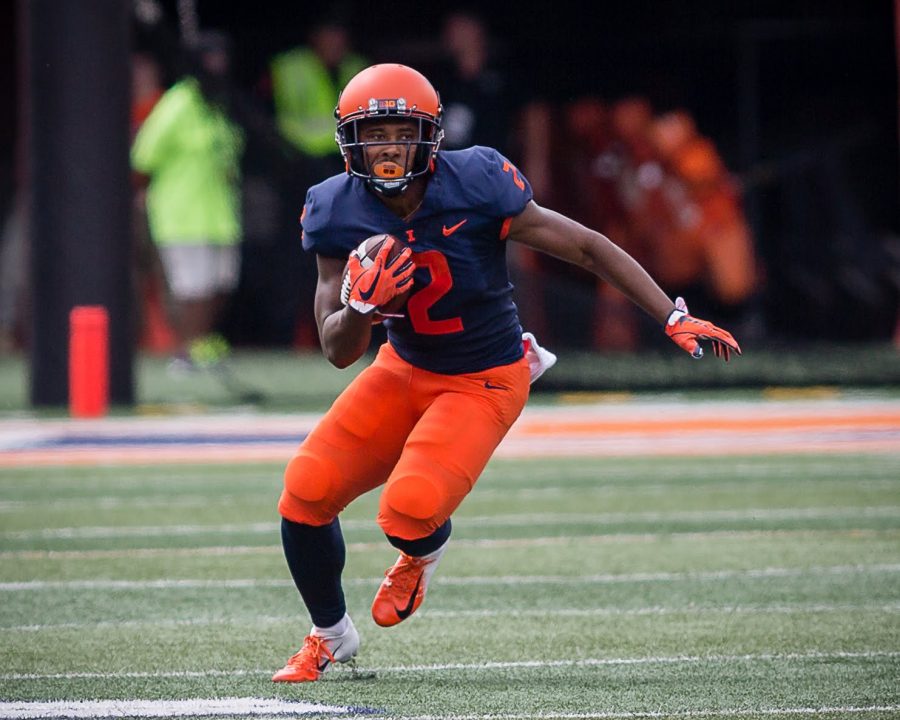 Illinois running back Reggie Corbin (2) runs with the ball during the game against Kent State at Memorial Stadium on Saturday, Sept. 1, 2018. The Illini won 31-24.

After only rushing for 78 total yards in 2017, junior running back Reggie Corbin ran for a career-best 137 yards on just 11 carries, averaging 12.5 yards per carry. In the second quarter, Corbin broke out on the right side — following quarterback AJ Bush’s lead block — for a 73-yard touchdown run, the 25th-longest in school history.

Sophomore Mike Epstein added 63 yards on nine carries, most of which came on an explosive 41-yard scoring burst late in the fourth quarter to seal the 38-17 win.

In his return from a hamstring injury he suffered in week two, Bush added 116 yards and two touchdowns on 18 carries. It was Bush’s second game this year with over 100 yards on the ground — he rushed for 139 yards against Kent State in the season-opener on 21 carries. No Illinois quarterback has had multiple 100-yard rushing performances since 2008, when Juice Williams had two.

Coming in as the No. 18 rushing offense in the country at 243.5 yards per game, the Illini were expected to attack Rutgers (No. 109 rushing defense, 208.8 yards per game) on the ground. Bush went to the air only 18 times and the Illini controlled the game for most of the way, despite a brief 10-7 Rutgers lead in the first quarter.

Though it won’t reflect as well in the stat column as the performances of freshman corner Jartavius “Quan” Martin, who had his third interception in five games, and sophomore linebacker Jake Hansen, who led the team in tackles with nine (six solo), Carney was quite the disruption.

He had two tackles, along with two quarterback hurries and a pass breakup, but Carney also provided something the Illini line has needed badly in recent weeks: significant penetration against an opposing offensive line.

Coming off the edge, Carney regularly bested Rutgers’ tackles and was able to get into the backfield. On one occasion, he nearly got to freshman quarterback Arthur Sitkowski for a sack. Sitkowski got the ball off but was wrapped up by Carney immediately after it left his hands, and it fell incomplete.

The Illinois defense allowed 267 passing yards as Sitkowski went 29-for-46 with one touchdown, but more pressure from Carney and the defensive line helped force the young quarterback into three interceptions on the day.

Illinois came in with a plus-1.25 turnover margin per game, tied for tenth-best in the nation, and it boosted that with this game’s three interceptions.

Passing game has room for improvement

The Illinois coaching staff was glad to have graduate transfer Bush back running the offense, but it likely won’t be satisfied with the production in the passing game.

It’s not all on Bush.

His receivers are partly at fault for not making plays on some catchable passes — a dropped deep pass in the end zone by sophomore Carmoni Green comes to mind.

But at times throughout the game, Bush was a tad slow on his release and placement. Perhaps if he had gotten a bit more juice on the pass to Green, he would have had more separation from the defender and come down with what would have been a big touchdown before the half.

On another occasion, Bush evidently stared down Sam Mays on a route, and the Rutgers defender was able to close and break up the ensuing pass.

Some rust on Bush’s part is expected; he just missed significant time with an offense he is still developing chemistry with.

In the end, Bush brings the Illinois offense more versatility and tools than his true freshman counterpart M.J. Rivers. Bush has the clear advantage in the running game, and that helps open up the run-heavy Illini offense even more.

Illinois controlled the game on Saturday, and that’s not something that can often be said about this team in recent years. Rod Smith’s offense posted 419 total yards; granted, it came against a Rutgers offense that has struggled mightily on the way to a 1-5 start to the season.

But progress is progress, and that’s exactly what Smith’s group has shown so far this season.

Illinois averaged 6.8 yards per play and an impressive 7.7 yards per play on the ground. If it can do that against the likes of Purdue next week, and down the stretch as the season wears on, Illinois will be competitive in a lot of games.

Martin’s early interception gave Illinois a boost early before Del’Shawn Phillips added one, and then Nate Hobbs denied Rutgers near the goal line to seal the win late in the fourth quarter.

After giving up 387 rushing yards in the 63-24 loss to Penn State its last time out, Illinois only allowed 119 yards on the ground to Rutgers. Defending the run still seems to be an area of concern, especially when Illinois is going up against more talented offensive line units, but combined with that and only allowing one passing touchdown, the defense did a solid job overall on Saturday.

Since coming into camp and earning meaningful reps, Martin has done nothing but excel in the Illinois defense. Early on in the game, he made his presence known, jumping in front of a route to intercept quarterback Arthur Sitkowski’s pass.

When considering the early suspensions to key players in the secondary, Martin’s consistency has been a blessing for Hardy Nickerson’s defense.

Paired with six solo tackles and one assisted tackle, Martin has proven he is a capable Big Ten defender, and the staff has rewarded his performances with a significant role in the defense.