Volleyball falls to No. 5 Wisconsin 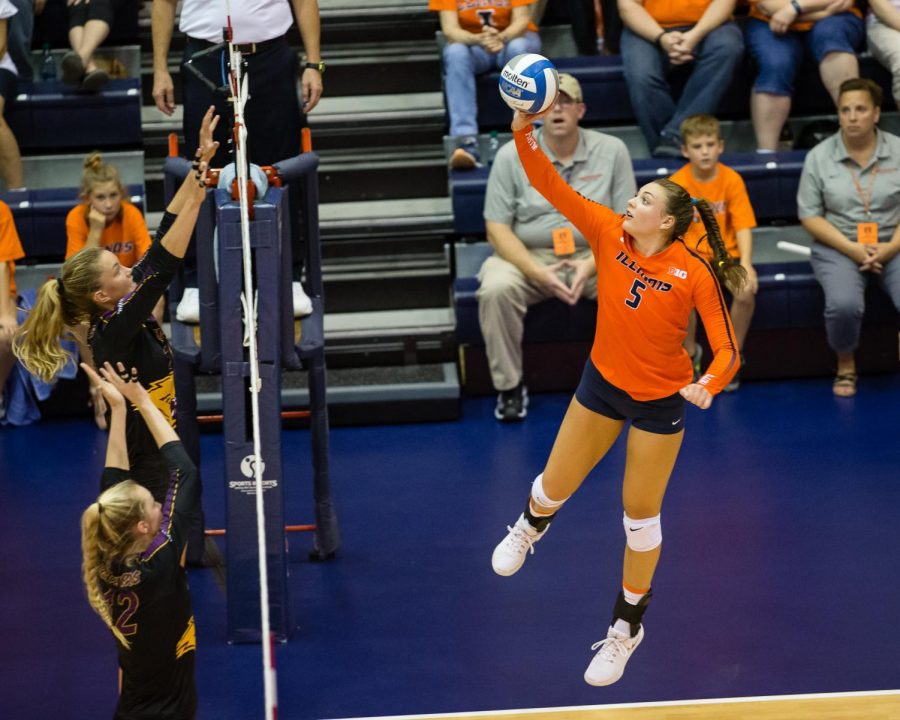 Illinois middle blocker Ali Bastianelli tips the ball during the match against Northern Iowa at Huff Hall on Sept. 14. The Illini take on No. 5 Wisconsin on Wednesday at 8 p.m.

The Illini faced off against fellow top-10 ranked Wisconsin Badgers and fell to the Badgers in four sets.

Illinois got off to a strong start in the first set, passing the ball effectively to allow six different players to land crucial kills against Wisconsin. Redshirt junior Beth Prince led the Illini in kills during the first set, racking up four in total. She was followed by juniors Jacqueline Quade and Ashlyn Fleming, who both got in three kills — which helped the Illini defeat the Badgers 25-21 in the first.

However, communication faltered after the first — a factor Quade was very much aware of throughout the night.

“I think the communication was pretty up and down; I think that is something that definitely could have been better tonight,” Quade said. “(It’s) definitely something we’re going to work on.”

After switching things up between sets, Wisconsin came out on top for the last three sets, taking advantage of Illinois’ lackluster communication and getting its conversions down.

Despite some shortcomings, head coach Chris Tamas doesn’t feel apprehensive about where his team is right now.

“We’re close. It’s just the matter of the one or two points that we’re not converting,” Tamas said. “I thought we took some really nice swings there, we just missed by an inch or two on a couple and that’s kind of the way it goes, but we’ve got to be better than that. We’ve got to make sure we’re handling the easy ones and we’re taking care of the points we can.”

But as the Big Ten season continues to escalate, the margin of error for the Illini will continue to shrink; a missed conversion or a serving error could mean the difference between having a winning record or finishing without one.

To avoid a disruption in Big Ten play, it’s going to take some critical players to step up and lead this Fighting Illini team — something senior Jordyn Poulter feels very passionate about.

“Somebody ultimately has to take charge; somebody has to be the loudest person; somebody has to be flailing their arms out to the side, letting everyone know that it’s their ball and that they want the ball,” Poulter said. “(There are) so many easy plays that we can fix just with someone talking.”