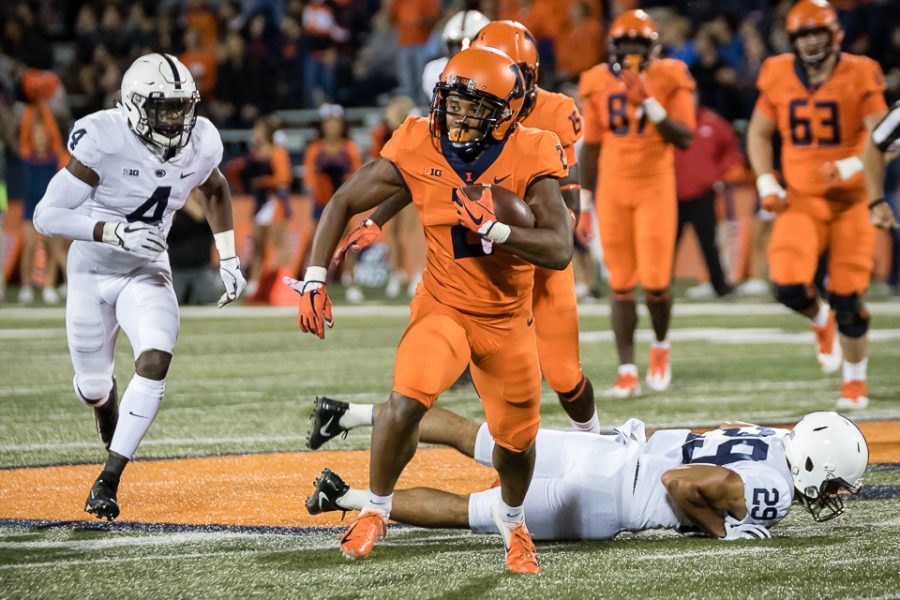 Illinois running back Reggie Corbin (2) carries the ball down the field during the game against Penn State at Memorial Stadium on Friday, Sept. 21, 2018. The Illini lost 63-24.

One year is a significant amount of time — just ask Illinois’ junior running back Reggie Corbin.

He was not leading Illinois football in rushing yards. In fact, he was riding the bench after falling out of favor in the previous offensive coordinator Garrick McGee’s system.

Under new offensive coordinator Rod Smith in 2018, it couldn’t be more different.

Corbin leads Illinois through five games with 464 rushing yards (92.8 per game) and has five touchdowns, including a 73-yard burst at Rutgers in last weekend’s 38-17 win.

“Reggie Corbin can make you miss in the open field,” said head coach Lovie Smith. “Reggie has had consistent play this year, and you just have to stay the course. Eventually, if you’re a good football player, you’ll get an opportunity to showcase your skill. That’s what Reggie has done.”

The Illini proceeded to stumble to 10 straight losses to close the year winless in the Big Ten and with one of the worst-rated offenses in the country.

At the end of the season, more than a dozen Illini transferred.

Leaving the program wasn’t what the Upper Marlboro, Maryland, native had in mind. Corbin saw how his situation was changing during spring practice after Rod was brought in.

“You know, it was tough,” Corbin said. “Of course, that’s tough for anybody. But being around Coach Rod and the new staff, I say the new staff, but the new energy of the staff, that whole Littyville energy is something completely different. Completely different guys than last year. Coach Ward, I see him in a new light. I’ve been able to see how he is on the day-to-day, I spend more time with those guys, so I get to know them a lot more.”

It has been widely reported Rod told the team he’d ‘meet them halfway,’ and he did. Rod adopted a lot of signals Illinois already used rather than instilling his own and kept the playbook as simple as possible to start.

Corbin and Rod’s offense has become a natural match, and the Illini rushing attack has been much improved because of it. Illinois comes in at No. 13 in the country in rushing offense, averaging 260.8 yards per game (third in the Big Ten) under Rod’s more up-tempo, spread schemes.

“(I’m) happy for him, but I kind of expected it, to be honest with you,” Rod said. “When I saw him in the spring, he was a little bit different than everybody we had, in my opinion. I noticed that off the bat. He’s one of the kids that can make kids miss in space, and that’s important, I think, to what I’m looking for in a running back.”

In the season-opener against Kent State, Corbin carried 10 times for 79 yards and two touchdowns, surpassing his 2017 haul in a single game.

Through the start of the season and Big Ten play, Illinois (3-2, 1-1 Big Ten Conference) has had more consistent offensive-line play. The team also has a more diverse rushing attack that features the running threat of grad-transfer quarterback AJ Bush (258 yards and two touchdowns on 44 attempts) and sophomore running back Mike Epstein (387 yards and three touchdowns on 57 carries).

“Last year was a tough year for everybody, but for (Corbin) to not get an opportunity last year, I know that was especially tough,” Allegretti said. “He’s an incredibly hard-working kid, a positive-energy guy. He did that all last season, even though it was hard for him. He wasn’t playing as much as he wanted to, but he was still a locker-room guy; he still busted his butt in the workouts. I think that probably drove him even more this year.”

Averaging 7.86 yards per carry so far this year, Corbin has put last year out of his mind. But those trying times changed him, and he believes he’s better for it after a year.

Corbin maintains a methodical, measured approach to lining up in the backfield, avoiding individual accolades. Every snap is a new snap. Every game is as important to win as the one before and the one after.

“It means nothing if you don’t do it every day,” Corbin said. “I’ve just got to come out here, hopefully I got better today than I was yesterday. I’ve got to do the same exact thing tomorrow, because if I don’t, then whatever happened week two, week three doesn’t even matter.”

The 5-foot-10, 200-pound back loves his relationship with quarterback AJ Bush. With Bush being a significant threat to break off on long runs of his own, this has made the Illinois offense much more unpredictable. Moreover, defenses have to play Bush honest and can’t key in as much on Corbin.

Bite hard on Corbin rushing up the middle, and Bush might beat opponents on the outside. Allow Corbin to get into open space, and he’ll make defenses pay like he did to Rutgers on his 73-yard touchdown.

Bush has even helped Corbin as a lead blocker. Against the Scarlet Knights, Corbin broke outside for a big gain, and Bush was right out in front of him helping clear the path of defenders.

As a primary beneficiary of Bush’s aggression and willingness to get upfield and block, Corbin loves what Bush brings to the table.

“When one of us is down, we pick each other up,” Corbin said. “But as I was running by him, I told him to move because he was going a little too slow. But it was good to see him going out there; he always does that. He doesn’t really carry himself like a quarterback, you know, like the typical quarterback. He kind of goes in there, he’s hard-nosed, he’ll try to lay someone out if he can.”

Though his junior season has been going drastically better than his sophomore campaign, Corbin is focused on results. He doesn’t value his own statistical production, improved as it is. It’s about getting tangible results on the gridiron.

“Just do whatever it takes to win; that’s all that matters,” Corbin said. “Because you can have all the stats in the world, but if you don’t win, it all means nothing.”