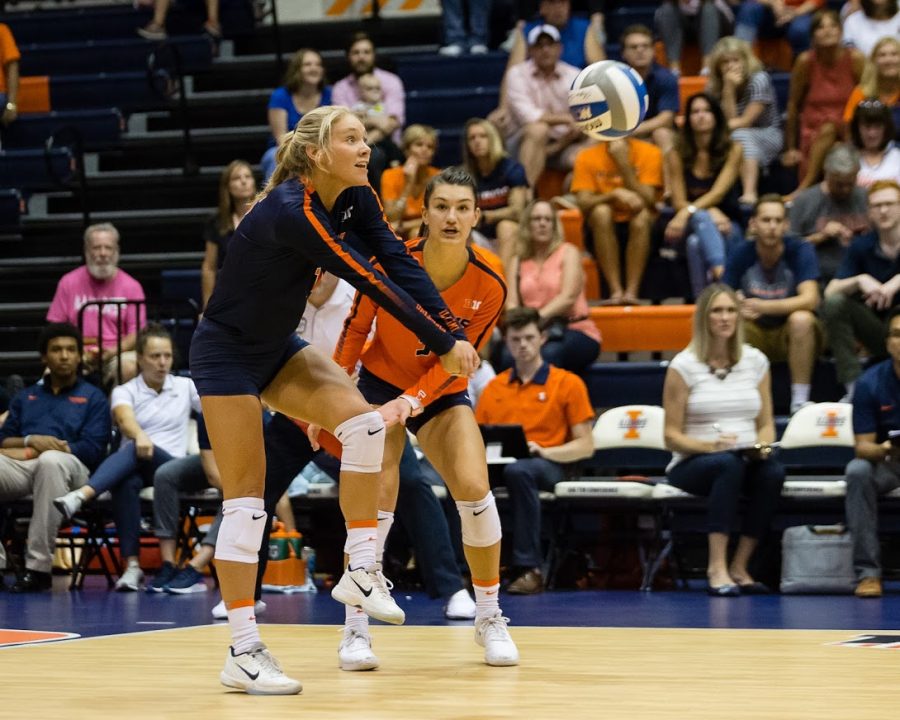 Illinois defensive specialist Morgan O'Brien (16) passes the ball during the match against Northern Iowa at Huff Hall on Friday, Sept. 14, 2018. The Illini won 3-0.

In the summer after Illinois volleyball’s first Sweet 16 berth under Chris Tamas, the Illini needed an assistant coach whose focus would be passing and defense.

Tamas knew who he wanted, bringing Alfred “Alfee” Reft on as the Illini’s second assistant coach.

“I just knew how good he was as a coach and so I just think he brings that passion and energy,” Tamas said. “He sees the game really well.”

For Reft, passing isn’t simple. He said that it isn’t just about where the ball goes in the x’s and o’s but being able to get it there under heat and pressure.

“We spend a lot of time on being able to pass the rock and use the tools they’ve learned when their feeling uncomfortable,” Reft said.

Senior setter Jordyn Poulter felt the changes from Reft right away, saying that his emphasis on defense has helped her approach and has helped her reach balls she couldn’t before.

Sophomore libero Morgan O’Brien also said that while Reft has emphasized the mental aspect of the game plenty, he’s helped her with some technical things as well.

Reft understands what makes for good defensive play. Like the other coaches for the Illini, he is a former player. He starred at the University of Hawaii after transferring from UC Santa Barbara as a libero, racking up a school record in the rally scoring era with 238 digs.

“Having some of the top minds in the world coach Chris (Tamas) and myself and even Jen (Tamas). We’ve had the luxury of really great mentors teach us as players and now as coaches,” Reft said. “It’s invaluable.”

Tamas said that the Team USA connections have helped the staff continue to grow their coaching skills, helping aid their player’s growth on the court.

In addition, the Illini’s staff has been able to grow their skills through technology. Every week at the same time the media is talking with players and coaches, Reft will be working with the front line players on their approaches and hitting using monitors to show the players just what he’s seeing.

“I tell the team that video doesn’t lie so you’re able to have that feedback and get some kinesthetic awareness to what you’re doing out there,” Tamas said.

Reft said anything that helps the players visualize what they’re doing outside of merely what the coaches say can be helpful for them, and junior standout Jacqueline Quade has noticed her improvements.

“Coaching is a skill set of itself, I don’t think you have to have played the game,” Tamas said. “But I’ll say again that to have that experience and know what moments feel like, that might be more important than teaching the skill.”

Tamas said he feels there is a lot of relatable experiences between this team and the coaching staff. And Poulter said that knowing the coaches have played at the competitive college level and even beyond on national teams helps the team during big situations.

However, for a coach like Reft, the impact on the team goes further than just the bumps, sets and spikes.

“He is a very caring person,” Poulter said, “He’s very light-hearted, but on the court, he takes what he does very seriously, that contrast is really fun for me to talk to him outside and inside the gym.”

On the other hand for Tamas, Reft fills a different position of need: karaoke wingman. Tamas said he plays the guitar, and Reft provides the vocals.

“We all go sing a round or two at karaoke,” Tamas said. “We really bonded and I couldn’t be happier with what we got going here.”