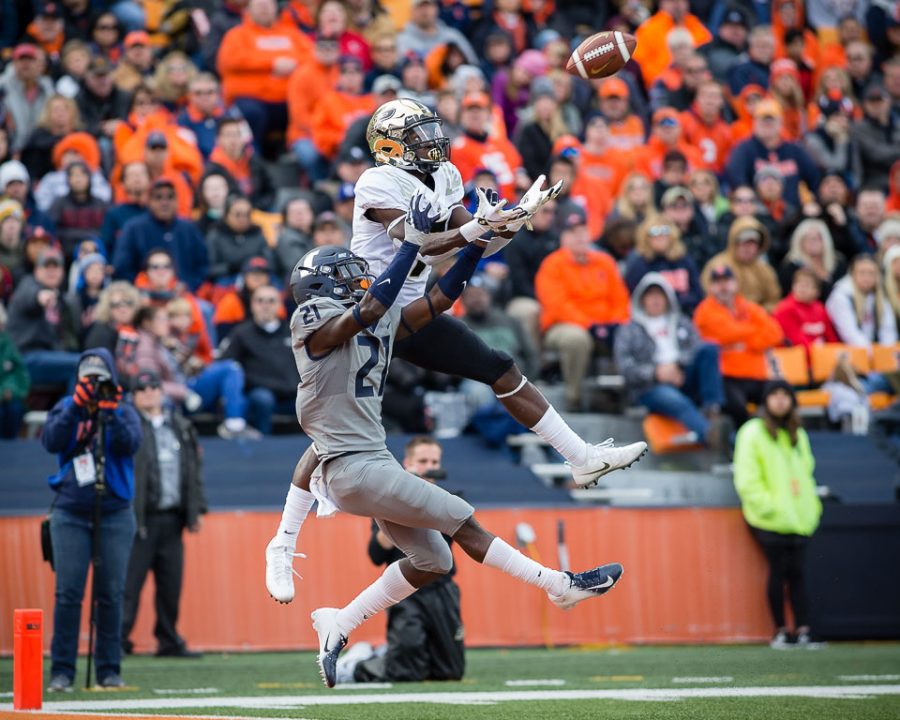 Purdue wide receiver Isaac Zico makes a touchdown catch over defensive back Jartavius Martin during the game against Purdue at Memorial Stadium on Saturday.

Illinois got on the board first against Purdue, as graduate transfer quarterback AJ Bush ran five yards for a touchdown early in the first quarter, but that was all the Illini had in the tank.

The Boilermakers roared back with 46 unanswered points, 29 of which came before the half, and they left Champaign with a 46-7 victory and the Purdue Cannon.

Conversely, Illinois sputtered offensively, only mustering 250 total yards of offense and 69 rushing yards. Bush went 12-for-25 with 170 yards and an interception, often having to scramble around in the backfield as the Purdue defensive line closed in around him.

Illinois ran the ball 31 times, averaging 2.2 yards per play — but Mike Epstein only got one handoff, and Reggie Corbin only had six carries on the day.

Head coach Lovie Smith admitted after the game that the staff relied on the passing game too heavily and didn’t give the backs enough work.

“We couldn’t get (Epstein) the ball,” Smith said. “In order for that to happen, you have to be able to establish drives. We didn’t have a lot of drives.”

After the second drive of the game, the Illini never touched the end zone again. When it looked like they would at least tack on three points to bridge the deficit, Chase McLaughlin missed a 38-yard field goal, his fourth miss in his last six attempts.

The Illini struggled in just about every aspect of execution.

“At the time, you try to get what you can,” Smith said. “In order to be able to get more rushes in, you have to be able to have some success running the football, without it just being the quarterback.”

Rather than citing a lack of execution, mental strength or other factors as reasons for the loss and margin of defeat, Smith laid the blame on the staff. The team was not well-prepared to play, he said.

“This wasn’t on the quarterback,” Smith said. “We thought we needed to keep fighting with that group out there. We thought that group gave us our best chance to have success.”

Corbin was openly expressive of his disappointment in the result, especially with it being the Homecoming game and a crowd of over 40,000 on hand to see the Illini, who entered the game with a 3-2 record.

The game was indicative of his time at Illinois.

“(The fans) gave us a chance, of course, like they always do every year,” Corbin said. “They give us one chance, and then for the past few years since I’ve been here, we’ve blown it.”

Freshman safety Sydney Brown, like his teammates and Smith, was visibly disappointed when addressing the result.

“Everybody is a little low,” Brown said. “We’re going to come back Monday, watch some film, get a good lift in and move on from there.”

Blough had lots of time to sit in the pocket and pick out his receivers, as the Illini only sacked him once and struggled to get pressure on him consistently, but the secondary was picked apart regularly by the Purdue gunslinger.

Two of his targets, receivers Isaac Zico and Rondale Moore had solid outings against the Illini. Zico caught five passes for 127 yards and two touchdowns, including a 42-yard play, and Moore had four receptions for 101 yards and one touchdown.

“As a secondary, we can’t let that happen,” Brown said. “Personally, myself, I can’t either. It’s unacceptable to me.”

From here, it only gets harder for the Illini — at least on paper. They travel to Wisconsin next week to face the No. 15 Badgers for their Homecoming.

Brown wants to see a better product on the field, though Illinois will be heavy underdogs.

“Personally, I don’t see any positives out of this (loss),” Brown said. “As a team, we’ve just got to get better. It just sucks, losing, and you can see it in the locker room. Everybody hates it. We want to move forward and start getting these W’s. Today was just not Illini football, what we’re used to playing.”