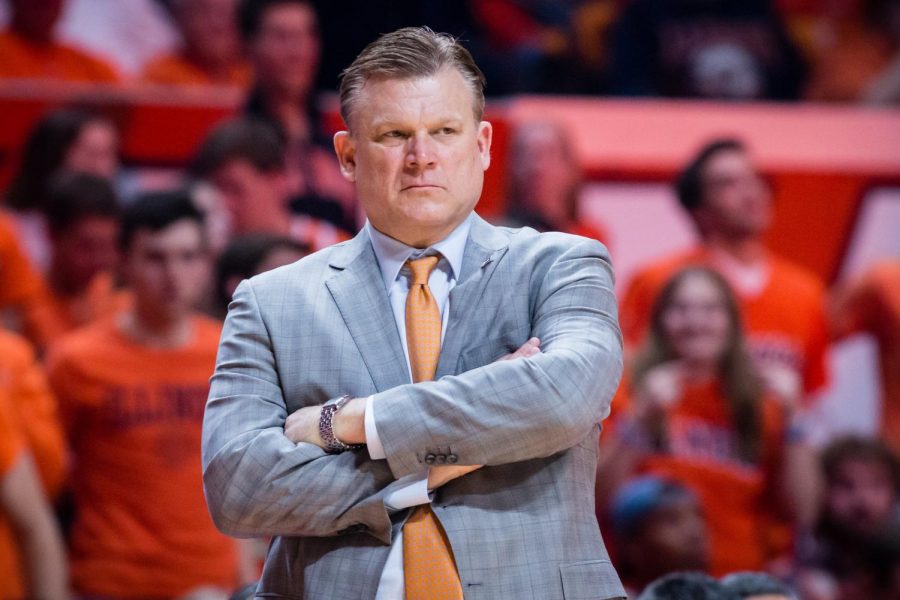 Illinois head coach Brad Underwood watches his team from the sideline during the game against Wisconsin at the State Farm Center on Feb. 8. Underwood and his team showed off their preparation in front of a crowd eager to get a look at the new team on Saturday at the Homecoming open practice.

For Brad Underwood and the Illinois men’s basketball team, the Homecoming open practice didn’t mean much on the court, but it did provide an audience at Ubben Saturday morning that was eager to see the new-look Illini.

In front of a crowd, Underwood ran his team on offense and defense, running drills for both sides for most of practice before ending with an extended live-ball period.

Among those in the crowd Saturday were former Illini players Stephen Bardo, Mike LaTulip and Brandon Paul, who took in the action from a courtside seat.

Paul is currently a free agent after being one of two active players from Illinois in the NBA last year along with Meyers Leonard. After averaging 16.6 points per game his senior year at Illinois, Paul went undrafted in the 2013 NBA draft. After stints in Russia, Spain and the D-League over the course of four years, Paul finally cracked an NBA roster.

Last year, Paul averaged 2.3 points in about nine minutes per game for the San Antonio Spurs in his NBA debut season. While the numbers were not as gaudy as in college, the impact of his time with the Spurs also runs off the court as well.

Paul said he learned a lot from the Spurs players and coaches about how to carry himself on and off the court. Playing with NBA legends like Manu Ginobili helped him learn how to be a professional athlete.

Paul also said he has fond memories of future Hall of Fame coach Gregg Popovich and got good feedback from the team about what he needed to improve in his game.

Underwood was excited about the visit and the learning opportunity for his young team.

“I told them, ‘You need to go talk to these guys,’” Underwood said. “Brandon’s a guy who paid all the dues to get on an NBA roster. When you have winners around, it becomes pretty exciting.”

While sophomore and freshman guards Trent Frazier and Ayo Dosunmu garner most of the headlines around Illinois basketball, junior college transfer Andres Feliz proved he was worthy of the praise the coaches have been giving him so far this year.

Underwood played Dosunmu and Frazier on the ‘blue’ team with Feliz as the point guard on the ‘orange’ team, and Feliz ran the show. The orange team won a number of the scored drills behind Feliz, who showed good anticipation and vision off the high- post handoffs and splits that are the foundation of Underwood’s motion offense.

“He’s got an understanding that goes beyond his years,” Underwood said. “In terms of leadership, he’s vocal; he always asks the right questions. It’s comforting as a coach.”

Feliz will likely see time on the court with Frazier or Dosumnu, or possibly both, as Underwood has said he may run three point-guard lineups during the year.

After losing all of their starting frontcourt players, the Illini will look toward two unproven youngsters to hold down the paint to start the year.

Even with the return from injuries of grad transfer big man Adonis De La Rosa seeming ahead of schedule, the Illini and Underwood still need Giorgi Bezhanishvili and Samba Kane to contribute their freshman seasons.

With the two on separate teams Saturday, both players’ strengths and weaknesses were shown.

Underwood got on both Kane and Bezhanishvili for a lack of rebounding all practice. He also had to stop practice to explain where he wanted Kane to go offensively.

Kane also had some misses from under the basket that had Frazier telling him to “just dunk it.”

However, Kane showed off the defensive length and versatility with a few nice blocks and demonstrated some agility switching onto guards off on-ball screens.

Kane missed the summer session of practices due to academic reasons, meaning he’s behind the rest of the team, but Underwood is pleased with where he’s at considering the circumstances.

“It’s not his fault he wasn’t here for eight weeks,” Underwood said. “You can see him still processing; you can’t play the game like that. He works really hard, but right now, everything is all sped up.”

De La Rosa is not yet cleared for contact in practice, but he is actively coaching Kane while he can’t be on the court.

After a number of plays, it was De La Rosa who would correct Kane.

“He’s a guy that’s been through all the battles, and he’s an experienced guy,” Underwood said. “He’s great at helping those guys with the little things.”