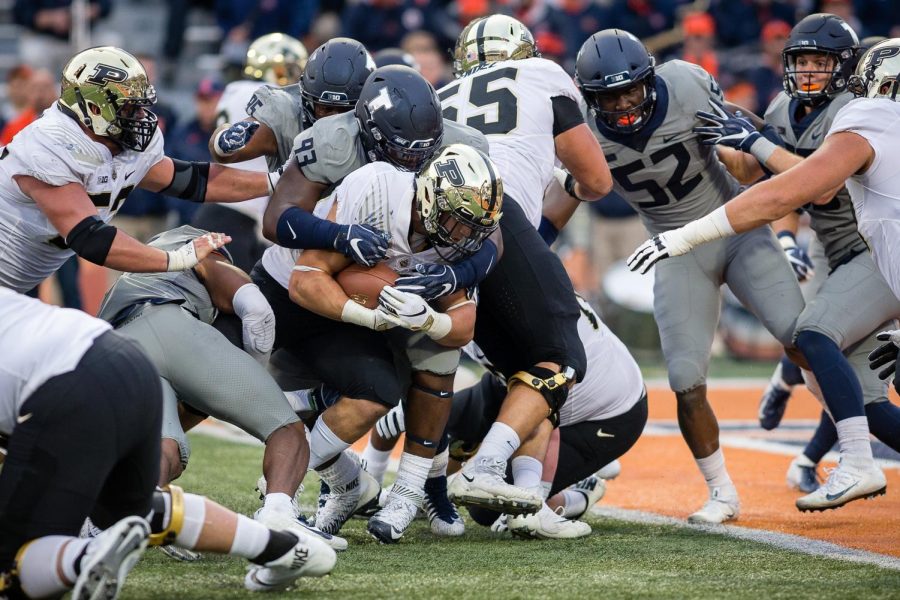 After the Illini were forced to punt on their opening possession, the defense put up the best drive it would have all game. A forced Purdue punt set the Illini up for an exciting, yet deceiving, first score of the game.

AJ Bush threw what was possibly his best pass of the season during a half in which he looked utterly confused. The perfectly placed ball landed in the hands of Reggie Corbin as he flew down the sideline to get Illinois within striking distance.

The Bush touchdown that followed appeared to provide a spark the Illini needed, but Purdue quickly blew it out.

It didn’t take long for the defense to look completely lost with a glaring lack of leadership.

Purdue quarterback David Blough got the time he needed in the pocket to hit his receivers down the field. In addition, the speedy receiving duo of Rondale Moore and Isaac Zico thrashed the Illini secondary, getting open almost at will.

The difference in arm strength between Blough and Bush was all too noticeable.

The heavy doses of passing employed even when the Illini rushing attack has been one of the strongest in the Big Ten this season made little sense. And the defensive woes stretch far past this one game.

In the interest of honesty, Illinois wasn’t going to be able to make substantial adjustments during halftime.

The team headed into the locker room with a scroll full of problems, and 20 minutes isn’t enough time to address every square inch of your football team.

If anything, all the team could do was come out with a newfound energy, a will to win. Instead, the Illini defense came out and handed Purdue another score. Two atrocious offside penalties gave the Boilermakers new life on their first drive of the half. Then, it felt like a vacuum flew over the stadium to suck the energy out of Memorial Stadium.

A full student section quickly plummeted in capacity. Not too far after the remainder of the stadium followed.

Ironically, just then is when the press box announcer decided to call out the attendance: “41,966.”

While at its peak the game may have reached that point, by the third quarter it was practically half that.

The two quarters left to play felt meaningless. The Illini played with little enthusiasm and all sides of the ball struggled to make a play.

The sidelines looked colder than the fan’s in the stands, the energy lacked and the players just looked like they wanted it to be over.

AJ Bush put on his worst showing of the year, struggling to execute on his designed run plays and throwing the ball behind nearly every receiver. In addition, the grad-transfer quarterback had his first interception in orange and blue with an incredibly questionably thrown ball.

Overall, once the clock ran out, Memorial Stadium needed that same vacuum to clean up the mess the Illini football team left behind.

If Illinois wanted to win this game, it needed to minimize mistakes and match the big play offense of Purdue.

The Illini did the exact opposite.

The only thing possibly more frustrating than watching the performance on the field was hearing the confusion expressed by the players and coaches afterward.

The postgame press conference with Lovie Smith offered few answers as to what brought on such a weak performance. The coach responded with some version of the fact that the team played poorly all around and needs to come to practice with a clear mind to every question.

When talking to players, Reggie Corbin and AJ Bush both offered up a sighful “I don’t know” when asked about the problems with consistency and keeping the team energy high.

“At this point, I think it’s for the coaches to figure out because we haven’t figured it out yet,” Corbin said. “But I believe in our staff. I know they will figure it out by tomorrow.”

If the postgame questioning proved anything, it’s that a lot of confusion rests within this team at the moment.

Plenty of fans out tailgating before the #Illini look for a homecoming win over Purdue.

Bush goes 5-yards to the end zone and puts Illinois on top.

Reggie and Bush continuing to be dynamic for this team. #Illini 7 Purdue 0
8:07 to go in the 1st quarter

Purdue leads the #Illini 29-7 at halftime.

– How/why has Mike Epstein not carried the ball even ONCE?

– M.J. Rivers deserves a shot to lead this offense in the second half

– This defense has been atrocious. Open receivers everywhere, not enough pass rush

We regret to inform you the #Illini are bad again. Purdue scores another touchdown before the end of the half. Tried to go for two but fail. Purdue up 29-7 going into halftime

The student section went from 100% capacity to about 40% after the half.

Goodbye #Illini student section. It was an honor to see you full for nearly an entire half

The game has felt well over since the closing minutes of the 2nd quarter.

46-7. Purdue has scored 46 unanswered points on the #Illini

I was concerned about this game for AJ Bush.

Games against Kent State and Rutgers just didn't do it for me. Today's game was big for him and he just hasn't shown up. #Illini