Purdue dominates Illinois in every aspect 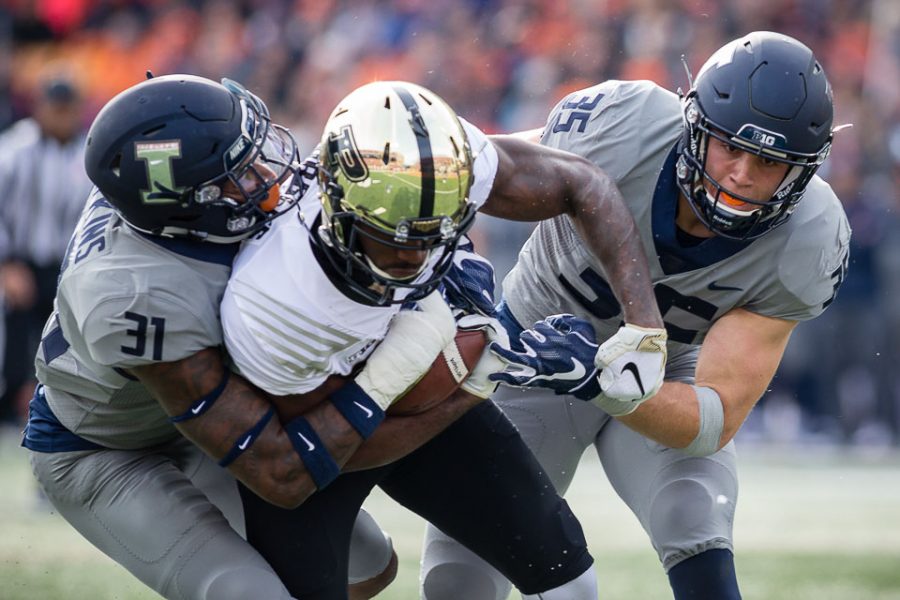 Illinois defensive back Cameron Watkins (left) and linebacker Jake Hansen (right) make a tackle during the game against Purdue at Memorial Stadium on Saturday.

On Homecoming Saturday, Purdue outclassed Illinois across the board of the game. The result was a 46-7 loss in front of a packed student section. The Illini have dropped to 3-3 on the season with a 1-2 record in Big Ten play.

Sophomore running back Mike Epstein had one carry against the Boilermakers, junior Reggie Corbin had six and quarterback AJ Bush carried the ball 20 times for 24 yards.

Offensive coordinator Rod Smith admitted at Monday’s press conference he allowed Purdue to dictate the way Illinois called the game offensively. Smith also admitted he tried to get the running game going early but backed off too quickly and resorted to the passing game when his team couldn’t establish a rhythm.

On many of his option reads, Purdue forced Bush to tuck the ball and run. The grad-transfer went up the middle regularly and was immediately met by a number of Boilermaker defenders. Bush’s decision-making in these plays was a major reason why Epstein and Corbin received so little action.

“Their ends were squeezing quite a bit, making AJ keep the ball on some of the run stuff,” Smith said. “There were a couple reads where AJ could’ve handed the ball off, where Mike would’ve been the recipient of some carries. I’ve got to do a better job, I think, of making sure those guys touch it. Don’t let a defense dictate who carries the ball, who doesn’t. Part of that was on me.”

Miscues at quarterback, on offensive line

Objectively, Bush had his worst game of the year against Purdue.

The quarterback went 12-for-25, passing for 170 yards as Illinois attempted to establish some sort of offensive momentum.

Head coach Lovie Smith noted in his press conference when a team plays poorly, it’s usually the head coach who has to answer for it, then the offensive coordinator, and then the starting quarterback.

Both Lovie and Rod noted the receivers dropped a number of balls, and the team didn’t offer Bush much help. However, the two pointed out at Monday’s press conference the quarterback needs to perform better.

“What we like for AJ to do is, just like we talk about with everybody else, is go back to work,” Lovie said. “AJ threw some good balls, we dropped some passes, but that’s just the life of the quarterback.”

Rod also pointed to the play of the offensive line, which gave up three sacks to Purdue. It forced Bush to go on the run more and kept him from having the time to make solid reads or to get Corbin and Epstein the ball.

“We need locking, blocking, either inside or on the perimeter,” Rod said. “That’s not always a bad thing when (Bush) is pulling and running. We missed a couple of things post-snap with the quarterback that would’ve helped.”

The biggest play of the game for the Illini came early on when Bush hit Corbin for a 52-yard reception in the first quarter to set up the only score of the game. It was a play-action set, and Bush hit Corbin on the side of the field, who broke away, nearly scoring.

Not much else went well offensively for Illinois in the rest of the contest.

“Give (Purdue) credit; they did a good job of really stacking the box and taking away our guys,” Rod said. “We tried to run a little bit early, not a lot of success. Thought we’d try to throw it to loosen it up a bit, try to open. We hit a couple big plays early on.”

The Illini defense — from a makeshift secondary to the linebackers to the defensive line — was bested in all aspects.

Receivers Isaac Zico and Rondale Moore both found ways to get open throughout the game, as Zico caught five passes for 127 yards and two touchdowns, including a 42-yard score.

Moore, with an impressive showing, caught four balls for 101 yards, including a 60-yard touchdown.

“Way too many explosive plays, that’s the bottom line,” said defensive coordinator Hardy Nickerson. “Better coverage on the back end and at the same time, being more solid, more sound in the run game.”

Defensive end Bobby Roundtree was disappointed with his own play. He didn’t hold back in his assessment of his game.

“For me, I take it personally; I’ve got to pick it up,” Roundtree said. “I haven’t shown up these past two weeks; I just keep thinking about what I’ve got to do next to be more of a help to the team.”

Roundtree said there was a host of communication issues throughout the defense that helped Purdue capitalize for big plays.

Illinois allowed 227 yards on the ground on 44 rush attempts, letting D.J. Knox break out for a 33-yard gain and Markell Jones get loose for a 23-yard score.

Nickerson stressed the importance of defending the run better, especially next game against a Wisconsin team that is known for aggressively and openly running the football down opponents’ throats.

“It just comes down to getting those run fits with the different personnel group,” Nickerson said. “Your spread offenses have more receivers on the field; you have more defensive backs on the field. We’ll add another linebacker to the field, (Dele Harding), and look to fit those things up pretty well.”