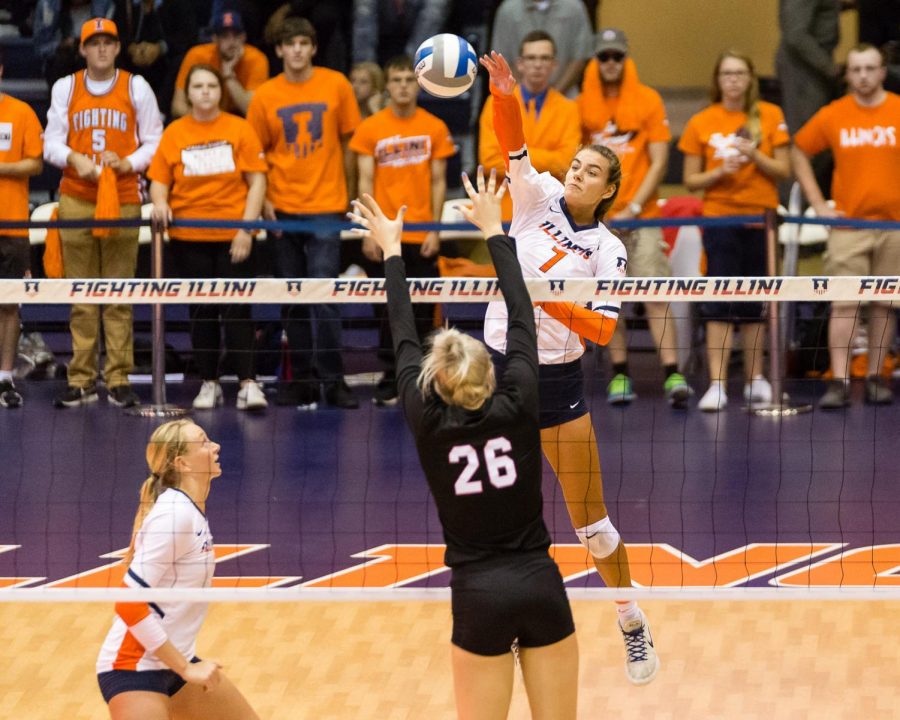 Illinois outside hitter Jacqueline Quade hits the ball from the back row during the match against Nebraska at Huff Hall on Sept. 29. The Illini lost 3-1.

When a program is as prominent as No. 7 Illinois volleyball is in 2018, it’s hard to pick any one player who stands out.

But week after week, one name continues to rise to the top of the box score — junior Jacqueline Quade has played a crucial role throughout the 2018 volleyball season. Whether it’s picking up an ace at the serving line, which Quade has done 19 times this season, or grabbing a personal-best 26 kills against Wisconsin on Saturday, she proves set after set she’s productive anywhere on the court.

Head coach Chris Tamas points out Quade’s flexibility as a hitter is one aspect of her game that sets her apart.

“She hits the ball from a high spot, and she’s able to move the ball around a little bit,” Tamas said. “We call that hitting with range, and when you have a range like that, it’s really tough for defenders to kind of sit in one spot and wait for you defensively. So if she’s able to continue with her success, she’s going to have to be able to do that and still add in more shots to her game.”

Tamas hasn’t been the only one taking notice. Quade continues to improve while also developing new skills.

Senior Jordyn Poulter spent a lot of time on the court with Quade during the 2017 season — Poulter and Quade were the only two players to start for all 34 matches, playing in all 127 sets.

And Poulter has no doubt Quade can continue to be a reliable force — a reality that can make her job as setter go smoothly regardless of the competition.

“I think she can go as far as she wants to, really. I think that she can be as good as she allows herself to be, which is exciting for me to have her as that consistent piece,” Poulter said. “She took some really courageous swings and big moments this weekend, and I think her having that confidence of knowing that she can do that in any situation should be exciting for her, and it’s exciting for me because it just solidifies that trust a little more.”

During a season filled with set- , match- , team- and career-highs, it’s no wonder Poulter continues to feel at ease with Quade on the court. Whether it’s posting back-to-back 22-kill performances against Colorado all the way back in August, snagging her sixth career double-double on the road at Indiana or walking away with 22 kills after facing off against former national champion Nebraska, Quade has stayed consistent even when the odds were against her team.

The national recognition and noteworthy performances may be something to be excited about, but for the seasoned veteran, there’s always more to work on.

“There’s always so much room for improvement,” Quade said. “As far as myself and talking to the coaching staff, there’s still so much that we want to work on, so it’s pretty exciting to keep growing as a player even if it’s not a huge jump, even if it’s just something very marginal. I’m pretty excited to keep working on stuff.”