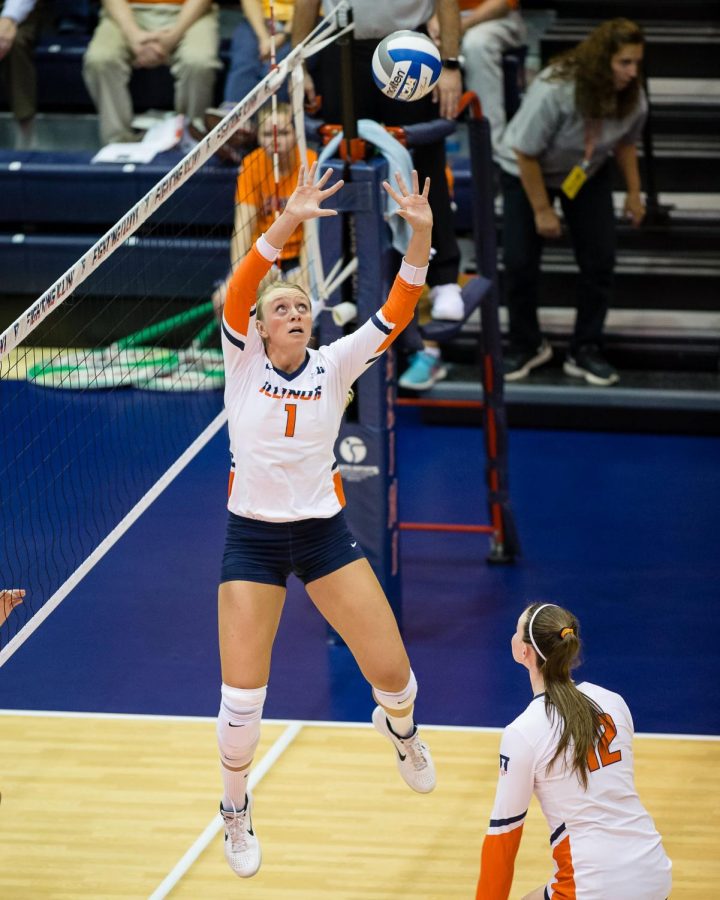 No. 7 Illinois hosted both Michigan State and No. 13 Michigan, beating both Big Ten contenders in three and five sets, respectively.

Friday’s match against Michigan was a close battle.

Going into the weekend, both teams had similar conference and overall records, and the similarities showed throughout the night. By the time the fifth set began, there had already been 18 lead changes — and two more in the fifth, for a grand total of 20 lead changes throughout the game. But even more reflective of the battle between Illinois and Michigan is the number of tie scores — the two ranked teams found themselves tied 39 times on Friday night.

But when the Illini are locked into intense competition, head coach Chris Tamas expects his team to put what they have practiced into action.

“It’s tough and we’re on them in practice about these types of situations, and that’s just the way we train and just making sure we’re able to take those swings in those moments when it is tight,” Tamas said. “You’ve got to be able to be brave and be able to take a point and trust your teammates that they’re back there, they’re ready to pick you up and make sure that they’re doing their job too.”

Senior Ali Bastianelli had a standout night, not only picking up a career-high 19 kills against the Wolverines but also becoming the Big Ten Conference career block-assists leader with a total of 618 block assists.

Bastianelli said she couldn’t have earned the honor without a strong foundation.

“It felt really good, but knowing I couldn’t have done that without my teammates the past four years, it means a lot that I have that ability with the teammates around me and that they’re so excited for me,” Bastianelli said. “The coaches do a good job of pushing me every day in practice to get better and they do that with everyone.”

The Illini prepared to face off against a young Spartan squad on Saturday. While Michigan State looks different from last year’s seasoned team, the remainder of last year’s Sweet 16 match-up couldn’t be ignored. At the end of a quick night, Illinois emerged on top and swept Michigan State in three sets.

Junior Jacqueline Quade led the Illini with 14 kills. She was followed by Bastianelli and redshirt junior Beth Prince, who joined Quade in the double digits. Bastianelli had 11 kills by the end of the night while Prince had 10.

It was a consistent evening for senior Jordyn Poulter as well; after moving up to third place in Illinois program history with 4,493 career assists on Friday, she added 43 more to her record on Saturday.

Although a sweep can be exciting and refreshing, after five sets the night before, Poulter knew that Saturday’s match could come with its own set of battles.

“I think the mentality was a little more difficult,” Poulter said. “It’s easier, I feel like, to keep the focus when you’re in a battle and trying to grind every point like we did with Michigan. It’s just kind of, how do we maintain our level of play that we want to have.”

Saturday was also a special night for the Illini because it was their annual Pink Match in honor of Breast Cancer Awareness Month.

It’s a night that means a great deal to the team and coaching staff, many of whom have personal connections to the fight against breast cancer.

“Every time that I get to wear pink in this month I just think of all the strong women who have overcome this battle and continue to be advocates and be survivors,” Poulter said. “I’m happy that we celebrate this collectively.”