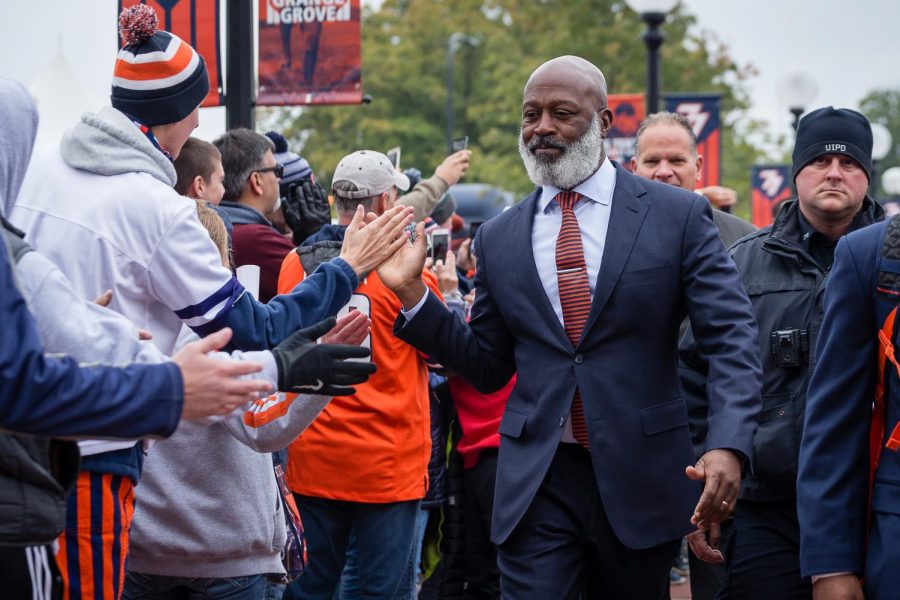 Illinois head coach Lovie Smith shakes hands with fans along Grange Grove before the game against Purdue at Memorial Stadium on Saturday, Oct. 13, 2018.

The list of the top-10 college football’s highest-paid coaches features one thing that doesn’t look like the others.

Among the sea of seasoned — and winningest — coaches on the nation’s highest paid, swims Illinois head football coach Lovie Smith, who’s bound in a four-way tie for the No. 10 spot on the list under his six-year $21 million contract with the University. And despite Smith’s NFL experience, he sticks out like a sore thumb among all the other coaches on the list.

Despite his NFL resume, in his three years at Illinois Smith has gone 8-22, while other household names like Ohio State’s Urban Meyers and Michigan’s Jim Harbaugh have years accompanied by dozens of wins under their belts. Smith still has the third-highest pay grade in the Big Ten but lacks the winning record many of the other coaches making the most money in college football have.

Smith holds one of the worst records in the Big Ten at 1-3 and has gone 3-4 overall this season. Compared to his two previous years overseeing the Illini, this is an improvement.

While Smith is making a few million less than Auburn’s Gus Malzahn and Georgia’s Kirby Smart, he’s still making more than Iowa’s head coach Kirk Ferentz, who has not only been with the Hawkeyes for 20 seasons, but has also led them to victories in seven of their 15 bowl games, and Penn State’s James Franklin, who’s also driven the Nittany Lions to a bowl game every season during his tenure.

Topping off the list is Alabama football head coach Nick Saban, who made over $11.1 million last season, including a $4 million signing bonus. His annual salary, before bonuses, has been marked just above $8 million. But that gargantuan payday didn’t happen overnight. It took 11 years and a record of 127-20 to slingshot Saban into the top slot.

According to USA Today, Meyers and Harbaugh make up the next two spots, respectively, and first-year Texas A&M head coach Jimbo Fisher sits in third collecting $7.5 million this season.

While Smith is collecting nearly half of what Saban is, he’s still an oddity among everyone else earning above $5 million.

But Smith isn’t only among college football’s highest paid, he’s the also the highest paid public employee in Illinois.

Because the University of Illinois is a public institution, Smith is recognized as a “state employee,” and the highest paid employee at the school. After Smith, the second-highest-paid state employee is head men’s basketball coach Brad Underwood who’s set to collect $2.85 million this year. The next highest-paid coach on the Illinois football staff is offensive coordinator Rod Smith at $500,000, however, former assistant coach Hardy Nickerson earned $650,000 a year before resigning mid-season.