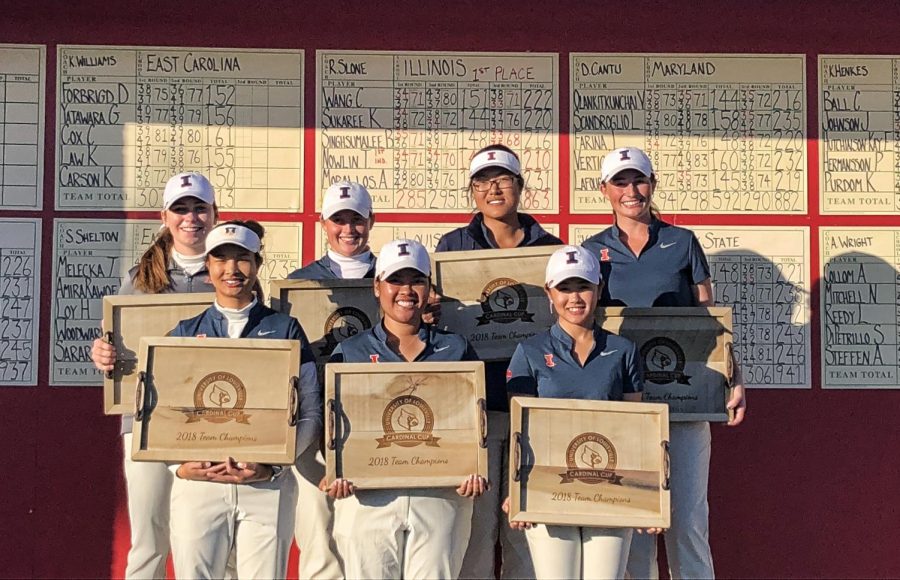 The women’s golf team poses after taking home first place at the Cardinal Cup Saturday in Louisville, Kentucky. The team will advance to the NCAA finals for the first time in University history.

On Saturday, the Illinois women’s golf team traveled to Kentucky to compete in the annual Cardinal Cup, hosted by the University of Louisville. At their fourth-consecutive appearance in the tournament, the Illini finished at the top of the 14-team field with a score of 863 (-1).

Illinois took an early lead in the first round on Saturday and never let up, finishing 19 strokes ahead of runner-up and Big Ten opponent Maryland. The team also out-paced another conference opponent, Wisconsin, and last year’s Cardinal Cup champion, Louisville.

While high winds on Saturday caused many teams to struggle early-on, the Illini were able to keep control of their game. Illinois finished the first round three-under-par, giving them an advantage going into the rest of the tournament.

“(Saturday), we had some challenging conditions, and I think that was a huge step forward for us,” head coach Renee Slone said. “We learned to adapt to changing conditions and remained mentally strong.”

With their strong mentality, three Illini finished in the top-10 of the individual scoreboard. Junior Tristyn Nowlin led the team, securing the individual title as well as her first career win. The Richmond, Kentucky native posted an overall score of 210 (-6), the only individual under-par finish of the tournament. Nowlin is now tied for the third-lowest individual 54-hole score in program history.

“(The win) feels surreal at this point,” Nowlin said. “I like this tournament a lot and this course. I’ve had trouble with this tournament in the past, and I have played it plenty of times. Last year in the final round, I felt like I had conquered it, so I came in with a lot of confidence this year, and I came out with a win.”

Despite coming into the tournament feeling under the weather, Nowlin kept her game simple and took every hole one shot at a time. In practices, Nowlin has been focusing on her short game and putting — two aspects of her game that she felt came alive during the Cardinal Cup.

“I think there were only two times I didn’t get the ball up and down if I missed a green, and I made a good amount of putts,” Nowlin said. “That’s really what I’ve been working on, so to see it in the results is really good.”

Nowlin felt being in her home-state made the victory even more special. An emotional moment came at the end of the final round for Nowlin when she saw her six-shot lead on the scoreboard, knowing her parents were in the crowd watching the final shots.

Behind Nowlin was senior Bing Singhsumalee, earning a career-best finish by tying for second place. The veteran posted an even-par score of 216, battling back near the top of the leaderboard after finishing 3-over-par on Saturday. Singhsumalee had a notable third round, posting eight birdies leading to her season-best score of 68 (-4).

Also performing for the Illini was freshman Kornkamol Sukaree, posting a four-over-par score to tie for eighth. Staying consistent, Sukaree shot two even-par rounds on Saturday after posting an eagle in the first round. Sukaree’s putting abilities in the first round sparked her confidence in tough conditions going forward.

A constant force for the Illini, freshman Crystal Wang, secured a spot in the top-15 by shooting a 71 (-1) in the first and third round. After struggling in the second round, Wang posted four birdies in the final 18 holes to tie for 13th.

Rounding out the Illini lineup was sophomore Ali Morallos, climbing five spots on Sunday to tie for 31st. Morallos shot a 75 (+3) in the final round, posting a total of five birdies overall.

Competing as individuals, freshmen duo Katie Hallinan and Lauren Nay tied for 56th and 71st, respectively. On Sunday, Hallinan jumped 12 spots after posting four birdies in the third round and a one-under-par score. The last two tournaments were learning experiences for both freshmen, and Hallinan is embracing the change to college-level golf.

“College golf is a lot different than junior golf in the best ways possible,” Hallinan said. “Just having a great team of people and coaches around me all the time and the support of people watching all the time has been different. But it has all been amazing, and I have loved it.”

The Illini victory at the Cardinal Cup gives the team its second win of the season — the first time the program has earned two fall-season titles since 2014. Illinois’ ability to perform well in tough conditions has increased the team’s momentum moving forward.

“This win for us was really good especially being the only team under-par,” Nowlin said. “The first day, we were able to persevere through the tough conditions, and there was a lot of growth that first day. That is such a big confidence booster for us even heading into the spring to know we can handle those conditions and come out with a win.”

Illinois will finish up their fall season in Dallas, Texas on Oct. 29-30 at the Trinity Forest Invitational.