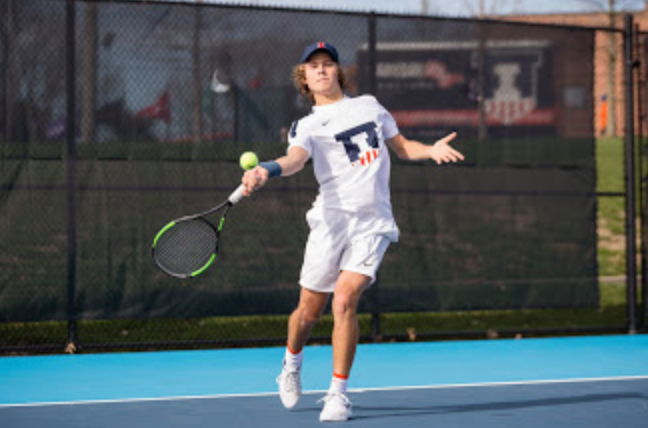 Over the weekend, the Illinois men’s tennis team competed in the ITA Midwest Regional at Notre Dame University and had its best showing of the year, punctuated by junior Aleks Kovacevic winning the men’s Singles Title.

While Kovacevic and sophomore Caleb Chakravarthi struggled in doubles play, losing 8-5 in the round of 32, Kovacevic thrived in singles play.  He started his weekend by beating Lenhard Haupt from Western Michigan and then went on to defeat four-straight Big Ten opponents. Two of those wins came against James Trotter and Tim Seibert, both members of the Ohio State University team.

“I love beating the Buckeyes,” Kovacevic said. “Big Ten opponents are clearly good, and the fact that I might see these same guys in (the spring) season gives me confidence that I can beat them.”

In the finals, Kovacevic faced fellow teammate, and roommate, junior Zeke Clark.  Similarly to Kovacevic, Clark had to beat multiple Big Ten opponents to advance to the finals, most notably the No. 1 seed in the tournament: the Buckeye’s Martin Joyce.  Joyce and Clark are no strangers as they grew up playing in many of the same tournaments, but it was the first time the two were ever matched up against each other.

“He’s got a really really good game,” Clark said. “He plays some big boy tennis. I knew I had to be ready to fight off lots of big serves.  He also has a great net game, so I knew he would attack as much as possible. I feel I did a good job of holding my ground and not giving up the baseline.”

The final between the two Illini was as entertaining as advertised.  Both players were showing emotion on the court, and they were fighting for every point.  Kovacevic won the first set 6-4, but Clark would not give up as he took the second set 7-5.  Kovacevic would prevail, winning the third set 6-3 and taking home the singles championship. Beating a teammate is special, but this victory had a little bit extra added to it.

“It’s funny, we got lunch together and drove back together after the match,” Kovacevic said.

A final between roommates may have been the biggest headline from the tournament, but there were also some other Illini that competed.

Freshman Keenan Mayo struggled in singles play, losing his first game to Nico Mostardi of Cleveland State, but played well in doubles.  Mayo played alongside Clark and they formed a nice complementary pair. The two managed to win two games, making it to the quarterfinals before Mayo was forced to retire his match due to injury.

“Caleb is making some great progress, and he’s right there to make a big jump,” said head coach Brad Dancer.

The event was one of the most successful for Illini in recent history, and the Illini will look to build off of it when they head to Ann Arbor for the Big Ten Singles and Doubles Championships.