Notes and grades from Illinois’ loss at Maryland 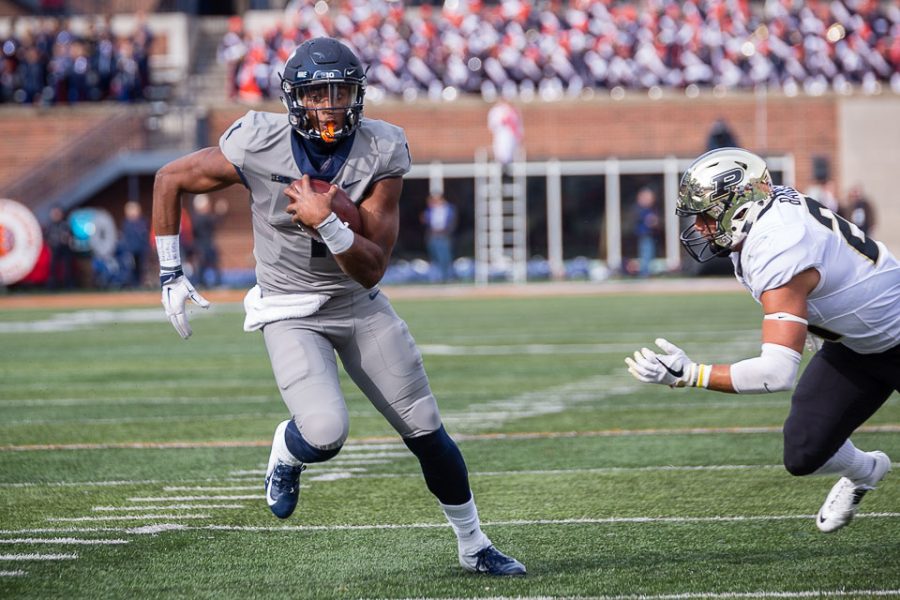 Illinois quarterback AJ Bush (1) rushes the ball for a touchdown during the game against Purdue at Memorial Stadium on Saturday, Oct. 13, 2018.

Reggie Corbin showed up for the Illini, and that’s about it. Corbin put up a career-best 155 yards on 18 carries and ran for a 69-yard touchdown in the third quarter, though the game was already out of reach at that point.

The game marked a rare return home for Corbin, who went to high school in nearby Washington, D.C., and lives about 30 minutes away from Maryland’s campus in Upper Marlboro.

Corbin has been a key figure for the Illinois offense this season, after only rushing for 78 yards in total in 2017. He’s had three games with over 100 yards — he went for 137 yards against Rutgers on Oct. 6 and 100 at Wisconsin Oct. 20.  Corbin also had a catch and run for 25 yards.

The offense put up 33 points, but it was by no means a cohesive unit on Saturday. The receivers had far too many dropped passes, and it killed the Illini.

Chase McLaughlin had four first-half field goals, but the team needed touchdowns to keep up with Maryland’s explosive offense.

Before M.J. Rivers went down with a probable concussion in the second quarter, he was struggling to get any sort of rhythm going with his receivers. He only completed three of his 13 pass attempts, totaling a measly 45 yards.

When Bush came in, he completed two passes — one on fourth and one — before throwing a momentum-killing interception in the red zone. He ended up totaling 216 yards through the air, thanks to two long-yard after-catch runs for receiver Dominic Stampley, and went 11-for-19.

With Mike Epstein out, Rivers in concussion protocol and questions surrounding Bush’s accuracy and decision-making, the offense has a lot to do before it can compete with Big Ten defenses.

The Illini need to stop giving up so many big plays.

Maryland had long gains all game, bursting out for eight touchdowns of 25 yards or more.

Defensive coordinator Hardy Nickerson and head coach Lovie Smith need to take a hard look at this game film and see how, if at all, the unit can shore itself up and execute better next week. They may need to scrap their approach to defense entirely, but it’s tough to do all that midseason at this point.

The Illini did put up points, but it wasn’t enough and it wasn’t soon enough, with a lot of the scoring coming at the end of the game in garbage time.

AJ Bush took over and threw another interception, which came on a play where he practically alerted the defense to where he was throwing, staring down his target over the middle of the field.

When a team scores 33 points and averages 7.4 yards per play along the way to 493 total yards on the day, it usually wins. But this offense didn’t do it until it was too late — this score looks closer than the game was.

Maryland had 712 yards of total offense.

Averaging 10.3 yards per play from scrimmage, the Terps did anything they wanted to the Illini. They burst out for big runs on the outside all day, with the Illinois defensive players repeatedly taking bad angles and being too slow to keep up.

Hardy Nickerson and Co. got burned time after time in one-on-one coverage on virtually every part of the field.

On one play late in the game, Sydney Brown was manhandled by a Maryland receiver on the way into the end zone.

For coming into the game after an injury, AJ Bush did alright on Saturday.

However, he didn’t do much to help his case for why he should be the No. 1 quarterback. Completing just over half of his passing attempts isn’t good enough, though again, the receivers are expected to step up and help the quarterbacks.

Bush’s throws are simply inconsistent. It’s hard to tell if he’s going to zip one right to a receiver’s chest, badly mistime his release and over- or under-throw or tuck it and run into a gang of defenders.

The Illini need improvement in all areas of the field, but the quarterback position remains a major question mark for this team.