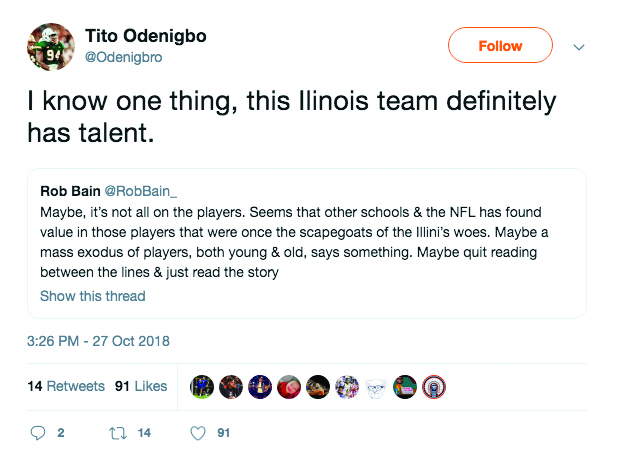 Illinois true-freshman quarterback Coran Taylor believes there is a personnel move the Illini need to make. In the second quarter of what would be a 63-33 loss at Maryland, Taylor took to Twitter for a wise proclamation: “You know I’m ready like spaghetti,” he tweeted.

Rather than dissecting the complexity of the tweet, let’s just believe Taylor was speaking toward Illinois’ recent quarterback faults. Grad-transfer AJ Bush was benched in Illinois’ matchup against Wisconsin and appeared to lose the starting job to Taylor’s fellow true-freshman M.J. Rivers. However, when Rivers was taken out of Saturday’s game due to a concussion, Bush came back in for the Illini and Taylor took to Twitter.

While some jumped to the quick conclusion that Taylor was tweeting his pasta rhythms from the sideline, he was, in fact, most likely sitting on a couch. Taylor currently isn’t on the travel list for the team, and his reaction to the game on Twitter could very well be an expression of his thoughts on the matter.

But even more interesting than the tweet itself is the pure concept of a player tweeting about his team in this way during a game. Saturday’s blowout loss taught people a lot about the state of this program and possibly the concern of the inner workings.

Taylor wasn’t the only athlete with an Illini relation to tweet during and after the game.

Former Illini defensive lineman Rob Bain, who was a member of the team from 2012-2016, called out the coaching staff on Twitter during the game.

“Maybe, it’s not all on the players,” he wrote. “Seems that other schools (and) the NFL has found value in those players that were once the scapegoats of the Illini’s woes. Maybe a mass exodus of players, both young (and) old, says something. Maybe quit reading between the lines  (and) just read the story.”

Bain was at the University during the Illini’s three coaching changes from Tim Beckman to Bill Cubit to Lovie Smith.

His thoughts on Twitter sparked a large conversation among Illinois fans and also drew the attention of other current and former Illini who have experienced the Smith coaching regime.

Current members of the team did not hold back, either. Tight ends Brandon Jones and Bobby Walker, along with offensive lineman Zeke Martin, all liked Bain’s tweet, demonstrating quite a bit of frustration could be linked between current players on the team and the coaching staff.

Obvious disconnect between head coach Lovie Smith’s staff and former Illini players can be seen by the 16 transfers that exited the program at the end of last season. Among those transfers was defensive lineman Tito Odenigbo, now at Miami, who retweeted Bain’s tweet with a comment of his own.

“I know one thing, this (Illinois) team definitely has talent,” he wrote.

Questioning of the coaching staff, especially defensively, has been heightened this season. Another Illini transfer, Tre Watson, who played against his former team on Saturday until being ejected in the second quarter of the game, also retweeted the tweet with a comment that read “can’t ignore the signs.”

He didn’t stop there, sporting a picture of himself in a “Kingz of Littyville” tank top under his jersey and commenting on another tweet that “… there are parts of the story you don’t understand.”

Watson’s reaction toward the Illinois program was rather surprising, following in the footsteps of what appears to be several other former players that have a bone to pick with how things are being run.

Graduated Illini Jaylen Dunlap, another positive voice for the program in recent years, shared a tweet similar to Odenigbo’s, referencing that the team has enough talent on the defense to perform well.

Foster’s engagement with the tweet comes off as rather surprising, after serving as a passionate voice for the program while also coming back to the University several times this year.

While for some, the engagement with these tweets is merely hitting the “like” button, it demonstrates an agreement of sorts for the sentiment being said. It seems clear players are feeling a sense of frustration with what is going on behind the scenes, and that may be a reason for the recent play on the field.

In a year where Lovie Smith was perceived to be taking charge, with a majority of the roster comprised of his recruited players, the locker room tension was thought to be a thing of the past. But it may very well be back and stronger than ever.

While the initial Taylor tweet comes off as silly, Taylor is a current player on the team who felt comfortable enough to voice his displeasure, along with many other players that have played under this staff.

To me, that’s concerning.