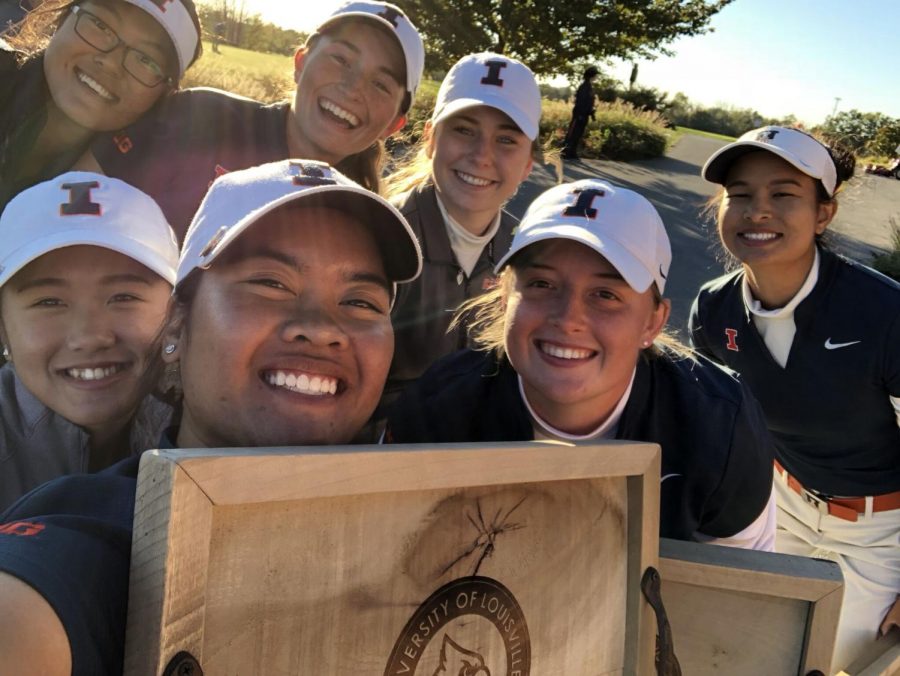 The Illini women’s golf team poses for a picture after taking home a first-place victory at the Cardinal Cup in Louisville, Kentucky. on Oct. 21.

The No. 18 Illinois women’s golf team closed out its fall season in Dallas at the Trinity Forest Invitational. Appearing in the tournament for the first time, the Illini outpaced top-50 ranked teams like Tennessee and Oregon State by at least nine strokes to take the title.

The first-place finish gave Illinois its third team title this season as well as back-to-back tournament wins. The last time the program recorded three wins in the fall season was in 1975 under Betsy Kimpel’s coaching.

The Illini led the competition after the second round on Monday and continued their lead through Tuesday, posting a score of 8-over-par (872). Illinois posted 44 birdies during the tournament, leading the 12-team field.

Despite tough weather conditions both days, the Illini were led by senior Bing Singhsumalee and freshmen duo Crystal Wang and Korknamol Sukaree. All three Illini finished in the top five.

“Embracing the wind (was key),” Singhsumalee said. “We had pretty windy conditions the past two days, so I think just embracing it instead of trying to fight it helped us out.”

To finish her final fall season, Singhsumalee posted a score of 1-under-par (214) for a second-place finish, one stroke behind Oregon State’s Ellie Slama. Singhsumalee and Slama were the only golfers to finish under par.

The Illini’s lone senior posted four birdies in the second round to contribute to her 3-under-par score (69). Singhsumalee stayed consistent in the first and third rounds, posting a score of 73 (+1) with three birdies in each. The Naperville, Illinois, native earned her first consecutive top-three finishes in her collegiate career.

“I feel pretty good (about the tournament),” Singhsumalee said. “I feel like I have been playing pretty consistently and also pretty under, so I think it was a good way to end the fall season.”

After placing third with a 1-over-par score of 217, Wang earned her second top-three finish of her collegiate career. A consistent force for the Illini, Wang started off the tournament strong with a first round score of 71 (-1). Wang followed up in the second round posting a score of 2-under-par (70) with nine birdies throughout the tournament.

Sukaree played steady throughout the tournament, posting scores of 73(+1) in the first and second rounds, then 72(E) in the third. Finishing in the top-10 for three consecutive tournaments, Sukaree tied for fourth with University of Colorado’s Kristy Hodgkins. The freshman recorded 12 birdies, five in the second round.

Rounding out Illinois’ lineup were junior Tristyn Nowlin and Ali Morallos, tying for 29th and 34th, respectively. Both Illini posted even-par rounds during the tournament and had a combined total of 13 birdies.

Competing as an individual for the Illini was freshman Katie Hallinan who tied for 24th, posting a score of 226 (+10). Hallinan has showed steady improvement after playing in the past three tournaments, earning her career-best finish in Dallas. While Hallinan has only competed as an individual, she still feels the energy from the team victories.

“(The team win) feels great,” Hallinan said. “Everyone has played super well this season, and I think it’s just a good way to end as we start our preparation for the spring. It’s the offseason now, and we are still preparing for what’s next, but this win is very exciting.”

While the Illini finished a successful fall season on a strong note, the team emphasized it will continue to improve its physical and mental game in the off-season.

Illinois’ spring season will begin on Feb. 3 in Orlando at the UCF Challenge.