Illinois looks to continue win streak away at Nebraska 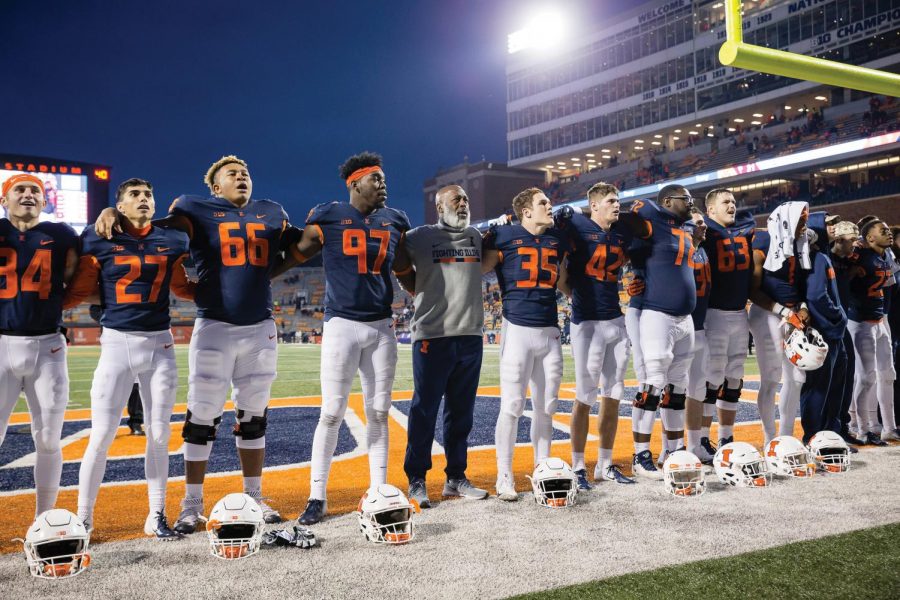 Illinois head coach Lovie Smith sings “Hail to the Orange” with his team after the game against Minnesota at Memorial Stadium on Saturday. The Illini won 55-31.

Illinois got a much-needed win at home against Minnesota last weekend, but as head coach Lovie Smith said during the week, now it’s about stringing two complete games together.

AJ Bush seems to have won the starting quarter job back as he comes off an 18-for-25 performance during which he threw for 216 yards, two touchdowns and an interception while running for 127 yards and two more touchdowns.

Though the Illini opened as 19.5-point underdogs, it’s a position they’re comfortable with. Bush wants his guys to maintain the same energy they brought against the Golden Gophers.

“If we play the same way we played last game, we should have a really good chance of winning the ball game,” Bush said. “I know they have a good offense, so if we have two good offensive showings, it will be an exciting game for fans.”

Junior Reggie Corbin went for 213 yards and two touchdowns on just 13 carries (including one 77-yard score). The performance earned Corbin the Big Ten Offensive Player of the Week honor, something no Illini had done since Wes Lunt during the 2014 season.

Ahead of the Minnesota game last week, during which Smith called the plays on the defense after Hardy Nickerson’s resignation earlier in the week, he went to players on the team and asked them if they’d like to see certain things done differently.

Though Smith ultimately still went about business the way he wanted, players appreciated and responded to the move.

“He’s looking to see what guys may need for a change, to see what would help them play better,” said defensive end Bobby Roundtree. “It felt good, but whatever Coach wants, I’ll do my best to give it to him.”

Smith explained the move as something to bring the team closer together — players and staff alike — and to reaffirm mutual commitment on each end.

“They’re invested; we’re in this together,” Smith said. “That’s how you do it. They should know exactly how I’m going to call every situation.”

Though the Cornhuskers have struggled mightily in terms of wins and losses in 2018, they are no pushovers, especially at home where they’ve sold out every game for years.

They bring the No. 19 offense in the country this week, averaging 468.9 yards per game to date.

Smith and the Illini are well aware of the threat first-year head coach Scott Frost and his high-powered Cornhusker offense present, despite their record.

Led by true freshman Adrian Martinez, Nebraska has had four games with over 500 yards of total offense and has put up at least 450 in its last six games.

Martinez has already set multiple records for the Cornhuskers, including most passing yards as a freshman (1,922 yards) and most total yards as a true freshman (2,402 yards). He also has rushed for 480 yards, the most by any true freshman quarterback at Nebraska.

“(Martinez) is a freshman, but he can throw the ball. He’s athletic; he can beat you with his feet,” Smith said. “An offense with the type of things we talked about what we’re trying to do will be how they attack us.”

Illinois has lost more than it has won so far in 2018, but the team has doubled its win total from last season when it sputtered to 10-straight defeats after opening 2-0.

All of that combined has made for a team that feels very different about itself at this point in the season.

“It’s bringing more hope to the guys, making them more confident,” Roundtree said. “It’s not making them want to quit, like last year, seeing that we doubled our wins.”

A win against Nebraska on Saturday would only be Illinois’ second win in their last eight meetings and the first since a shocking 14-13 home win in 2015.

It would have major implications, though, as Illinois would have its fifth win and potentially could play in a bowl game due to a high APR.

“Some of us, we have more experience,” Roundtree said. “Just losing, having a bad taste from last year, how the season ended. Guys are starting to put their foot down and do extra work because we don’t want to end up like last year. We’re already doing better, why not keep progressing?”