Notes and grades from Illinois’ 54-35 loss at Nebraska 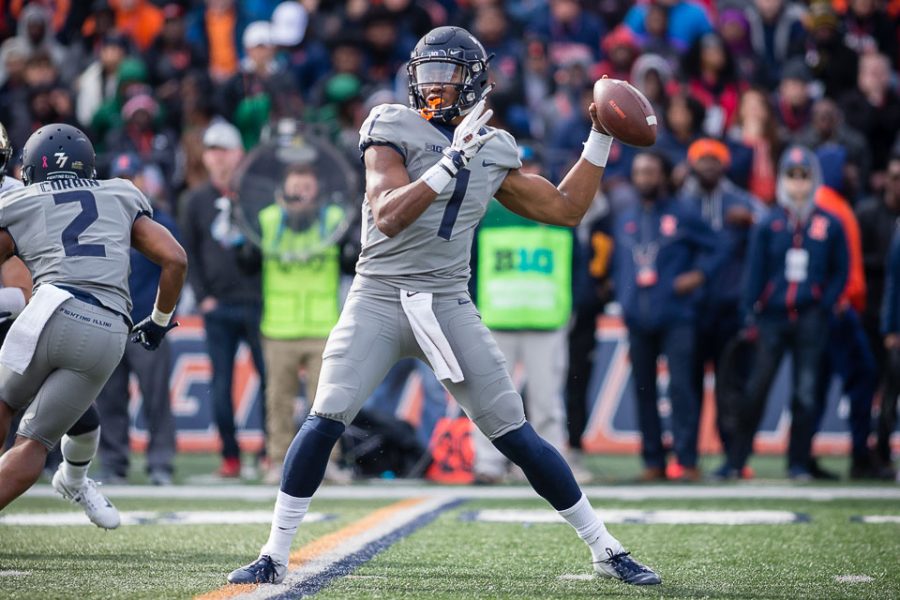 Illinois quarterback AJ Bush (1) passes the ball during the game against Purdue at Memorial Stadium on Saturday, Oct. 13, 2018.

One way to lose games in the Big Ten, especially on the road, is to turn the ball over.

That’s what the Illini did on Saturday, coughing the ball up seven times and losing three fumbles.

In his return to Nebraska, where he didn’t play a snap in 2014 or 2015, quarterback AJ Bush was intercepted twice.

Illinois had plenty of opportunities in what could have been a competitive game in Lincoln but made things easy for Nebraska, which scored 24 points off the five turnovers.

Nebraska scored touchdowns on its first three drives of the game, and when the Illinois defense was able to come up with stops, Illinois fumbled the punt returns twice.

True freshman Carlos Sandy lost one at the Illinois 45-yard line early in the second quarter, and the defense held Nebraska to a field goal.

But the costlier mistake came when fellow freshman Jordan Holmes let one go and the Cornhuskers recovered just seven yards outside the end zone. Only 20 seconds remained in the half, and Nebraska was able to easily score before the break to maintain the momentum for the remainder of the contest.

The Illinois receivers could not hold onto the ball for AJ Bush.

Bush went 11-for-25 for 126 passing yards, a rough stat line that was marred by his receivers’ inconsistencies.

Dominic Stampley dropped multiple passes, one in the end zone and another, while wide open in space, that was picked off by Nebraska after he failed to haul it in.

Sam Mays caught two passes for 32 yards but should have had much better production. He had what looked to be an impressive touchdown catch called back by the officials, but he and the other Illini receivers repeated their theme of dropped balls once again this season.

Ricky Smalling did have five catches for 43 yards, but it was a disappointing day for the unit as a whole. This is an area of the field that has failed to live up to the demands of Big Ten competition after losing veteran Mike Dudek to a season-ending knee injury.

For his part, Stampley owned up to his performance after the game.

One step forward, two steps back on defense

The Illini defense wasn’t put in a position to succeed by the rest of the team, but that doesn’t change the fact that it was steamrolled by Nebraska and its true freshman quarterback Adrian Martinez.

Illinois gave up 606 yards to a now three-win team, allowing the Cornhuskers to average 8.9 yards per play and three players to rush for over 50 yards.

Running back Devine Ozigbo broke off for 163 yards and three touchdowns on 11 carries, while Martinez went for 78 yards on 13 carries and for one touchdown.

Martinez had his way through the air too, completing 24-of-34 passes for 290 yards and three touchdowns, including a 37-yarder to Stanley Morgan, who hauled in eight passes for 131 yards and two touchdowns on the day.

After the defense looked more together under Lovie Smith and only gave up 17 points against Minnesota, the unit was a comparative trainwreck against Nebraska, which narrowly lost to No. 8 Ohio State last week, 36-31.

Illinois could have had a remarkable day on offense had its receivers executed. Despite a lot of drops, the Illini posted 509 yards of total offense behind a 383-yard day on the ground.

Bush set the record for single-game rushing yards by an Illinois quarterback, breaking out for 187 yards on 25 carries. Juice Williams previously set the record with 174 yards against Eastern Illinois in 2008. Bush wasn’t helped either by his offensive line, which gave up three sacks and was frequently beat by the Nebraska pass rush.

Rod Smith has taken this unit to a new level in 2018 after it sputtered throughout last season, but the receivers will need to step it up for the Illini to have a chance to win either of its remaining two games.

Illinois was torched on defense by the Cornhuskers, who produced 606 yards of total offense and 316 yards on the ground.

In a single drive on Saturday, Nebraska converted on three fourth downs, scoring to essentially put the game out of reach at 45-21 late in the third quarter. Tony Adams had an acrobatic interception in the end zone in a bright spot, but the Illinois defense was once again owned by its opposition.

The defensive line had some success, sacking Adrian Martinez three times, and Bobby Roundtree had two sacks and three tackles for loss, but the defense let the game get away and simply has to be better. Lovie Smith has a very important hire to make in the offseason, and he has assistant roles to fill on the defensive staff as well.

This one’s not on AJ Bush.

Those around the Illini quarterback made it a tough return to Lincoln for Bush, but he played with a sense of urgency and made big plays. He scored three touchdowns on the ground and made the Nebraska defense look silly throughout the game as it tried to slow him down. Bush did have a nasty interception after the game was already mostly lost, but he would’ve easily completed more than 50 percent of his passes had his receivers done their jobs.