Rushing proves to be team’s most consistent success 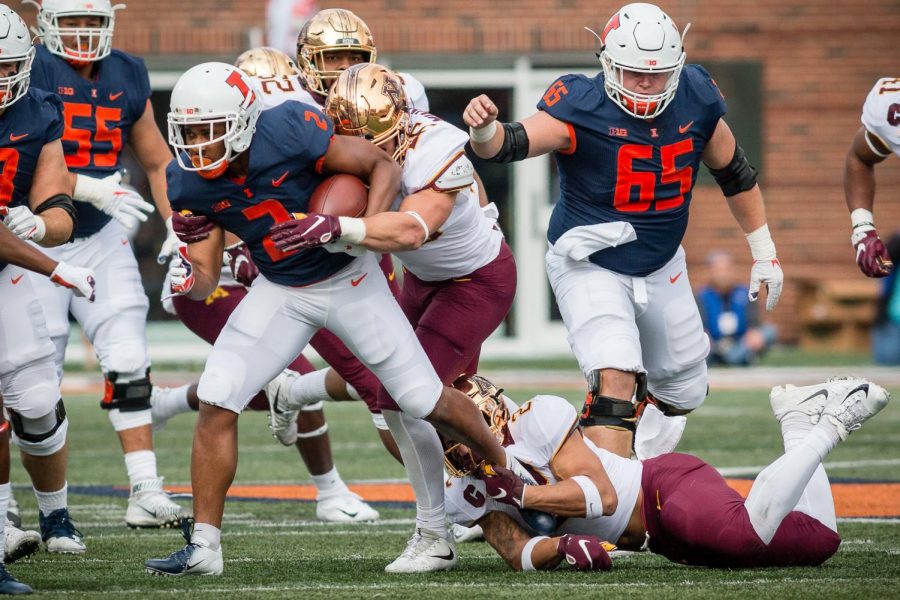 Illinois running back Reggie Corbin tries to break a tackle during the game against Minnesota at Memorial Stadium on Nov. 3. The Illini won 55-31.

Nobody has run the football like the Illini have so far in November.

Through the first half of the month, Illinois led the country with 813 rushing yards, 9.68 yards per carry and 10 rushing touchdowns.

Those stats are reflective of the offensive improvements, particularly on the ground, under Rod Smith first-year offensive coordinator.

But its the running game that has been elite.

Though Corbin left the game against Nebraska with an ankle injury in the first half, he put up 59 yards on five carries, enough to surpass 1,000 yards for the season. The Upper Marlboro, Maryland native is the first Illini ball-carrier to hit 1,000 yards since Mikel Leshoure in 2010.

Corbin is averaging 8.87 yards per carry, which is the secondbest in the country, and leads the Football Bowl Subdivision in rushes of 80-plus, 70-plus, 40-plus and 30-plus yard carries.

He attributes his success to Smith.

“His scheme is ridiculous. I don’t know how he does it,” Corbin said. “When he comes up with something, I’m like, ‘Wow, never saw that, never thought of that — I’ve never seen this before.’”

Led by the line

When running the ball, it helps to have an offensive line that is opening holes, paving the way and giving time for plays to develop.

After struggling last season to compete against Big Ten opponents, the offensive line has looked much more cohesive as a unit in Luke Butkus’ third season coaching the group.

The group remaining healthy has been a plus but so has the development of each of the players, some of which have moved to new positions.

Head coach Lovie Smith singled out Allegretti and Palczewski, who both moved over to tackle during training camp.

“Nick Allegretti has played well in numerous weeks; we have a lot of momentum with his play,” Lovie said. “Alex has done the same thing. You get the same guy each day, working hard, smart player. His position, he’s on an island at times. He’s relentless, tough, you can go on and on about him. (He and Allegretti) are two guys you want to build a program around.”

Palczewski was named to the Pro Football Focus National Team of the Week after the loss at Nebraska, earning a rating of 90.2.

Rod Smith offered high praise for Palczewski, who has made 21-straight starts on the Illinois line.

“He’s kind of blossomed into the player we all thought he would be,” Rod said. “He’s got some talent. He was just a raw, young pup. Now, he’s like a grisly  veteran, almost. I don’t know if you can say that, being a sophomore, but he’s got a lot of starts under his belt. He’s seen a lot of action, a lot of different schemes, but I think his progress is very pleasing to our offensive half since he moved to tackle.”

Generally, Lovie has faith in his linemen down in the trenches. The unit has gone from an area of concern on the team to one of its relative strengths.

“Our offensive line has been playing good football,” Lovie said. “They’ve played against good defensive lines before. We’re looking forward to another challenge (against Iowa).”

Illinois receivers dropped the ball — literally — too often at Nebraska, repeating a common theme that’s plagued the offense throughout the season.

AJ Bush had his worst completion rate of the year, 44 percent (11-of-25), largely because his receivers couldn’t haul in passes.

“We’ve got to catch the football, first and foremost,” Rod said. “You don’t want to have games like that, but we did. We’ve just got to go back to basics and the fundamentals; we caught them the week before.”

It’s pretty late in the season to break fundamental matters all the way down and reteach or teach new techniques to receivers. But something has got to give for an Illini receiving corps that has struggled massively, particularly since losing senior Mike Dudek to yet another season-ending knee injury.

Bush put up a school record 187 yards on the ground, scoring three touchdowns at Nebraska. However, he only threw for 126 yards. With Corbin potentially out this week, there will be a higher demand on the passing game.

The receivers have to do their part.

Iowa was sitting pretty at 6-1 but has dropped its last three games, losing to Penn State and Purdue on the road before falling to Northwestern 14-10 at Kinnick Stadium last week.

The Hawkeyes have been in their games, losing by less than a touchdown in each, but are reeling at 3-4 in Big Ten play after being expected to compete for the Big Ten West title.

A date with the Illini is probably a welcome sight for the Hawkeyes, who have won the last five meetings. Last year, the Hawkeyes pulled away in the second half for a 45-16 win. In Lovie Smith’s first season, Iowa came to Champaign and blanked Illinois, 28-0.

Lovie and Co. are aware the Hawkeyes will probably run the ball a lot on Saturday, and limiting their effectiveness will be instrumental in keeping the game competitive.