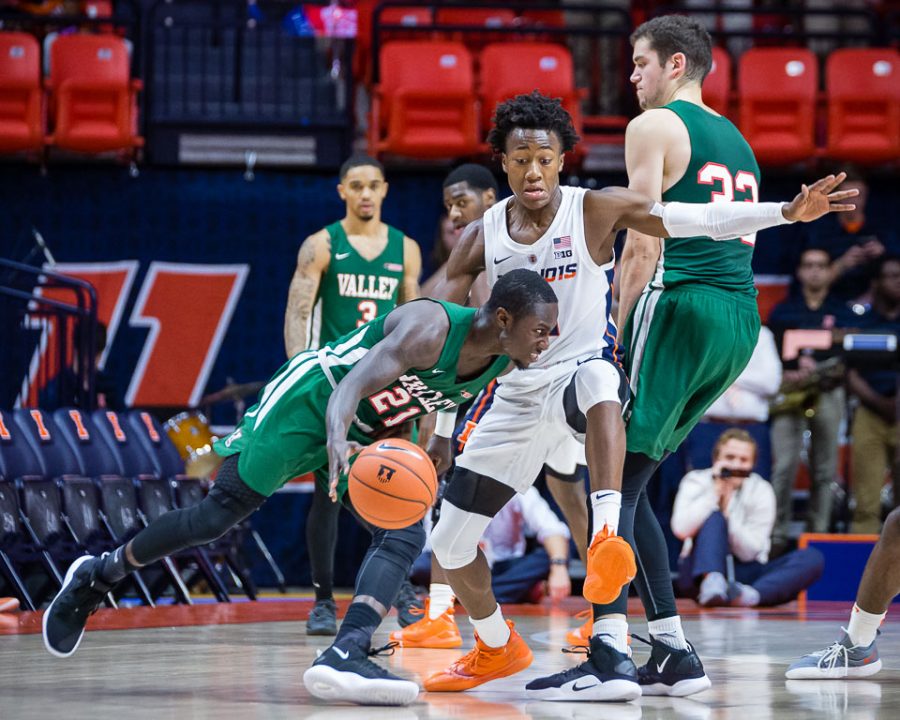 Sunday’s contest on the hardwood between Mississippi Valley State and Illinois was hardly competitive, but it did feature a significant event in its waning moments.

Leading up to it, the Illini were in control. The team began to pull away with seven minutes left in the first half and did not look back on the way to a comfortable victory. Trent Frazier continued his strong scoring output, and the Illinois bench contributed heavily, as Kipper Nichols, Da’monte Williams and Alan Griffin each hit double figures in the scoring column.

Illini fans were certainly satisfied with what they saw, however, most watching probably did not notice the cost of a certain moment that occurred.

With 36 seconds remaining in the game, Brad Underwood had emptied his bench. Walk-ons Tyler Underwood, Zach Griffith, Samson Oladimeji and Drew Cayce were joined by freshman Tevian Jones on the floor as the clock ran down.

Mississippi Valley State junior guard Michael Green got free for a layup to make the score 86-67. The basket, which gave Green his first points of the day, pushed the total score of the game to 153 points combined, which was a half point higher than the total of 152.5 the Westgate Superbook in Las Vegas — commonly considered the most respected oddsmaker for sports — had set for the game.

Why is this significant?

Consider the stakes for those around the country betting on the game’s over/under. Those betting on the over won money by a single basket scored in the final minute of a lopsided game by a player who hadn’t scored all game against a lineup of four players that likely won’t see minutes unless the Illini are blown out.

For those who bet the under, those same factors make the loss hurt a lot.

However, Illinois was not the only college basketball team that broke gamblers’ hearts while making others’ days.

Murray State’s Ja Morant, considered a likely lottery pick in the upcoming 2019 NBA draft, went for 38 points in a 78-72 loss at Alabama on Monday. He had a highlight real dunk that was trending across social media, as Alabama forward Donta Hall was seen jumping out of Moran’s path to avoid being on a poster, despite standing six inches taller than Morant.

The problem with that dunk?

It made the score 74-70, which means those who had the under at 142, as the consensus line around Las Vegas was for the game, lost their bet on the top play.

In Sunday’s Oregon State vs. Long Beach State game, which many Illini fans were undoubtedly watching, Oregon State held a 67-61 with four minutes to play. The total was at 128, well short of the 145.5 over/under the Westgate had on the game Sunday morning before dropping it to 144 at 11:30.

For those betting the under before the drop, the hope was that the two teams would continue to defend hard without fouling. When betting the under, it is not ideal if points are scored without time coming off the clock, aka free throws.

Unfortunately for those bettors, as the 49ers desperately tried to stay in the game, they had to send the Beavers to the line. A pair of makes from the charity stripe by Oregon State’s Zach Reichle, a sophomore who averaged just 1.7 points last season — less than a pair of free throws — made the score 75-72 with 11 seconds left, and that would remain the final score. For those not keeping track at home, the free throws pushed the total from 145 to 147, and those betting the under subsequently lost their money.

After the Supreme Court moved to allow states to decide on legalizing sports betting earlier this year, gambling on sports has become more acknowledged and talked about in public than ever before.

As a result, games like these, that narrowly go one way or the other, deserve far more attention.