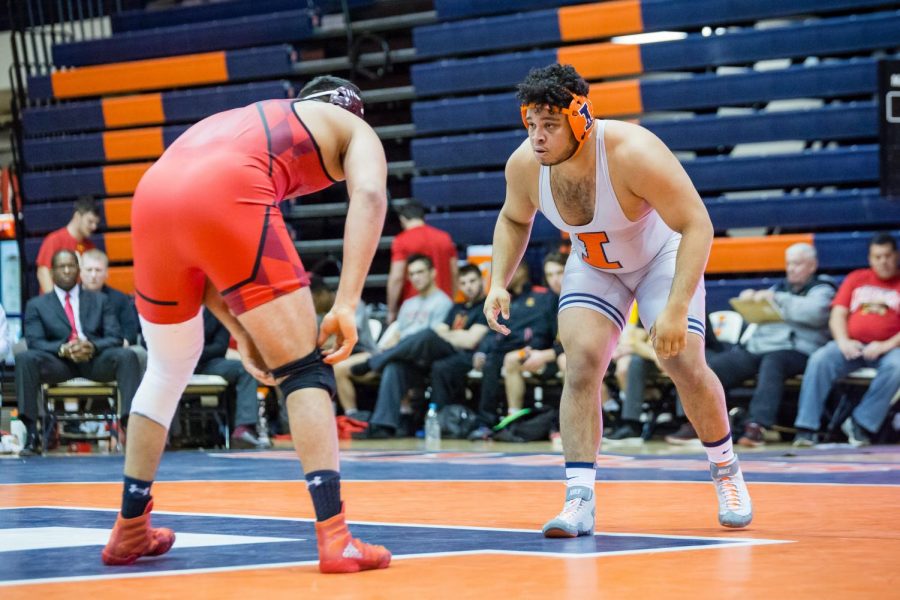 Illinois’ Deuce Rachal wrestles with Maryland’s Youssif Hemida in the 285-pound weight class during the meet at Huff Hall on Jan. 28. The Illini won 25-18. Rachal will compete this year alongside his two brothers who joined the program.

Deuce Rachal has made a name for himself in his time wrestling for  Illinois.

In a recent tournament appearance in St. Louis, the redshirt senior recorded three pins in four matches on his way to winning his weight division. The heavyweight wrestler has turned his reputation into a player who’s hard to miss.

This season, the name Rachal appears two additional times on the roster:;Deuce’s two younger twin brothers, We and Baan, also joined him to wrestle for the Illini.

“You can certainly tell that Deuce is the older brother in the group,” said head coach Jim Heffernan. “Just the way they act around him. He’s a little bit of a watchdog which is good. The twins, they act like twins. They act like they don’t like each other most of the time, but they are really close.”

Rachal’s father started them out young with boxing, jiu-jitsu, karate and judo before the three brothers took up wrestling. We and Deuce joined the sport at the same time; We was five and Deuce was in the fourth grade, Baan started later when he was eight.

The twins l ook up to Deuce and credit him for teaching them a lot of what they know. After all, he always set an example by getting the best grades and being a top-tier athlete no matter where he was.

“He’s a super nice, genuine dude,” We said. “We all grew up in the same place, and we’re like the epitome that if you do work hard and you are dedicated to something, then you can be great no matter where you came from.”

Deuce was a karate instructor, member of the chess club, won a national championship and world championship in Brazilian jiu-jitsu, and after he graduates with a degree in molecular biology, he wants to become a doctor. Deuce wasn’t even planning on wrestling in college, but Heffernan saw him in the state championships and asked him to come to wrestle for Illinois.

Deuce hopes he is able to leave a lasting impact on his brothers both on and off the mat.

The twins made the decision to continue learning from their brother, following him to Illinois. The two have yet to compete this year, but Heffernan sees bright spots in them already, emphasizing Baan’s quality practices and referring to We as a “ball of talent.”

Deuce said his brothers are always optimistic about nearly everything, and the two bring great energy and attitude to the team, which he admits pumps him up.