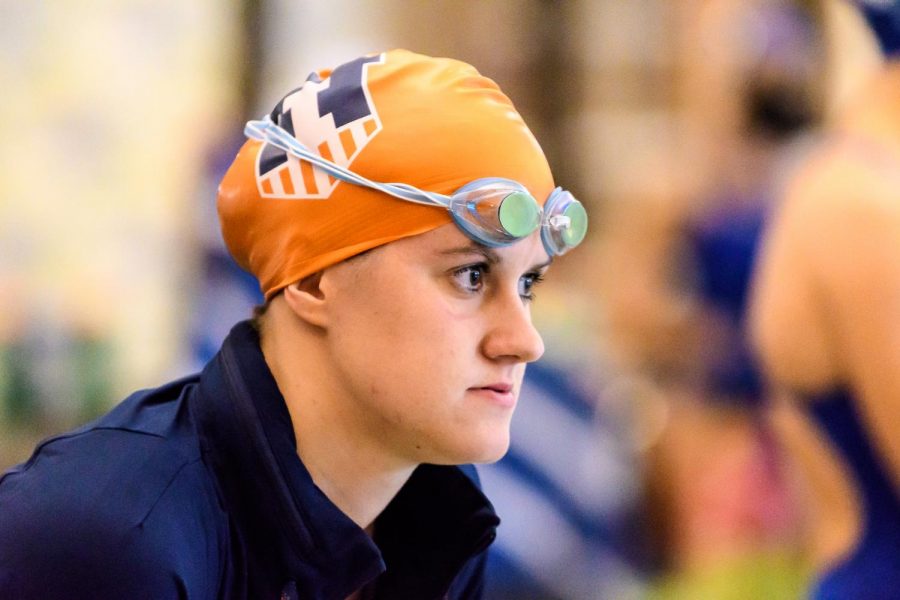 Senior Gabriele Seriunte rests during a meet against Indiana State on Oct. 3, 2017. Seriunte is in the midst of the team’s most successful start of the regular season during her four years in the program.

The Illinois swimming and diving team hasn’t had a 5-2 start to a season during all of senior Gabriele Seriunte’s time with the program.

But the team’s accomplishments this year have put the freestyle and breast stroke swimmer in a position to succeed in the preliminary rounds of USA Winter Nationals Wednesday in Greensboro, N.C.

It’s been a few years since any Illini has qualified for the USA Swimming meet, according to head coach Sue Novitsky. Seriunte qualified in the 100-meter breaststroke at Indiana University-Purdue University’s House of Champions meet with a time of 1:02.40 nearly two weeks ago, edging the 1:03.09 qualifying mark by over a second.

And while the Lithuania native has been a consistent contributor to Illinois’ recent success in the pool, her trip to Winter Nationals presents a new challenge: Seriunte’s first solo meet.

“It’ll be a lot different just being by yourself,” Seriunte said. “I’ll just try to maintain the energy that we would have as a team when we would be at meets.”

So far the 2018-2019 swimming and diving squad has seen a significant boost in energy, according to Seriunte. With 15 newcomers on the roster, the Illini have been using the bulk of the fall to integrate rookie swimmers into the program; but according to Novitsky, the women are having fun — and it shows in their performances in the pool.

“The freshmen are really gaining the experience that they need, and the team’s dynamic is really coming together,” Novitsky said. “They’re having fun as a team, and you can see that with their performances. You know, (we) keep taking steps forward in the right direction. We’re on a good track.”

Despite graduating, 2016 Olympic trials qualifier Samantha Stratford, the Illini have significant depth in their freshman class and have shown their versatility during the fall schedule.

Novitsky said the House of Champions meet at IUPUI on Nov. 16-18 was an indicator of Illinois’ recent progress, especially within its youngest athletes.

“We capped off the fall here with the (House of Champions Invitational), and so we had a lot of lifetime best times and scores on the board,” Novitsky said.

She also mentioned there are a lot of other swimmers right on the cusp of national qualifying times as well.

“The next big step for them is to keep having those breaks or swims so they can keep having the opportunities to swim at higher-level meets,” Novitsky said, “Which is just great experience on the national scene and when we get to the Big Ten qualifiers meet, and potentially NCAAs.”

Illinois is about to enter its winter training block when, according to Novitsky, most of the heavy weight-lifting will be done before the team returns to regular competition in January. While the Illini are focusing on lifting and spending quality time in the pool, they’re also honing in on smaller ways to sharpen their swimming. Novitsky said each athlete has to tweak one or two things in their races, but paying attention to minor details could have a big effect at the end of the season.

“Some of the things I saw that we really need to keep working on are just the little details in our races and just keep cleaning things up,” Novitsky said. “That’s a lot of easy time you can get back and not give away to your competitor.”

Illinois will continue their regular season competition on Jan. 11, 2019 at the ARC Pool against Iowa and Notre Dame.