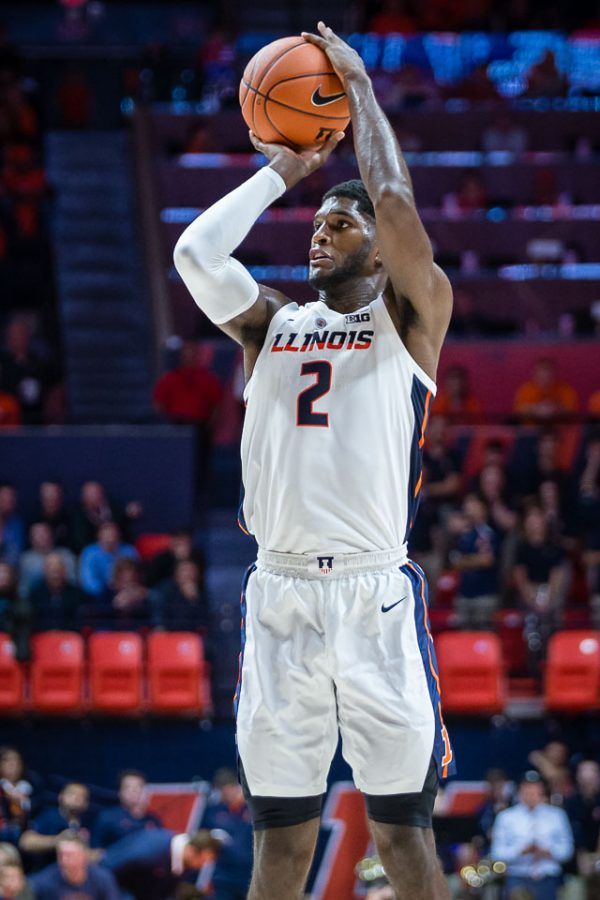 Illinois forward Kipper Nichols (2) shoots the ball during the game against Illinois Wesleyan at State Farm Center on Friday, Nov. 2, 2018.

It was a familiar song for the Illinois men’s basketball team, one it has sung a lot in the last few years.

After a strong first half, followed by a flurry of fouls capped off with a desperate rally, Illinois came away with another loss against No. 19 Ohio State in front of a nearly empty United Center in Chicago, 77-67.

“I was really pleased with the first half,” said head coach Brad Underwood. “For a six- or seven-minute stretch, it was how I envision us.”

That six or seven minutes were when the Illini first rallied from an eight-point deficit to a four-point lead going into the break. The Illini were ahead in the first frame thanks to sophomore point guard Trent Frazier, who scored 11 of his 18 points in the first half, despite playing with two fouls for the last eight minutes of the half.

“I told Trent if he fouled then he was walking home,” Underwood said.

Illinois was able to tap into pressure defense again, which forced over 20 turnovers during the first four games of the year, including the contest against No. 1-ranked Gonzaga. The Illini ended the first half on a 16-4 run, forcing turnovers on five possessions in the last six minutes.

However, after the first half, Ohio State bit back.

Foul trouble crept up on the Illini in the second half, allowing the Buckeyes to make up a chunk of the deficit from the free throw line.

The Buckeyes turned an early six-point deficit in the second half into a 10-point lead with nine minutes to go and in the process fouled out freshman Giorgi Bezhanishvili.

Bezhanishvili got his 10th start of the year alongside his early season starting mate in the frontcourt, junior Kipper Nichols. Nichols, whose struggles have been well-documented this year, put together his best game of the season, putting up 18 points with five rebounds.

“We put Kipper in a lot of actions today,” Underwood said. “I’m proud of him; his effort today was outstanding.”

Nichols hit a three-pointer with about three minutes to go, bringing the Illini within six, continuing a turnover-fueled run for the Illini that got them close, but never with a chance to tie or take the lead.

In the closing minutes, Frazier, who tied Nichols for a team-high 19 points, was put on his back by a physical foul from Ohio State’s Kyle Young. Frazier was visibly in pain from the moment he hit the ground and was rushed by teammates and coaches.

“The way he went down was scary,” Nichols said. “That’s our guy.”

Fortunately for Illinois, Frazier’s injury may have looked worse than it was. He returned to the game and later tweeted he was “fine.”

It was the Illini’s third straight loss of the year and their second Big Ten loss of the year, bumping their record to 2-7 overall. Their next game will be no break from their major-heavy schedule, as they face the University of Nevada, Las Vegas at home on Saturday at 1 p.m.

Despite the continued losses, Underwood isn’t done believing in his squad.

“I feel great about this team,” Underwood said. “These guys have all bought in.”