New players are mainstays for Illini 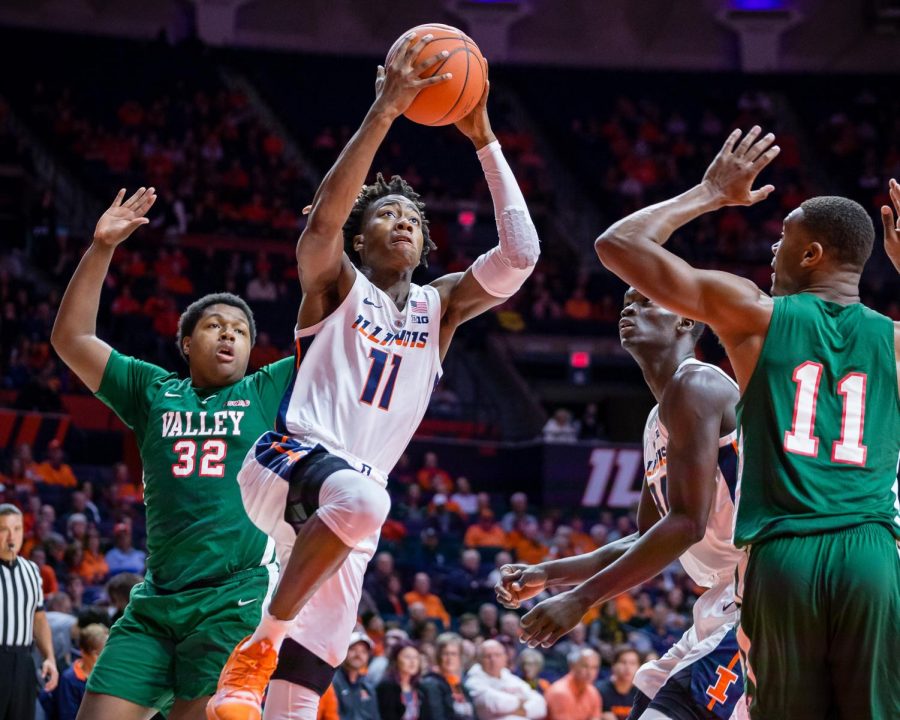 Illinois guard Ayo Dosunmu goes up for a layup during the game against Mississippi Valley State at State Farm Center on Nov. 25. The freshman has been a key part of the Illini’s early season start.

With the latest trip for Illinois being the annual United Center game against No. 19 Ohio State in Chicago, the Illinois men’s basketball team still has more questions than answers. The start of the upcoming schedule doesn’t get a whole lot easier for Illinois, which has already played high-caliber programs like Gonzaga, Iowa State, Xavier and Georgetown on the year.

Freshman Ayo Dosunmu has been struggling on offense in Illinois’ last handful of games. The Chicago-native looked league ready, with his jumper being better-than-advertised. Now a month later, his jumper still remains, but Dosunmu is having a hard time inside the arc. In Illinois games against Nebraska and Notre Dame, Dosunmu went 6-22 from the field. An area of the Dosunmu’s game Illini fans have rarely seen on display is his abilities around the rim, a performance that has even surprised the freshman.

Despite the struggles, Underwood said he’s not afraid of Dosunmu having issues over a long period of time, stating it’s just an adjustment for the young guard.

The head coach is backing up his belief in Dosunmu, putting him on the court for 28.4 minutes per game, good enough for third on the team behind Aaron Jordan and Trent Frazier, respectively.

“Ayo is playing tremendously,” Underwood said. “You don’t see those rotations in high school, that’ll come. Ayo will figure that out because he’s a young man with a lot of pride.”

While Dosunmu and Frazier’s offensive struggles have been hurdles for the Illini recently, the defensive problems have been there all year, too. After being one of the top-25 most fouling teams in 2017, the Illini have continued to foul, averaging 22.5 fouls per game good for 40th in the nation.

“We are working on it in practice,” Dosunmu said. “We have to move our feet and keep our hands up. When you’re shooting free throws every time you foul someone, you can’t get in a rhythm.”

Underwood knows his team struggles without certain players on the floor, but some of those athletes are also in the most foul trouble.

“Giorgi is a vital piece for everything we do, especially on the offensive end,” Underwood said. “He commuted three or four fouls.”

Freshman Giorgi Bezhanishvili stayed out of trouble in the Notre Dame game but was back on a leash against Nebraska, fouling out in just 22 minutes.

Welcome to the Big Ten

“It’s physical — you gotta come out there with your A game, they bully you,” Dosunmu said. “I know what’s in store for me now, and I’m gonna adjust.”

Dosunmu is only one of the Illini’s eight new members on the court this season. Every new player, except freshman Anthony Higgs, has seen playing time, with Underwood leaning most heavily on Dosunmu and Bezhanishvili. Transfer-guard Andres Feliz has also earned his fair share of time on the court, playing 20 minutes or more in five of the Illini’s eight games so far this season.

While Underwood has admitted he continues to work on finding the right lineup, if the early season is a precursor for what the year will bring, Illinois will see a heavy rotation of nearly all the team’s new members.