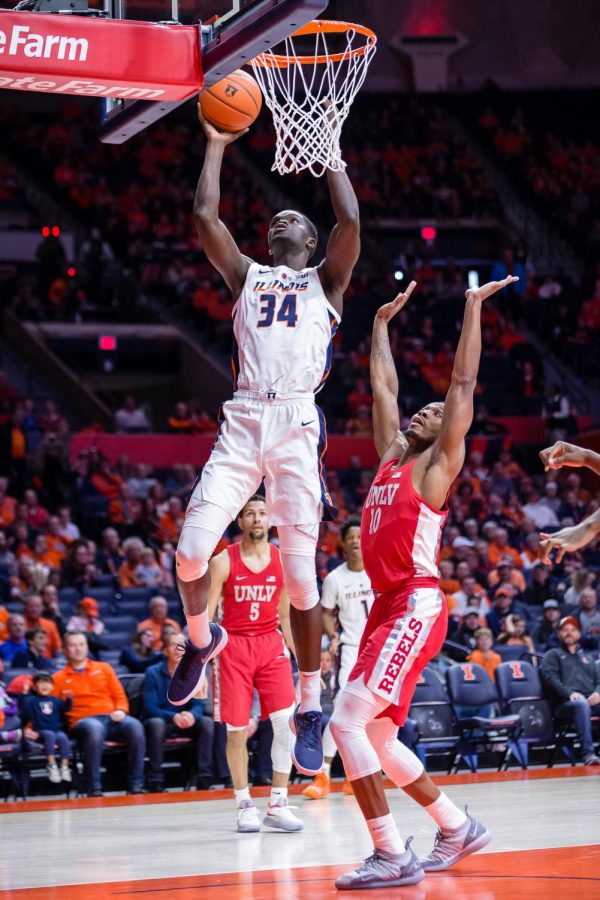 Illinois center Samba Kane goes up for a layup during the game against UNLV at the State Farm Center on Saturday. The Illini won 77-74.

Just a few weeks ago, Illinois men’s basketball fans thought freshman Samba Kane was being redshirted after a string of DNPs against high-tier nonconference teams.

However, his check-in against Mississippi Valley State gave those watching Illinois basketball their first glimpse of the 7-foot player. To head coach Brad Underwood, it was all just part of the plan.

“I never thought one second about redshirting him,” Underwood said.

Kane repaid the trust Underwood had in him during his first real chance to play. In his time on the court, Kane dominated his minutes and made the difference between the two teams. Junior Kipper Nichols called him the “MVP” of the Illini’s first win against major competition.

UNLV’s opposing center was a familiar face for Kane. Fellow freshman Chiekh Mbake Diong grew up with Kane in Africa and played basketball in Senegal before moving to Florida during high school to continue his athletic career. Diong committed to UNLV the year before Kane did the same with Illinois.

Kane was dominant in his time against UNLV and put up career-highs in minutes, points and blocks with 16, eight and two, respectively.

For Kane, who missed the summer session of practices, the regular season has seen a lot of learning and catch-up. At the open practices in the preseason, Kane looked out of place; a step slower or unsure of his position. He struggled to finish against smaller players, and according to Nichols, communication wasn’t an easy ride either.

“He speaks a lot of French sometimes, I don’t even know what he’s saying,” Nichols said.

Against UNLV, the big man didn’t have many problems. Kane not only positioned himself to catch multiple lobs from Illinois guards — the first time they’ve thrown a lob for a dunk to a big man on the roll all year — but also showed off a swagger that didn’t come out during recent practices.

After a block out of bounds, Kane busted out the iconic finger wag that legendary NBA shot-blocker Diekembe Mutombo used to do.

“That was the first time that I’ve ever seen him do the finger wag,” Nichols said. “That was great, it was amazing. I had to follow it up a little bit.”

“The game is about energy, it’s about enthusiasm, it’s about fun,” Underwood said. “That little moment was pretty cool. I’m happy for him.”

No one play, or wag of the finger, really showed Kane’s growth more than the second half, when Kane read the defense and faked a dribble handoff only to keep it himself and rumble down the lane for a two-hand slam.

“He’s been better in practice,” Underwood said. “He’s been putting things together in practice. I was shocked to see him fake the handoff. That’s a basketball read.”

For an Illinois team that’s struggled for years to protect the rim, even going back to before the Underwood days, Kane is a player they haven’t seen in a while.

“I played really good because my teammates supported me,” Kane said. “I have to keep working.”