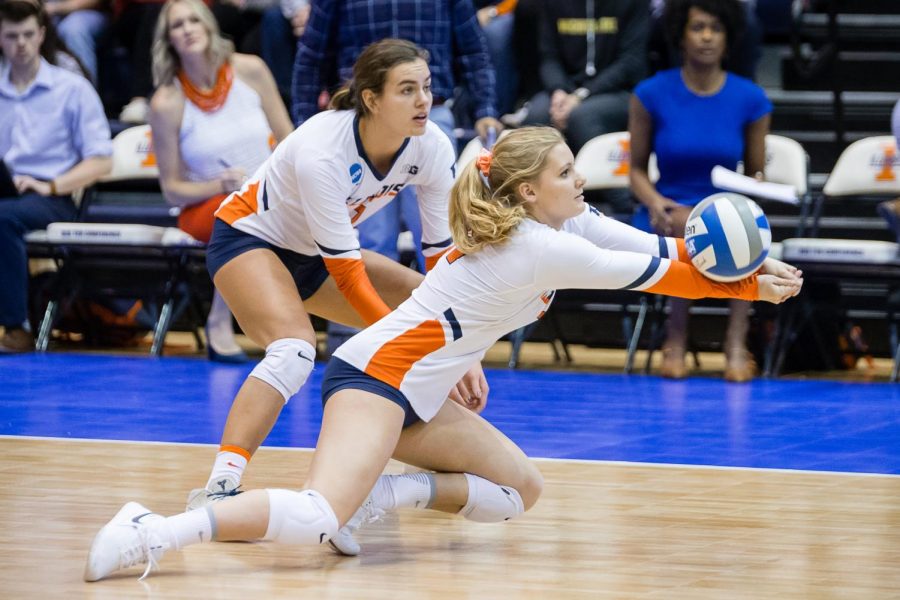 Illinois defensive specialist Caroline Welsh (21) digs the ball during the match against Wisconsin in the Elite Eight of the NCAA tournament at Huff Hall Saturday. The Illini won 3-1.

When I reminisce about my experience with the Illinois volleyball program, I can’t help but think about the numerous amounts of time I’ve locked eyes with one of the players and come up blank.

Interviewing athletes has become a relatively standard practice. Whether I’m throwing a question in the direction of an Illini football player after a tough loss or sitting down for a 45-minute interview with a member of the Illini women’s basketball team, I typically feel calm and collected.

However, something about Illinois volleyball, possibly the sport in general, puts me in a state of awe.

As I sit and watch junior Jacqueline Quade fly through the air for her 25th kill in an Elite Eight matchup against Wisconsin in front of a sold-out Huff Hall crowd, I see her in a cape.

The impressive jump accompanied by the force behind her spike made me immediately turn to Twitter. I think the moment I typed out the following message, I understood why covering Illinois volleyball has felt so different.

“If we are being honest, Jacqueline Quade deserves a comic book series where her power is simply just smashing a volleyball into her enemies.

@IlliniVBall can make it happen I’m sure. #Illini”

Now, let me first double down on this great idea. If you tell me that you wouldn’t read that comic book, you are lying to yourself.

Nevertheless, not only Quade, but all the women on this team clearly have superpowers. I don’t understand the perfect hand-eye coordination, the quick footwork, the acrobatic diving saves and just simply serving a volleyball with power over the net. The women on the Illinois volleyball team do all of this well enough to be a national title contender.

It may be my ignorance to the sport itself, having not dabbled in the art of volleyball past the recreational periods in my gym class, but the athleticism of the women on the Illinois team truly amazes me.

However, I think it’s important to mention one other key superhero quality: the “greater good” trope.

When I speak with the Illinois volleyball players, the intelligence, commitment and respect demonstrated is heroic. No one player is taking the court in a selfish manner, but instead working to promote the success of the person standing to the side and behind them.

Not to mention, the team will even stand on the sideline during games partaking in the wave with the crowd.

Each player from standout setter Jordyn Poulter to freshman Taylor Kuper helps form a team of superheroes, possibly a group that, in the spirit of a recently released trailer, could be known as the Avengers. Hey, after all, Illinois has avenged two of the three losses it has suffered this season.

I think this column would be a fail without the mentioning of one other superhero quality: the ability to be a role model.

Illinois volleyball is full of strong, inspirational women. Even being at an age similar to many of the players or even older than several of them, I find myself looking up to some of the qualities these women have. It doesn’t matter the result of the play, but when the Illini head back to center court for a quick huddle, the smile on their faces is always two sizes larger than their opponents’.

The spirit on this team has been infectious, which should be made evident through the numerous sold-out games throughout the volleyball season.

The women on the Illinois volleyball team are superheroes, and their next mission rests in Minneapolis.

No matter the outcome, the next time we talk, I’ll try to avoid the utter shock.