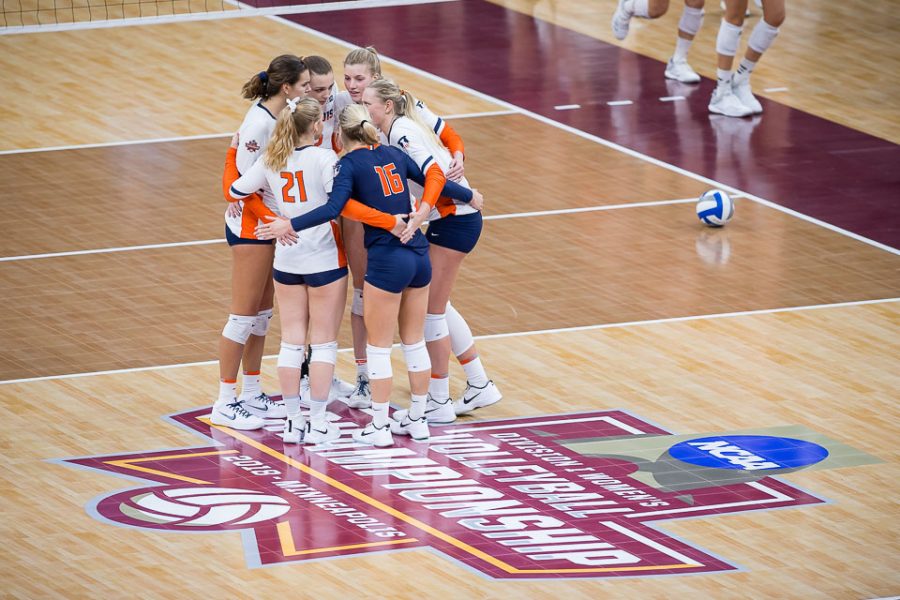 The Illini huddle together after losing the third set in the match against Nebraska in the Final Four of the NCAA tournament at the Target Center in Minneapolis, Minnesota, on Thursday, Dec. 13, 2018. Nebraska defeated Illinois 3-2.

Two years later, the now head coach for Illinois volleyball walked off the Final Four court at the Target Center in Minneapolis with the same result, this time at the hands of his former team.

After going up two sets in the program’s fifth-ever Final Four appearance, the Illini dropped three-straight sets to lose to the defending National Champion Nebraska Cornhuskers in five.

“First off, words can’t express how proud I am of this group,” Tamas said. “We have been beating expectations ever since we kind of started this a couple years ago.”

In the matchup, Nebraska struck first.

The Cornhuskers got on the board with a kill by standout Lexi Sun, but the Illini fed junior Jacquline Quade who picked up the team’s first point of the night. Spacing issues from the back row gave Illinois problems early-on with several balls bouncing awkwardly off the arms of Caroline Welsh and Taylor Kuper.

After Nebraska got out to a quick 4-1 lead, Illinois began to strike back. A diving save by Quade sailed over the net to the corner of the court to start a small run that would get Illinois back within striking distance.

The two teams traded points until Nebraska got out to a three-point lead. However, Illinois once again closed the gap and were down only 15-14 by the first media time.

Working through Quade, the junior had 14 take attempts by the first media timeout.

Continuing to lead the way, Quade gave Illinois its first lead of the night on a service ace to go up 16-15.

“We rely on her a lot,” Tamas said. “Even though everyone knows the ball is going to her, she still find as way to get a kill, keeps us in rallies. Not only that, she’s got to do it on passing and the defensive end, as well.”

It wasn’t until the teams hit the 20-point mark that the Illini started to pull away. Two attack errors on Sun helped stretch the Illini lead to 24-21 and after only one more Nebraska kill, Illinois closed things out on no other than a Quade kill.

With the bench dancing on the sideline, Illinois headed into the second set and dominated from the start, going on a 6-0 run. The Illini wouldn’t hand the lead back over as Quade continued to strike with six more kills and Nebraska handed Illinois six points on attack errors. The team cruised to an easy 25-16 victory to go up 2-0.

“We knew we were going to have to expect a battle,” Tamas said.”We knew they weren’t going away after we won the first two sets.”

The third set saw a flipped script as a refreshed Nebraska team was able to stretch out a large lead in the middle of the set. A 6-1 run for Nebraska, thanks in large part to Mikaela Foecke’s three kills, put the team up 20-14.

It didn’t take long for Illinois to go on a 6-1 run of its own. The set found itself deadlocked at 23-23 until two kills in a row by Foecke finished the set. Illinois had only a .200 hitting percentage in the third set, the team’s worst of the night. As for Nebraska, the Cornhuskers hit a match-high .298.

“Thought we could hopefully close out that third set,” Tamas said. “They caught a couple big plays on us, kind of took control of the match in the fourth set.

With the fourth set underway, both teams looked settled in. The pace slowed down, hitting accuracy became key and both teams suffered from early attack errors.

A long rally with O’Brien and Kuper partnering for some diving saves to keep the Illini alive ended with a Nebraska point that put the Cornhuskers up 11-9 to tie their biggest lead of the set. But keeping with the consistent storyline of the night, Illinois bounced back thanks to two attack errors and found themselves tied 12-12.

Illinois hung around, but couldn’t grab a lead, tying the match eleven times. Down 22-20, the momentum swung fully to Nebraska as a serve went off the arms of Megan Cooney for the ace. A kill by Sun ended the fourth set 25-20 and tied the match up 2-2.

“They definitely took a hit back at us in the third and fourth,” Poulter said. “Props to them for that. I think we managed it pretty well. We were still doing really good things throughout the match. Just really came down to that fifth set, and they got us in that.”

While the regular season stats were in favor of the Illini, who were 5-0 in five-set matches this season, the postseason told a different story.

Illinois had three service errors within the first nine total points of action to give the Huskers a 5-4 advantage. The slow start served tough for the Illini to shake off, but an Ashlyn Fleming service ace tied the set up at 10-10.

After one more point for each, Nebraska went on what would be the last run of the night, scoring four straight and locking a bid to its second-straight National Championship with a 15-11 win.

“Yeah, I mean, I think it’s hard when we’ve never been in such a high-pressure situation before,” Poulter said. “The lights get a little bigger. I think we did a good job of moving on from the next point.” I think it ultimately came down to our execution in those moments.”